Make your own water filter and never buy drinking water again. (5) Why Hasn't Anyone Done This Before? Ingenious Ways to Get Rid of Tons of Garbage. Entrepreneurs Invent City Bench that Absorbs More Air Pollution Than a Small Forest. With great technological advances—like the industrial revolution and the subsequent oil boom—came a great impact on the environment. 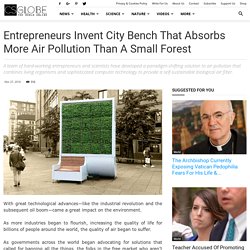 As more industries began to flourish, increasing the quality of life for billions of people around the world, the quality of air began to suffer. As governments across the world began advocating for solutions that called for banning all the things, the folks in the free market who aren’t able to implement their ideas with force, began thinking up actual solutions to our world problems. Greencity Solutions are some of those folks. The tech firm saw the problem with air pollution within larger cities and they sat down and began thinking. After years of trial and error, the team at Greencity Solutions had created the CityTree.

The CityTree is an incredible masterpiece that combines art, science, and biodiversity to provide a real-world solution to the problem of low air quality. Uravu ’s zero-electricity Aqua Panels produce gallons of water from thin air. Uravu, a startup based in Hyderabad, India, has created a device that can produce water from an unlikely source–the air itself. 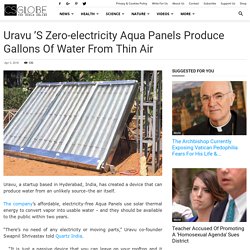 The company’s affordable, electricity-free Aqua Panels use solar thermal energy to convert vapor into usable water – and they should be available to the public within two years. Company Develops Revolutionary Way to Create Leather, Wood, and Bricks from Mushrooms. In a world where the average person consumes more resources than could possibly be regenerated in their lifetime, it’s no surprise to hear that our quickening resource consumption is resulting in a slow-motion collapse of the environment and all life on the planet. 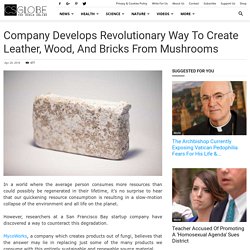 However, researchers at a San Francisco Bay startup company have discovered a way to counteract this degradation. MycoWorks, a company which creates products out of fungi, believes that the answer may lie in replacing just some of the many products we consume with this entirely sustainable and renewable source material. Why Are 96,000,000 Black Balls On This Reservoir? Veritasium took a boat through 96 million black plastic balls on the Los Angeles reservoir to find out why they’re there. 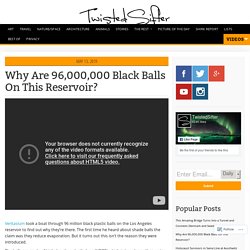 The first time he heard about shade balls the claim was they reduce evaporation. But it turns out this isn’t the reason they were introduced. Fresh drinking water machine can make gallons of water out of thin air. The machines, dubbed Skywater, were created by the Skysource/Skywater Alliance, a team of sustainability experts from Venice, California. 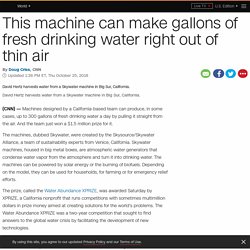 Skywater machines, housed in big metal boxes, are atmospheric water generators that condense water vapor from the atmosphere and turn it into drinking water. The machines can be powered by solar energy or the burning of biofuels. Depending on the model, they can be used for households, for farming or for emergency relief efforts.

Genius Ideas We Should Implement Everywhere ASAP □ This Device Pulls Water Out of Desert Air. Droughts have been making headlines across the world in recent years, from the California water crisis to Cape Town’s severe water shortage, and research suggests 25 percent of the globe could eventually be left in permanent drought due to climate change. 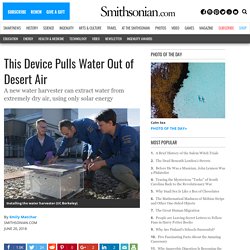 But what if you could simply pull water from the air? That’s the premise of a new technology developed by University of California, Berkeley researchers. It’s a water harvester that can extract water from the air, even in extremely dry climates, using no energy other than ambient sunlight. The key to the water harvester is a new class of materials called metal-organic frameworks (MOFs). These MOFs are solid but porous materials with enormous surface areas—an MOF the size of sugar cube can have the internal surface area as big as many football fields.

Unbroken Ground. Atmospheric water generator. Teen's invention makes water out of thin air. New Conversion Method turns Carbon Dioxide into Stone. A great deal of the carbon dioxide that our industry produces can be extracted at the source before it gets into the atmosphere, where it would otherwise act as a greenhouse gas, trapping solar radiation before it can radiate back out into space. 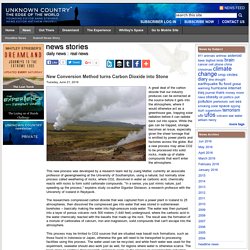 While the gas can be trapped, storage becomes an issue, especially given the sheer tonnage that is emitted by power plants and factories across the globe. But a new process may allow CO2 to be processed into solid rocks, made up of stable compounds that won't enter the atmosphere. How to make edible water "bottles". FREE HEAT FOREVER! (DIY) THE VENUS PROJECT - A NEW WORLD SYSTEM. Solar desalination and water purification from any water source - F Cubed Australia. 50 Questions That Can Help Free Your Mind. These questions have no right or wrong answers. 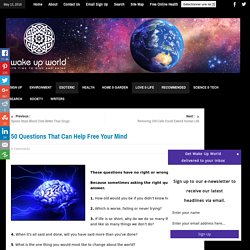 Because sometimes asking the right questions is the answer. Italy changes law to make all supermarkets give unsold food to needy. Italy is set to pass a law that will make supermarkets donate their waste food to charities. 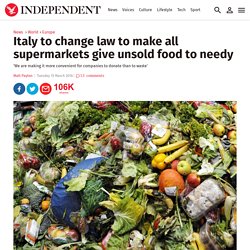 It will become the second European country to pass such laws after the French introduced a bill in February which bans supermarket throwing away or spoiling unsold food. The bill has recieved widespread bipartisan support and is expected to pass the lower house of the parliament on Monday before a final vote in the Senate of the Republic. Unlike France, which fines supermarkets found wasting food, Italy wants to give businesses incentives to donate food and help tackle the country's €12bn waste problem. At the moment - any Italian bar, restaurant or supermarket looking to donate food must declare donations in advance. Radio Waves Burn Seawater!! PLEASE SHARE! Radio Cancer Cures!

Pay-What-You-Can Organic Café in Colorado Celebrates 10 Years. SAME café, short for So All May Eat, started 10 years ago in Denver, Colorado with a simple premise. 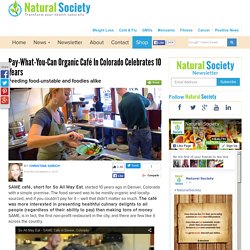 The food served was to be mostly organic and locally-sourced, and if you couldn’t pay for it – well that didn’t matter so much. The café was more interested in presenting healthful culinary delights to all people (regardless of their ability to pay) than making tons of money. SAME, is in fact, the first non-profit restaurant in the city, and there are few like it across the country. The patrons of SAME can eat no matter how much change jingles in their pockets. The owners ask that if you can pay more for your meal, you do, so others can eat too. Instead of visiting a cash register before you leave, you stop by a donation box and offer what you can. SAME works with dozens of local farms and gardeners, a slow food organization, and several community organizations, along with patron volunteers from all over the city to make their non-profit successful.

Effective microorganism. Effective microorganisms (EM) are various blends of common predominantly anaerobic microorganisms in a carbohydrate-rich liquid carrier substrate (molasses nutrient solution) of Em Research Organization, Inc.,[1] and its commercial licensees and manufacturers.[2] In commercial agricultural amendments or for environmental applications, EM is purported to support sustainable practices in farming, improve composting operations, and to reduce environmental pollution.[3] The efficacy of EM on agricultural crops has been studied throughout the world. While some studies stated that Effective microorganisms (EM-A, EM-Bokashi) show no effect on yield and soil microbiology in field experiments as bio-fertilizer in organic farming.

Beside the application in agriculture, EM has been using in wastewater treatment. In 10 Months, This Cafe Has Fed 10,000 People With 20 Tons Of Unwanted Food. By Amanda Froelich Are you aware that in the United States, nearly 40% of the food produced is tossed into the trash? Family Wraps House IN Greenhouse to Grow Food and Stay Toasty Warm. By Kirsten Dirksen. My Off Grid Camper In Winter Snow Storm.

How a group of neighbors created their own Internet service. When you live somewhere with slow and unreliable Internet access, it usually seems like there’s nothing to do but complain. Can DIYbio Save Canada's Salmon? By Brian Berletic Do-it-yourself biology and open source biotech has been gaining ground as the next breakout technology for local hackers and makers. Just like 3D printing, what at first seemed like a novelty is quickly transforming into a set of practical tools and techniques communities can use to enhance their understanding and control over their lives and their living surroundings.

The Lucky Iron Fish: A Simple Solution to a Serious Problem. The Problem: In Cambodia, much of the population lives on a diet of fish and rice and so suffers from iron deficiency, leading to anemia and other serious health conditions. The simple solution is to cook a small piece of iron in the same pot with a meal for 10 minutes, providing 75% of the iron a family needs. This Tower Pulls Drinking Water Out of Thin Air. Designer Arturo Vittori says his invention can provide remote villages with more than 25 gallons of clean drinking water per day. WarkaWater. Marcin Jakubowski: Open-sourced blueprints for civilization. For Children in Need, this Shoe Grows as They Do.

Drowning in Garbage — Some Creative Solutions. These 52 Character Builders For Children, Once a Week, Could Change Their Lives. Peru Is Now Giving Free Solar Power To Its 2 Million Poorest Citizens. The National Photovoltaic Household Electrification Program will cost about $200 million, which is basically nothing in the scheme of most international budgets. PET bottles transformed into photodegradable, waterproof paper. Wall Street Banker Quits to Open $1 Pizza Joint, Customers Pay It Forward to Feed Homeless. Jan 15, 2015. Terence Mckenna - Deconditioning the Human Condition.

When the grocery store shelves are empty, this amazing Food Rising invention will keep you well fed and nourished. Transparent Solar Concentrator Could Turn Your Window Into a Power Source. She Hasn’t Made Any Trash In 2 Years. This Is What Her Life Is Like. German-made ‘miracle’ machine turns water into gasoline. Sweden Runs Out Of Garbage: Only 1% Ends Up In Landfills. These Friends Built A Working Boat Out Of Plastic Bottles. Batteries Included: A Solar Cell that Stores its Own Power.

Nikola Tesla The Secret Movie - Unlimited Free Energy Forever. How mushrooms will save the world. Cloudbuster & Orgone Generator: How to disperse Chemtrails. How to Make "Chembusters" (CB's) German Village Produces 321% More Energy Than It Needs! How plastic bottles can lighten up the darkness. Easy image stabilizer for any camera. German Student Creates Electromagnetic Harvester That Gathers Free Electricity From Thin Air ~ Why Don't You Try This? Amsterdam pays alcoholics in beer to clean streets. 9 Ways to Find Peace of Mind in Tough Times. How to Turn Your Vehicle Into a Statement of Tech Activism Against the Police State.