New Research Turns Mammalian Cells Into Biocomputers. In Brief A team of researchers from Boston University has managed to turn human cells into biocomputers that can perform complex computing tasks. 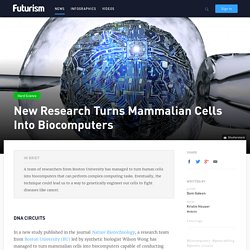 Eventually, the technique could lead us to a way to genetically engineer our cells to fight diseases like cancer. DNA Circuits In a new study published in the journal Nature Biotechnology, a research team from Boston University (BU) led by synthetic biologist Wilson Wong has managed to turn mammalian cells into biocomputers capable of conducting complex computations. This remarkable feat was undertaken within the genes of human kidney cells. For their study, the genetic circuit itself was designed using an existing machinery in cells called a promoter. Using their technique, Wong and his team were able to build 113 different circuits with a 96.5 percent success rate. Meet the Robotic Glove That Lets You Feel Virtual Objects. NASA Study Shows that Antartica is Gaining More Ice than it is Losing. In Brief A study conducted by NASA reveals that Antartica has been seeing more cumulative ice gains than it has losses, and isn't contributing to the rising sea levels as much as scientists originally thought. 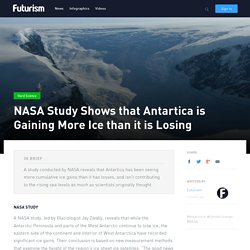 NASA Study A NASA study, led by Glaciologist Jay Zwally, reveals that while the Antarctic Peninsula and parts of the West Antarctic continue to lose ice, the eastern side of the continent and interior of West Antarctica have recorded significant ice gains. Their conclusion is based on new measurement methods that examine the height of the region’s ice sheet via satellites. “The good news is that Antarctica is not currently contributing to sea level rise, but is taking 0.23 millimeters per year away,” Zwally said. Exploring Possibilities Ice loss in Antarctica is generally believed to be reason for the rise in global sea levels, as evidenced by the recent high tides in major coastal cities such as Miami. One and Done: Why You'll Never Have to Get Another Flu Vaccine. In Brief With the creation of a “cross-protecting” vaccine, annual flu shots are a thing of the past. 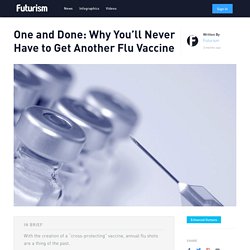 Scientists create different vaccines every year because viruses are constantly evolving. Each year, they predict which viruses will be prominent and create vaccines to combat those specific viruses. If the vaccine and the virus have even minimal differences, the vaccine will not offer much protection.In a new study, scientists are taking an approach that disregards the process of matching a vaccine with a virus altogether. Scientist Craig Venter creates life for first time in laboratory sparking debate about 'playing god'

"We are entering an era limited only by our imagination," he said announcing the research published in the journal Science. 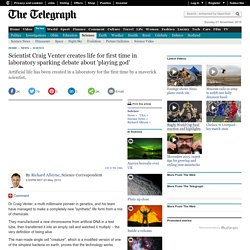 Dr Venter, a pioneer of genetic code sequencing and his team at the J Craig Venter Institute in Rockville, Maryland, have been chasing the goal for more than 15 years at a cost of £30m. First they sequenced the genetic code of Mycoplasma genitalium, the world's smallest bacteria that lives in cattle and goats, and stored the information on a computer. Then they used the computer code to artificially reproduce the DNA in the laboratory, slightly modifying it with a "watermark" so it was distinguishable from the original natural one.

Finally they developed a technique of stripping bacteria cells of all original DNA and substituting it with the new artificial code. The resulting "synthetic cell" was then "rebooted" and it started to replicate. Dr Venter compared his work with the building of a computer. A human genome has 20,000 genes and three billion base pairs. Craig Venter creates synthetic life form. Scientists have created the world's first synthetic life form in a landmark experiment that paves the way for designer organisms that are built rather than evolved. 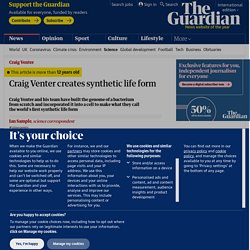 The controversial feat, which has occupied 20 scientists for more than 10 years at an estimated cost of $40m, was described by one researcher as "a defining moment in biology". Craig Venter, the pioneering US geneticist behind the experiment, said the achievement heralds the dawn of a new era in which new life is made to benefit humanity, starting with bacteria that churn out biofuels, soak up carbon dioxide from the atmosphere and even manufacture vaccines. However critics, including some religious groups, condemned the work, with one organisation warning that artificial organisms could escape into the wild and cause environmental havoc or be turned into biological weapons. Others said Venter was playing God. Scientists Create First Self Replicating Synthetic Life. 10 Best Plants to Grow Indoors for Air Purification. Most are naturally drawn to the outdoors for a period of quiet contemplation and/or a restful area to relax in. 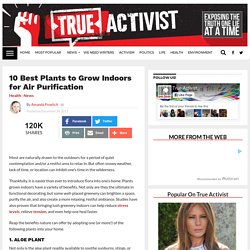 But often snowy weather, lack of time, or location can inhibit one’s time in the wilderness. Thankfully, it is easier than ever to introduce flora into one’s home. Plants grown indoors have a variety of benefits. Not only are they the ultimate in functional decorating, but some well-placed greenery can brighten a space, purify the air, and also create a more relaxing, restful ambiance. Studies have also proven that bringing lush greenery indoors can help reduce stress levels, relieve tension, and even help one heal faster. Reap the benefits nature can offer by adopting one (or more!) 1. Not only is the aloe plant readily available to soothe sunburns, stings, or cuts, it can also detoxify the body and is great for purifying the air. 2. According to NASA, English Ivy is the number one houseplant to grow indoors due to its incredible air filtering abilities.