The Quest for Immortality

WEF White Paper We Will Live to 100. A Bacterium Could Be the Key to an Anti-Aging Pill for Humans. In Brief A bacterium found on Easter Island is the source of a drug that extends life in lab animals, and researchers want to know if it could do the same for humans. 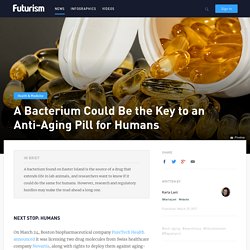 However, research and regulatory hurdles may make the road ahead a long one. Next Stop: Humans On March 24, Boston biopharmaceutical company PureTech Health announced it was licensing two drug molecules from Swiss healthcare company Novartis, along with rights to deploy them against aging-related disease. Researchers Have Found a Way to Delay Aging. Focusing on the Cell’s Power House More and more, scientists are becoming convinced that aging is a disease that can be stopped or, at least, slowed. 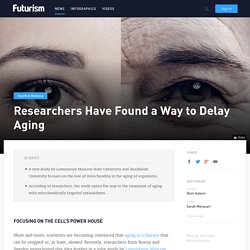 Recently, researchers from Russia and Sweden investigated this idea further in a joint study by Lomonosov Moscow State University and Stockholm University. A Man Given 18 Months to Live Is Now Cancer-Free, Thanks to a New Drug. In Brief Three years after being told he only had 18 months to live, a patient in the UK is now cancer-free after participating in a clinical trial for a new drug.While testing is still in the early stages, this drug could prove to be a valuable weapon in the global fight against cancer. 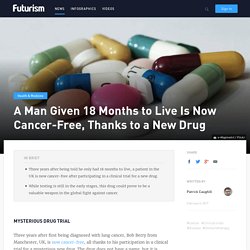 Mysterious Drug Trial Three years after first being diagnosed with lung cancer, Bob Berry from Manchester, UK, is now cancer-free, all thanks to his participation in a clinical trial for a mysterious new drug. The drug does not have a name, but it is reportedly used in combination with immunotherapy to help the body fight off the cancer itself. The trial took place at The Cristie, a cancer research center that’s part of the UK’s National Health Service (NHS) and one of only six centers worldwide participating in the trial.

There is No Limit to Human Life Extension. The Strehler-Mildvan Correlation The scientific team of biotech company Gero recently published a study in the Journal of Theoretical Biology that debunks a long-held misconception regarding two parameters of the Gompertz mortality law — a mortality model that represents human death as the sum of two components that exponentially increases with age. 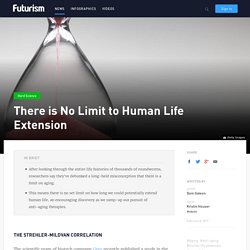 The Gero team studied what’s called the Strehler-Mildvan (SM) correlation and found no real biological reasoning behind it, despite having been held true for more than a half a century now. The SM correlation, derived from the Strehler-Mildvan general theory of aging and mortality, is a mechanism-based explanation of Gompertz law. Specifically, the SM correlation uses two Gompertz coefficients called the Mortality Rate Doubling Time (MRDT) and Initial Mortality Rate (IMR). Key Researcher Suggests People "Have Senses That They Don't Recognize" Hearing Things That Aren’t There Imagine coming home to freshly-baked cookies straight out of the oven, the enticing aroma luring you in. 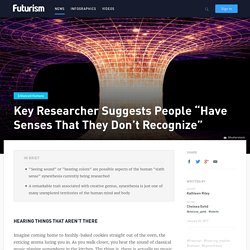 As you walk closer, you hear the sound of classical music playing somewhere in the kitchen. The thing is, there is actually no music playing at all. It might seem like this instance could be chalked up to just hearing things in your head or off in the distance somewhere. However, this could also be something that 4.4 percent of adults experience: a phenomenon called synesthesia. The World Economic Forum Discusses How Might the World Change If We Could Live to Be 150 Years Old? Meet Dr Life: Anti-Aging Doctor - Healthy Living Guru. In 1997 I was a board certified family practice physician that was 59 years old, overweight, poorly conditioned body and rapidly declining health. 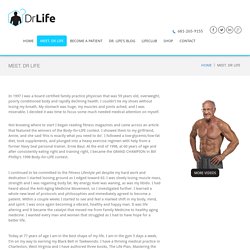 I couldn’t tie my shoes without losing my breath. My stomach was huge, my muscles and joints ached, and I was miserable. I decided it was time to focus some much needed medical attention on myself. Neutron Beam Returns Burned Bones to Their Original Dimensions. In Brief Neutron beam technology was just unveiled by researchers at the Isis facility in Oxfordshire. 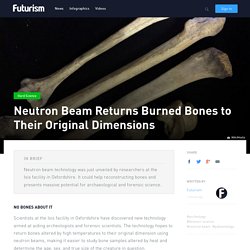 It could help reconstructing bones and presents massive potential for archaeological and forensic science. New Electronic Sensor Can Detect Ovarian Cancer In Your Breath. In Brief These electric sensors offer a cheaper, non-invasive, low-risk solution that may save the lives of ovarian cancer patients through early detection. 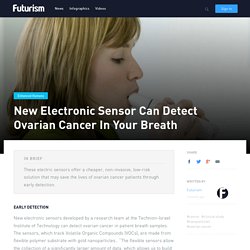 Early Detection New electronic sensors developed by a research team at the Technion-Israel Institute of Technology can detect ovarian cancer in patient breath samples. The sensors, which track Volatile Organic Compounds (VOCs), are made from flexible polymer substrate with gold nanoparticles.. “The flexible sensors allow the collection of a significantly larger amount of data, which allows us to build a physically smaller sensing system, as well as a cheaper one,” explains the study’s lead author, Nichole Kahn.

Saving Lives. Advanced Anti-Aging Clinics Are Redefining the Definition Of "Growing Old" Fountain of Youth Numerous clinics around the London area are bringing the latest advancements in regenerative medicine to the masses (well, to the rather wealthy masses, anyways). 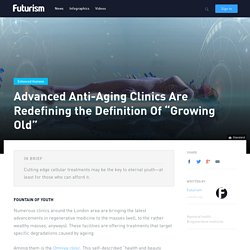 These facilities are offering treatments that target specific degradations caused by ageing. Among them is the Omniya clinic. This self-described “health and beauty mediclinic” specializes in cellular ageing; specifically, they explore new ways to slow the natural deterioration of cells due to age. Tech Company Seeks to Resurrect Humans Using Artificial Intelligence. Humai In the next 30 years, tech company Humai hopes to find a way to allow artificial intelligence and nanotechnology to resurrect the dead. 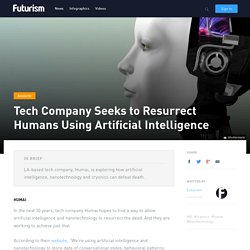 And they are working to achieve just that. According to their website, “We’re using artificial intelligence and nanotechnology to store data of conversational styles, behavioral patterns, thought processes and information about how your body functions from the inside-out. This data will be coded into multiple sensor technologies, which will be built into an artificial body with the brain of a deceased human.” Testosterone Replacement Therapy Increases Longevity In Men. In Brief Testosterone replacement therapy has been around for a while, but a new study confirms that it lowers men's risk of stroke, heart attack, or death from any cause. The research studied data on more than 83,000 men aged 50 or above and having low testosterone levels. The findings have shown a sharp contrast between those who were untreated and those who were treated until attained normal testosterone levels. This New Drug Rejuvenates Aging Brains and Muscles. In Brief UC Berkeley researchers find a small-molecule drug that inhibits TGF-beta1, the protein responsible for aging tissues, potentially leading to a drug that can make brain and muscle tissues act younger.

BioViva tests gene therapy to reverse biological aging. In Brief The announcement serves as the first time that a company will try multiple therapies in one person in an attempt to reverse the biological aging process The Breakthrough By combining two therapies that were developed outside of the US, BioViva USA, Inc. has begun treating an individual using gene therapy intended to reverse the aging process, becoming the first company to do so. Scientists Develop Eye Drops That Could Cure Cataracts. In Brief A revolutionary drug that is administered via eye drops can shrink and dissolve cataracts. Optimal Vision Cataracts, known to be the leading cause of blindness in humans, may soon be cured via a simple eye drop.

This is an amazing breakthrough, considering that the only option currently available is a high-risk and expensive surgery (note: the risk of surgery varies greatly based on medical training and ease of access). Could humans really live forever? 4 Scientifically Proven Ways to Help Reverse Aging. Craig Venter's new longevity startup will make "100 the new 60" I have always thought that the real secret to improved health isn't down the path of better medicines and reduced drug costs (although these are important goals), but rather through improved healthcare systems that are less costly, and can detect patient health problems earlier through new technologies. The problem with better healthcare systems is that there are so many special interests involved these days that you don't get good outcomes. The Obamacare rollout should have been proof positive of that. The only healthcare system which works is one which allows the supply of medical services to meet the demand for medical services and let the suppliers and consumers sort it out.

Top down management only causes chaos. Immortality only 20 years away says scientist. Ray Kurzweil — Immortality By 2045 / Global Future 2045 Congress'2013. Google's AI bot says the purpose of living is 'to live forever' The AI Revolution: Our Immortality or Extinction. Self/Less movie features uploading … to an existing human body. In Self/Less, a science-fiction thriller to be released in the U.S. today, July 10, 2015, Damian Hale, an extremely wealthy aristocrat (Ben Kingsley) dying from cancer, undergoes a $250 million radical medical procedure at a lab called Phoenix Biogenic in Manhattan to have his consciousness transferred into the body of a healthy young man (Ryan Reynolds).

If the Body Is a Machine, Can It Be Maintained Indefinitely? Leaving the Body Behind: A History. Scientists reveal secrets for reaching age 100 (or more) Leukocyte (white blood cell) telomere length in study participants up to 115 years of age. Transhumanist Party presidential candidate to drive ‘Immortality Bus’ across the U.S. Why Do We Age? Scientists Discover the Secret to Keeping Cells Young. How aging cripples the immune system. Thymus (credit: Wikimedia Commons) 'Fountain of Youth' Discovered? Scientists Might Finally be Able to Reverse Aging : News. Scientists Remotely Activate Genetic Target To Slow Aging Process. AMP-activated protein kinase (AMPK) is an enzyme found in eukaryotic organisms and assists in regulating cellular energy levels. Low energy levels activate AMPK, which synthesizes ATP through fatty acid metabolism and increased glucose uptake. Early Results of Human Trials For Anti-Aging Drug Are Promising.