*****Butler Model: Hallstatt: A town of 800 people that gets a million tourists a year. *****Mass tourism: Yarmouth (Life On Mars? See the mice in their million hordes From Ibiza to the Norfolk Broads) Cornwall hit by 'tourist overcrowding' amid UK heatwave. Cornwall is "struggling to cope" with "unprecedented mass tourism" this summer, it is being claimed. 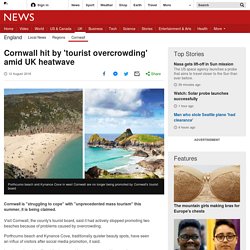 Image copyright www.porthcurno.info Andrew Tate, who lives near Porthcurno, said an "absolutely massive traffic jam" was made worse by people parking along a narrow rural road. "The result was a massive safety problem - you literally could not enter Porthcurno, it was gridlock," he said. Kevin Hall runs a campsite nearby and said deliveries had been late. "It's been unprecedented... "Traffic congestion and inconsiderate parking do present significant challenges to our crews, especially in tourist resorts and areas where the roads are more limited. " This may be good for looking at issues of tourism! #geographyteacher use this to show students a major negative impact! Safesnowdonia: RT WardenEryri: Here's a picture by one of our Volunteer Wardens showing how busy it was at the summit last weekend. Remember to prepare well if you're heading out this weekend! #Snowdon.

#OTD 1965: "Souvenirs offered to tourists coming to Britain are, and I quote: gaudy trash." What, even the cruet set with detachable boobs? 1938 - Miners fortnight at Barry Island (mass tourism) Coney Island in 1949. Beach in Sochi, USSR. 1964. *****Dozens of locals storm Barcelona beach in protest against 'rowdy' tourists. *****Mass tourism is at a tipping point – but we’re all part of the problem. Nearly 30 years ago, researching for a Guardian series on global population pressures, I interviewed the zoologist Desmond Morris. 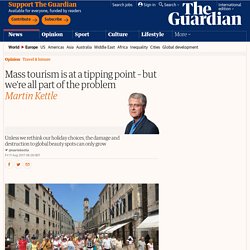 During that interview, Morris said something that was hard to forget. “We have to recognise,” he said, “that human beings may be becoming an infestation on the planet.” Those words came back to me as reports came in about the increasing reaction in many parts of Europe against the depredations of mass tourism. Last week I read a stress-inducing story in the Times about appalling passport-check delays at Milan airport; three days later, I walked through those selfsame passport gates with only a brief and courteous check. Nevertheless, when places from the Mediterranean to the Isle of Skye all start complaining more or less simultaneously about the sheer pressure of tourist numbers in their streets and beauty spots, as has happened this August, it feels as if the always uneasy balance between the visited and the visitors has gone beyond a tipping point.

*****Cruise tourists overwhelm Europe's ancient resorts (Irridex / Media valorisation) Image copyright Getty Images There are places where the surge of global tourism is starting to feel like a tidal wave. 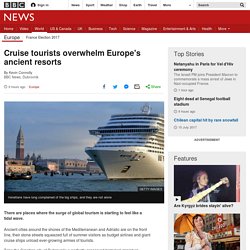 Ancient cities around the shores of the Mediterranean and Adriatic are on the front line, their stone streets squeezed full of summer visitors as budget airlines and giant cruise ships unload ever-growing armies of tourists. *****Idyllic Capri could 'explode' under pressure of mass tourism, mayor of Italian island warns. *****#Map shows origin of #tourism streams into #Fiji. #Australia and #NewZealand account for vast majority. *****Negative impacts of tourism: #Discuss. #MyBarcelona. *****Early tourism: 1936 Outing round the IoW organised by the Wrekin Shropshire MP conveyed by 8 trains and 5 #SR steamers Did MPs really do this? #SR Magazine. 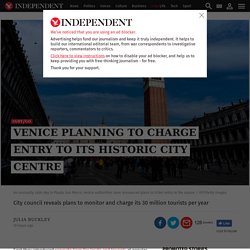 Next came rumblings about wheeled suitcases being banned. In between we’ve had protests about locals being priced out and viral videos of badly behaved tourists swimming in the Grand Canal. And now Venice has taken a step closer towards Barcelona’s deliberate discouragement of tourists by bringing in people-counters at the city’s most popular sites, and planning to introduce a ticketing system for Piazza San Marco, the main square. A city council meeting last Thursday approved plans – proposed by mayor Luigi Brugnaro and councillor for tourism Paola Mar – to effect the changes as quickly as possible. Initially, the counters will merely register the number of people at popular sites, and share the figures in real time on social media and the city’s website, in the hope of deterring visitors from over-subscribed places such as Piazza San Marco and the Doge’s Palace, rather than capping numbers.

*****Lisbon: Impact of tourism. I'm a big fan of the city of Lisbon and have visited numerous times over the years, including having my honeymoon there, 19 years ago. 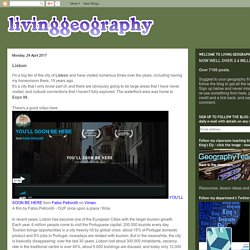 It's a city that I only know part of, and there are obviously going to be large areas that I have never visited, and cultural connections that I haven't fully explored. The waterfront area was home to Expo 98. Two wheels bad: Prague bans Segways. The Czech capital Prague will ban Segway vehicles in its historic centre from early August, Mayor Adriana Krnacova said, after residents complained the two-wheeled electric vehicles were clogging streets and unsafe. 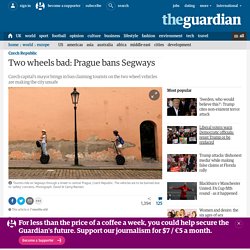 Dozens of agencies have sprung up in Prague in recent years that rent out Segways near or on city squares, and groups of helmet-wearing tourists riding through the narrow, cobbled streets the city’s medieval heart have become a common sight. Prague’s ban follows suit of cities like Barcelona, which banned the two-wheeled vehicles from its waterfront promenade. Around 6.6 million tourists visited Prague last year. “We received countless complaints and we decided to satisfy both residents and even some tourists,” Krnacova told reporters. The ban applies not only to pavements but also bike lanes and streets, which makes it stricter than some Czechs see necessary. “We have been calling for some kind of regulation since 2011... but the council approved a complete ban,” he said. How good could an 18 quid package holiday really be? Holiday '71 went in search of some cheap winter sun #onthisday in, erm, 1971.

Plas y Brenin - Why Snowdonia. The costa del concrete: the Mediterranean coastline then and now – in pictures. @sovietvisuals Beach and restaurant "Jūras Pērle" (Pearl of the Sea) in Jurmala, Soviet Latvia. 1980s.