"...Yet today, the gun industry is almost entirely unaccountable. Thanks to the gun lobby’s decades of efforts, Congress has blocked our consumer products safety experts from being able to require that firearms have even the most basic safety measures.

They’ve made it harder for the government’s public health experts to conduct research on gun violence. They’ve guaranteed that manufacturers enjoy virtual immunity from lawsuits, which means that they can sell lethal products and rarely face consequences. As parents, we wouldn’t put up with this if we were talking about faulty car seats. Why should we tolerate it for products — guns — that kill so many children each year?"
-Barack Obama, January 7th, 2016. Ahmaud Arbery Shooting Ignites Fight to Repeal ‘Stand Your Ground’ Laws. Federal court rules that concealed carry is not protected by Second Amendment.

California federal court ruled that the Second Amendment does not guarantee citizens the right to carry concealed weapons in public, marking a step forward for gun control advocates. 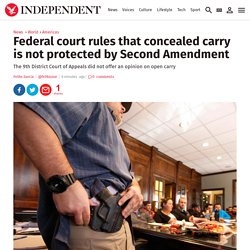 The 9th Circuit Court of Appeals in San Francisco ruled that law enforcement can legally require concealed carry permit applicants to demonstrate they are in immediate danger - or any other reason beyond self-defence - that justifies the need to carry a firearm in public. “The protection of the Second Amendment - whatever the scope of that protection may be - simply does not extend to the carrying of concealed firearms in public by members of the general public,” the court ruled in a 7–4 panel vote. They did not offer an opinion about open carry regulations. Residents of San Diego brought a lawsuit in 2014 after the Sheriff’s Office rejected applicants unable to provide documentation showing good cause for a permit - such as a restraining order, according to the Associated Press.

Gun girls of America: Innocent faces. Pink rifles. Children in grip of a nation's troubling obsession. To match their skirts, flipflops and everything else in their doll-filled bedrooms, the girls have theirs in pink. 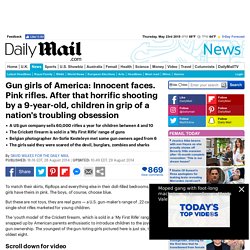 The boys, of course, choose blue. America - The Gun Issue. America's Gun Business, By the Numbers. Guns in America. The 2nd Amendment Explained. Untangling the Gun Lobby’s Web of Self-Defense & Human Rights. Every human life has inherent value and dignity, and every person has the right to life, liberty, and personal security.

These truths are codified in the 1948 Universal Declaration of Human Rights (UDHR). The UDHR was historic, with nations coming together to explicitly recognize the need to protect and preserve these fundamental rights, structuring constitutions to explicitly defend their citizens’ human rights, and particularly their rights to life, freedom, and security. The protection of human rights continues to be a defining pillar to secure a stable, peaceful liberal world order. But in the United States, some groups—such as the gun lobby—are seizing upon this rights-based narrative to justify, dangerously, the right to bear, carry, and use firearms. The United States was built on a shared set of values and principles, with a focus on protecting and preserving inalienable human rights to life and liberty. This argument is destructive. Gun rights are not human rights As U.N. Examination of 'Stand Your Ground' and defendant convictions in Florida. It's Not Just Zimmerman: Race Matters a Lot in 'Stand Your Ground' Verdicts.

During his trial, George Zimmerman's lawyers opted to avoid invoking the controversial "Stand Your Ground" law that the state of Florida approved in 2005, which allows people to "meet force with force, including deadly force," rather than retreat from a confrontation when they are in fear for their lives. 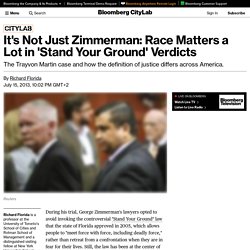 Still, the law has been at the center of the Trayvon Martin case since the teen's death on February 26, 2012. It ultimately gave Zimmerman the cover to pursue Martin and use deadly force that fateful night. Police initially waited 44 days after the shooting to arrest Zimmerman, in part based on his "right to use force" under this Florida law. Arbery case exemplifies abuse of 'stand your ground,' but the damage is broad and systemic. Brunswick is one of those southern Georgia towns with two faces. 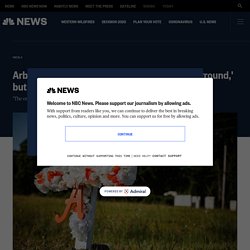 It's a majority black, coastal city of about 16,000, about 1.5 hours south of Savannah where true stories about the negotiated start of integration are, for some, a point of pride. But it's also a place where the Ku Klux Klan bragged just last year on local radio about its efforts to infiltrate law enforcement. So, a few weeks after Ahmaud Arbery, 25, a black man, was shot and killed Feb. 23 by two armed white men in an overwhelmingly white, riverfront Brunswick neighborhood, rumors with very different points of emphasis were rampant. But, when about 50 of Brunswick's leaders — businessmen and clergy, nonprofit officers and elected officials, some black and some white — gathered in its wake, the law and just how it should be interpreted dominated the conversation. The law of self-defense occupied the first 40 to 45 minutes of the conversation, said the Rev. The U.S. Impact of Florida’s “Stand Your Ground” Self-defense Law on Homicide and Suicide by Firearm.

Key Points Question Did the implementation of Florida’s “stand your ground” self-defense law have an impact on homicide and homicide by firearm between 2005 and 2014? 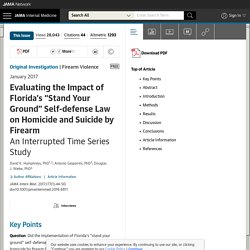 Findings This study used an interrupted time series design to analyze changes in rates of homicide and firearm-related homicide. We found that the implementation of Florida’s stand your ground law was associated with a 24.4% increase in homicide and a 31.6% increase in firearm-related homicide. Meaning The removal of restrictions on when and where individuals can use lethal force was associated with a significant increase in homicide and homicide by firearm in Florida. Importance In 2005, Florida amended its self-defense laws to provide legal immunity to individuals using lethal force in self-defense. 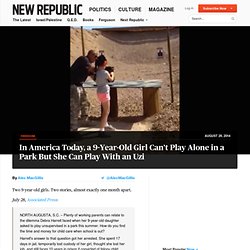 Two stories, almost exactly one month apart. July 28, Associated Press: NORTH AUGUSTA, S.C. – Plenty of working parents can relate to the dilemma Debra Harrell faced when her 9-year-old daughter asked to play unsupervised in a park this summer. How do you find the time and money for child care when school is out? Harrell's answer to that question got her arrested. August 27, Associated Press: 2-year-old accidentally kills his mom in Wal-Mart. Courtesy: KXLY via CNN video (CNN) — A 29-year-old mother was fatally shot Tuesday in an Idaho Walmart when her 2-year-old son in the shopping cart grabbed a gun that was in her purse and shot her in an apparent accident, authorities said. 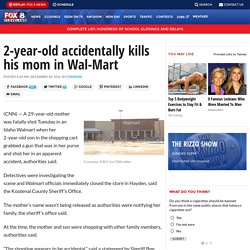 Detectives were investigating the scene and Walmart officials immediately closed the store in Hayden, said the Kootenai County Sheriff’s Office. The mother’s name wasn’t being released as authorities were notifying her family, the sheriff’s office said. At the time, the mother and son were shopping with other family members, authorities said.