The Myth Behind Defensive Gun Ownership. In the early hours of Nov. 2, 2013, in Dearborn Heights, Michigan, a pounding at the door startled Theodore Wafer from his slumber. 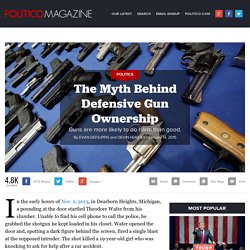 Unable to find his cell phone to call the police, he grabbed the shotgun he kept loaded in his closet. Wafer opened the door and, spotting a dark figure behind the screen, fired a single blast at the supposed intruder. The shot killed a 19-year-old girl who was knocking to ask for help after a car accident. Shortly after midnight on June 5, 2014, two friends left a party briefly. Upon returning they accidently knocked on the wrong door. Story Continued Below. How I Got Licensed to Carry a Concealed Gun in 32 States by Barely Trying. Armed and quite possibly dangerous According to the state of Utah, I earned the right to carry a concealed handgun on a Saturday morning in a suburban shopping center outside Baltimore. 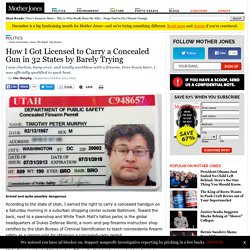 Toward the back, next to a pawnshop and White Trash Matt's tattoo parlor, is the global headquarters of Dukes Defense World, a mom-and-pop firearms instruction shop certified by the Utah Bureau of Criminal Identification to teach nonresidents firearm safety as a prerequisite for obtaining a concealed-carry permit. My achievement doesn't make sense for a number of reasons. One, I don't live in Utah. More guns mean more gun murders. Here's how we know. After the San Bernardino shooting and the intense debate over guns that has followed, some conservative commentators are pushing back on the evidence that more guns mean more gun deaths, citing their own data and charts. 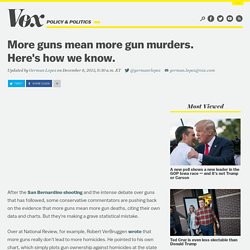 But they're making a grave statistical mistake. Over at National Review, for example, Robert VerBruggen wrote that more guns really don't lead to more homicides. He pointed to his own chart, which simply plots gun ownership against homicides at the state level: National Review "There is actually no simple correlation between states' homicide rates and their gun-ownership rates or gun laws," VerBruggen wrote. Why Hawaii Serves as an Example for Gun Reform. It’s not hard to come up with reasons why Hawaii ranks among the country’s happiest states. 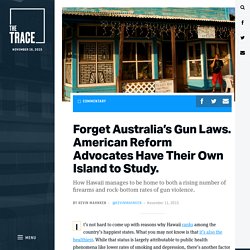 What you may not know is that it’s also the healthiest. While that status is largely attributable to public health phenomena like lower rates of smoking and depression, there’s another factor playing a small part: Its residents are at a significantly lower risk than mainland Americans of dying by gunshot. According to a data calculator maintained by the Centers for Disease Control and Prevention, Hawaii’s rate of gun homicide clocks in at just 0.62 victims per 100,000 people. (The rate for the United States as a whole is 3.99, a nearly sevenfold difference.) Hawaii boasts one of the country’s lowest suicide rates, which have been shown to increase when a gun is kept in the home, and just 20 percent of the state’s suicides are committed with firearms — nationally, guns are responsible for a little over 50 percent. 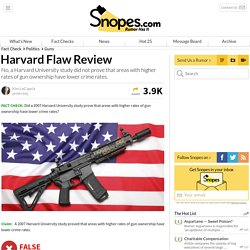 Claim: A 2007 Harvard University study proved that areas with higher rates of gun ownership have lower crime rates. WHAT'S TRUE: Gun rights advocates Gary Mauser and Don Kates jointly authored a 2007 paper in the Harvard Journal of Law & Public Policy arguing that higher rates of gun ownership correlated with lower crime rates. Is There A Link Between Mental Health and Gun Violence? On Friday, October 24th, during the busy lunch hour in the school cafeteria of Marysville-Pilchuck High School, in Marysville, Washington, Jaylen Fryberg opened fire on his classmates, killing one student and wounding four others, three of whom later died from their injuries. 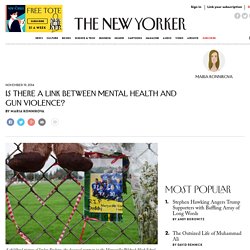 Then he killed himself. Just a week earlier, Fryberg had been crowned prince of the school’s homecoming court—he was a community volunteer, student athlete, and all-around “good kid.” But within hours of the shooting, that picture had changed. Quickly, media outlets analyzed his tweets, Facebook page, Instagram account, and his text and Facebook messages. He was “full of angst” and “anguished.” Roanoke and the Value of Guns. More Guns Don't Mean Less Crime. Posted at 7:27 a.m. on Jan. 12 A new analysis of the impact of right to carry (RTC) laws by Stanford University’s Abhay Aneja and John Donohue and Johns Hopkins University’s Alexandria Zhang debunks the “more guns, less crime” thesis. 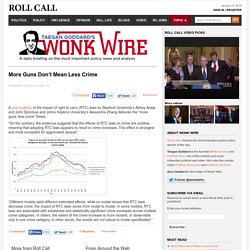 “On the contrary, the evidence suggests that the effects of RTC laws on crime are positive, meaning that adopting RTC laws appears to result in crime increases. This effect is strongest and most consistent for aggravated assault.” “Different models yield different estimated effects: while no model shows that RTC laws decrease crime, the impact of RTC laws varies from model to model. In some models, RTC laws are associated with substantial and statistically significant crime increases across multiple crime categories. More guns, more crime: New research debunks a central thesis of the gun rights movement. Making the world safer, or less safe? 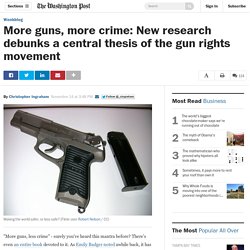 (Flickr user Robert Nelson / CC) "More guns, less crime" - surely you've heard this mantra before? There's even an entire book devoted to it. As Emily Badger noted awhile back, it has become a staple of our national gun control debate: "The idea that more guns lead to less crime appears on gun policy 'fact sheets,' as evidence debunking gun control 'myths,' in congressional committee reports. " The notion stems from a paper published in 1997 by economists John Lott and David Mustard, who looked at county-level crime data from 1977 to 1992 and concluded that "allowing citizens to carry concealed weapons deters violent crimes and it appears to produce no increase in accidental deaths.

" More Guns, Less Crime: A Dialogue - Ta-Nehisi Coates. Sam Hodgson/Reuters My label-mate Jeffrey Goldberg was kind enough to take some time to talk with me about his most recent story in the magazine -- "The Case for More Guns (and More Gun Control)". 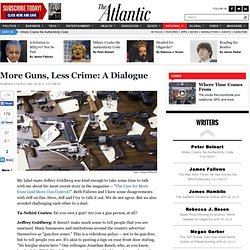 Both Fallows and I have some disagreements with Jeff on this. Here, Jeff and I try to talk it out. We do not agree. But we also avoided challenging each other to a duel. It's Really Hard to Be a Good Guy With a Gun. My dad left my a handful of guns when he died and I recently took a conceal carry class to learn how to use them safely. 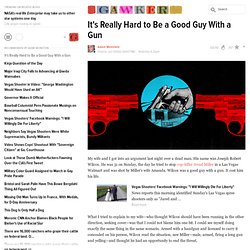 I love guns. Guns are awesome. Fuck yeah! The NRA instructor, who seemed like a pretty level headed guy, was laying out all these scenarios in which everything was merely escalated by having a gun on your person. Homicide - Firearms Research - Harvard Injury Control Research Center. 1. Where there are more guns there is more homicide (literature review). Our review of the academic literature found that a broad array of evidence indicates that gun availability is a risk factor for homicide, both in the United States and across high-income countries. Case-control studies, ecological time-series and cross-sectional studies indicate that in homes, cities, states and regions in the US, where there are more guns, both men and women are at higher risk for homicide, particularly firearm homicide. Hepburn, Lisa; Hemenway, David. Firearm availability and homicide: A review of the literature. 2.

We analyzed the relationship between homicide and gun availability using data from 26 developed countries from the early 1990s. DEPUTIES_TEXT. Deputies on Scene Community Resource Officer Called to “Back Lot” Jefferson County Sheriff’s Deputy Neil Gardner soon would complete his second year as the uniformed community resource officer assigned to Columbine High School. The Journal of Legal Studies, Vol. 27, No. 1 (January 1998), pp. 209-219. Anatomy of a Murder-Suicide. The Strangest Conservative Priority: Prepping a '2nd Amendment Solution' - Conor Friedersdorf. The Bill of Rights offers much smarter, more effective ways to safeguard liberty than preparing for armed insurrection. Reuters In the National Review, Kevin Williamson argues that nearly everyone calling for gun control either doesn't understand or refuses to address the actual purpose of the 2nd Amendment. They talk, he says, as if there's no legitimate reason for an American to have military grade weapons, as if the 2nd Amendment protects mere hunting and home security.

"The purpose of having citizens armed with paramilitary weapons is to allow them to engage in paramilitary actions," Williamson writes. "There is no legitimate exception to the Second Amendment for military-style weapons, because military-style weapons are precisely what the Second Amendment guarantees our right to keep and bear. Walter E. What do I think about this relatively common argument within the conservative movement? I respect that general reasoning. 'Stand Your Ground' Linked To Increase In Homicides. There's Little We Can Do to Prevent Another Massacre. The things that would work are impractical and unconstitutional. The things we can do won't work. The Case for More Guns (And More Gun Control) - Jeffrey Goldberg.

Ten Arguments Gun Advocates Make, and Why They're Wrong. Do Armed Civilians Stop Mass Shooters? Actually, No. A Non-Gun-Owner's Guide to Guns. The NRA Myth of Arming the Good Guys. Replying to my pro-gun friends - Coffee Party USA. This was originally published on December 16, 2012. To a Bright Kid With Trouble(s) - Unwrapping the Gifted. Twelve facts about guns and mass shootings in the United States. When we first collected much of this data, it was after the Aurora, Colo. shootings, and the air was thick with calls to avoid "politicizing" the tragedy. Race, Class, Violence and Denial: Mass Murder and the Pathologies of Privilege.