The DNA Song (Parody of Fetty Wap - Trap Queen) How Being Part of a 'House' Within a School Helps Students Gain A Sense of Belonging. Principal Hayes believes these mentoring activities are to thank for helping reduce bullying and other behavioral problems. Since the house system was introduced at Lake Canyon, suspensions went from nine to zero, she said, and instances of students being sent to the office for discipline greatly decreased. A sense of inclusion and engagement in a common enterprise can have academic benefits as well as social-emotional ones, according to Jennifer Kloczko, the principal of Stoneridge Elementary School in Roseville, California. Two teams of her teachers traveled to observe Lake Canyon’s house system in action as they launched their own. “When kids are really excited about school,” Kloczko said, “they are happier and they tend to learn more.” It’s a proposition supported by scholarly research tying a heightened sense of belonging to increased achievement.

Another touted benefit of houses is easing transitions. “You talk about students all the time,” Gilbert said. 'House' systems at area schools unite students. CINCINNATI -- At Moeller High School , students aren’t just freshmen, sophomores, juniors or seniors — they're also members of a house. 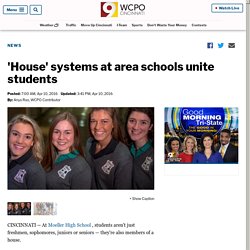 Yes, it's similar to Harry Potter -- only, at Moeller, you're in Zaragoza, Zehler, Eveslage, Quiroga, Pillar or Trinity house. Like at Hogwarts, each Moeller house is named for people and places with connections to the school. Australia's Education System wide. Elementary school finds magic in Harry Potter-inspired house system. What is HOUSE SYSTEM? What does HOUSE SYSTEM mean? HOUSE SYSTEM meaning, definition & explanation. Grisham Middle School: Four Houses, One Family. The House System. HIGH SCHOOL LOL CLUBS TAKE OFF IN AUSTRALIA AND NEW ZEALAND - Learn with League of Legends. The Cybersmile Foundation have partnered with the High School LoL Clubs initiative in the efforts to focus on the behaviors and character traits associated with good sportsmanship by helping students develop the key skills and positive mindset essential to succeeding in competitive sports environments through competitive online gaming. 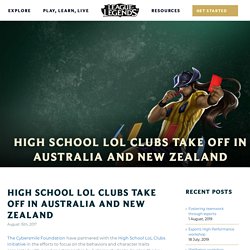 “A high school LoL club enables students to self learn positive behaviors in highly competitive gaming environments. By shaping character through sportsmanship, team strategising and collaborative peer learning we are not just developing the next generation of gamers and esports professionals, we are helping to create more responsible and emotionally aware digital citizens.” – Ivan Davies, Riot Games, Oceania “The LoL high school initiative is an incredible opportunity for schools to address many of the important issues young people are now facing in the digital age. 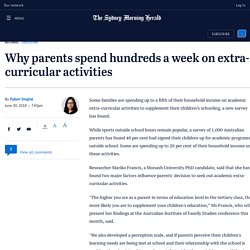 Her son Rafferty Dady, 8, and daughter Luella Dady, 6, both play soccer, swim and do gymnastics lessons every week. In the last school holidays, they also attended a three-day Code Camp, which Ms Allison said they will probably do again in future holidays. "I think extra-curricular activities are important, when I was a kid I did so much," Ms Allison said. "It's a lot to juggle sometimes but I just think it's important to do stuff outside school and meet new kids. " Ms Allison said that she prefers sports, drama or arts activities for her children while they're young, but also begun weekly tutoring for her son and said she likes the "educational slant" to activities such as Code Camp. "I liked that they weren't playing football all day or doing gymnastics," she said. Education reporter at The Sydney Morning Herald. 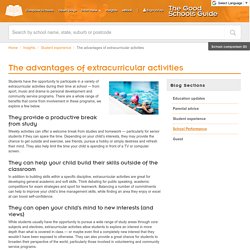 There are a whole range of benefits that come from involvement in these programs, we explore a few below. They provide a productive break from study Weekly activities can offer a welcome break from studies and homework — particularly for senior students if they can spare the time. Depending on your child’s interests, they may provide the chance to get outside and exercise, see friends, pursue a hobby or simply destress and refresh their mind. They also help limit the time your child is spending in front of a TV or computer screen. They can help your child build their skills outside of the classroom. Why school clubs are very important. In my former secondary school, it was compulsory for every student to join at least two clubs. 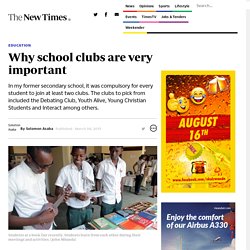 The clubs to pick from included the Debating Club, Youth Alive, Young Christian Students and Interact among others. For either lack of knowledge about the importance of clubs or out of naughtiness, some students protested against this rule and only participated as observers in their clubs. The same is still true today with some opting to concentrate on their books or go home instead of joining others in club activities. After-school clubs 'boost poorer pupils' results' Image copyright Highwaystarz-Photography After-school clubs and sports can improve the academic performance and social skills of disadvantaged primary school pupils, research finds. 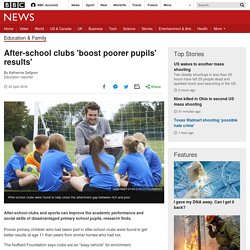 Poorer primary children who had taken part in after-school clubs were found to get better results at age 11 than peers from similar homes who had not. The Nuffield Foundation says clubs are an "easy vehicle" for enrichment. The findings come as ministers plan to use money from a sugar tax on fizzy drinks to fund after-school activities. The researchers - from NatCen Social Research, Newcastle University and ASK Research - analysed information on more than 6,400 children in England taking part in the Millennium Cohort Study, which has been following children born in 2000-01 from birth. They defined disadvantaged children as those whose family income was below the poverty line - that is below 60% of the average household income. High school activities. Study High School in SA - South Australian Government Schools.

South Australia’s capital city, Adelaide, is a friendly welcoming and vibrant city and repeatedly ranks among the world’s top 10. 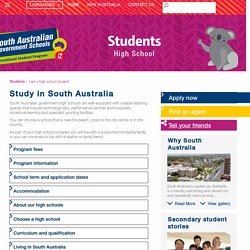 Adelaide beaches are close to the city centre. AUSTRALIAN SCHOOL MORNING ROUTINE!! - STUDY ABROAD. Australian School Answering Machine. ELLLO Views #216 High School. A day in the life of a student in Australia. I am a routine fiend, but after five years at university, I have realised that a structured day is a rare occurrence. 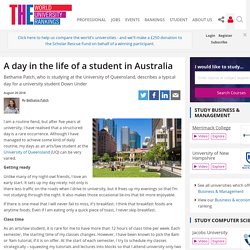 Although I have managed to achieve some kind of daily routine, my days as an arts/law student at the University of Queensland (UQ) can be very varied. Getting ready Unlike many of my night-owl friends, I love an early start. It sets up my day nicely: not only is there less traffic on the roads when I drive to university, but it frees up my evenings so that I’m not studying through the night. It also makes those occasional lie-ins that bit more enjoyable. If there is one meal that I will never fail to miss, it’s breakfast. Class time As an arts/law student, it is rare for me to have more than 12 hours of class time per week.

I will often end up going to university five out of seven days anyway. Lunch. How to start a LoL club: Kristin School. High school League of Legends clubs take many forms. 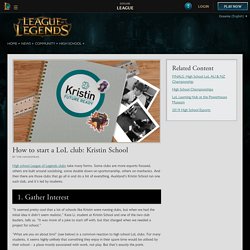 Some clubs are more esports focused, others are built around socialising, some double down on sportsmanship, others on mechanics. And then there are those clubs that go all in and do a bit of everything. Auckland’s Kristin School run one such club, and it’s led by students. “It seemed pretty cool that a lot of schools like Kristin were running clubs, but when we had the initial idea it didn’t seem realistic,” Kate Li, student at Kristin School and one of the two club leaders, tells us.