Power Sessions with Screen. Screen is a terminal multiplexer that allows you to manage many processes through one physical terminal. 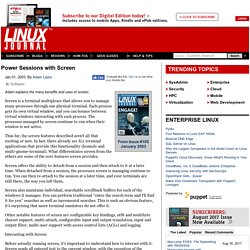 Each process gets its own virtual window, and you can bounce between virtual windows interacting with each process. The processes managed by screen continue to run when their window is not active. Thus far, the screen features described aren't all that exciting or new. In fact, there already are X11 terminal applications that provide this functionality (konsole and multi-gnome-terminal). What differentiates screen from the others are some of the core features screen provides. Using screen for remote interaction. Recently I needed to do some distance education; one of my coworkers wanted me to show him how to do software builds on Linux. 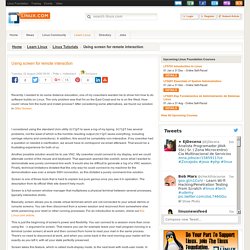 The only problem was that I'm on the East Coast and he is on the West. How could I show him the build and install process? After considering some alternatives, we found our solution in GNU Screen. I considered using the standard Unix utility script to save a log of my typing. script has several problems, not the least of which is the horrible resulting output (script saves everything, including carriage returns and corrections). In addition, this would be completely non-interactive. Another possible solution would be to use VNC. Speaking UNIX: Stayin' alive with Screen. Harry Potter may have his wand, Thor may have Mjöllnir, and Buckethead may have his axe, but all those gizmos pale in power to the QWERTY. 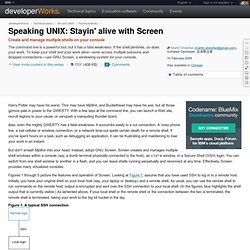 With a few taps at the command line, you can launch a Web site, recruit legions to your cause, or vanquish a marauding thunder lizard. Alas, even the mighty QWERTY has a fatal weakness: It succumbs easily to a cut connection. A noisy phone line, a lost cellular or wireless connection, or a network time-out spells certain death for a remote shell. If you've spent hours on a task, such as debugging an application, it can be frustrating and maddening to lose your work in an instant. 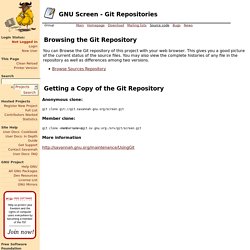 This gives you a good picture of the current status of the source files. You may also view the complete histories of any file in the repository as well as differences among two versions. Browse Sources Repository Getting a Copy of the Git Repository Anonymous clone: git clone Member clone: The Screen Program Linux article. After you use it, you wonder how anyone can live without it and post to your favorite mailing list or forum, agog with the wonders of your new discovery. 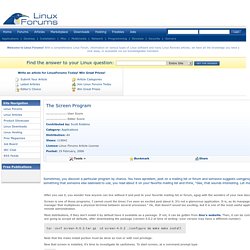 Screen is one of those programs. I cannot count the times I've seen an excited post about it. GNU screen [quick_reference] Screen. Introduction to GNU Screen Screen is a full-screen window manager that multiplexes a physical terminal between several processes, typically interactive shells. 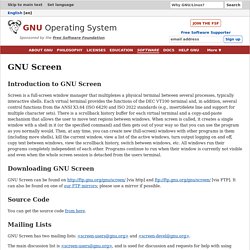 Each virtual terminal provides the functions of the DEC VT100 terminal and, in addition, several control functions from the ANSI X3.64 (ISO 6429) and ISO 2022 standards (e.g., insert/delete line and support for multiple character sets). There is a scrollback history buffer for each virtual terminal and a copy-and-paste mechanism that allows the user to move text regions between windows. GNU Screen. Released under the terms of version 3 or later of the GNU General Public License, GNU Screen is free software. 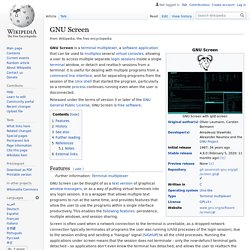 Features[edit] GNU Screen can be thought of as a text version of graphical window managers, or as a way of putting virtual terminals into any login session. It is a wrapper that allows multiple text programs to run at the same time, and provides features that allow the user to use the programs within a single interface productively. This enables the following features: persistence, multiple windows, and session sharing. Screen is often used when a network connection to the terminal is unreliable, as a dropped network connection typically terminates all programs the user was running (child processes of the login session), due to the session ending and sending a "hangup" signal (SIGHUP) to all the child processes.

History[edit] Screen was originally designed by Oliver Laumann and Carsten Bormann at the Technical University of Berlin and published in 1987.[1][2] 10 Screen Command Examples to Manage Linux Terminals. Screen is a full-screen software program that can be used to multiplexes a physical console between several processes (typically interactive shells). 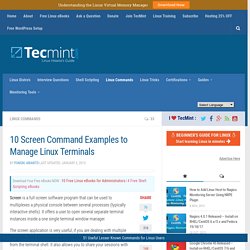 It offers a user to open several separate terminal instances inside a one single terminal window manager. The screen application is very useful, if you are dealing with multiple programs from a command line interface and for separating programs from the terminal shell. It also allows you to share your sessions with others users and detach/attach terminal sessions. On my Ubuntu 10.04 Server Edition, Screen has been installed by default. But, in Linux Mint does not have screen installed by default, I need to install it first using apt-get command before using it.