School for Films, TV Courses, Filmmaking Academy, Movie Classes & Institutes Australia - JMC Academy. Best Movies About College. Screenwriting 101: How To Write a Screenplay. For a truly effective screenplay, you must know your characters backwards and forward. 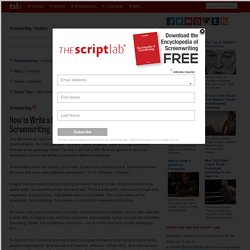 In screenwriting, the moment you begin to imagine character relationships - how your character deals with his parents, his siblings, his coworkers, and all that - you start to explore the world of your story, and suddenly scenes begin to emerge. As you research your character (context, culture, occupation), creating details (attitudes, values, emotions), developing backstory (physiology, sociology, psychology), and establishing personality and behavior, you start putting the character in different situations in your mind, and you begin to imagine him or her in the most mundane and most exciting moments of his life. The courage to deal with the trivial and banalities is something you should develop. Frank Daniel, the former chair of the Film Division at Columbia University and past dean of the School of Cinema-Television at USC, echos the point in five simple words: “A story starts with character.” Write a Movie Script - Screenwriting Tips. 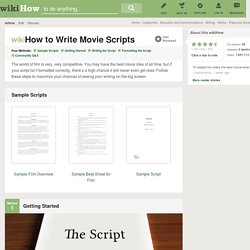 The script, or screenplay, outlines all of the elements (audio, visual, behavior, and dialogue) that are required to tell a story through movies or TV. A script is almost never the work of a single person. Instead, it will go through revisions and rewrites, and ultimately will be interpreted by the producers, directors, and actors.Movies and TV are visual mediums. <img alt="Image titled Write Movie Scripts Step 3" src=" width="728" height="546" class="whcdn">3Flesh out your concept. Writing the Script. How to Write a Screenplay: Script Example & Screenwriting Tips. 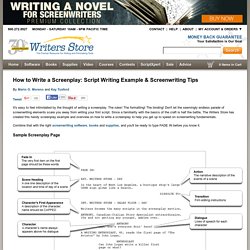 Moreno and Kay Tuxford It's easy to feel intimidated by the thought of writing a screenplay. The rules! The formatting! The binding! Combine that with the right screenwriting software, books and supplies, and you'll be ready to type FADE IN before you know it. Sample Screenplay Page Recommended Screenwriting Software for Writing a Screenplay What is a Screenplay? In the most basic terms, a screenplay is a 90-120 page document written in Courier 12pt font on 8 1/2" x 11" bright white three-hole punched paper. How To Write a Screenplay: The 5 Step Process. Have you ever fantasized about writing a Hollywood movie? 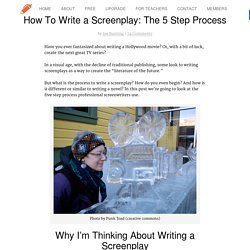 Or, with a bit of luck, create the next great TV series? In a visual age, with the decline of traditional publishing, some look to writing screenplays as a way to create the “literature of the future.” But what is the process to write a screenplay? How do you even begin? And how is it different or similar to writing a novel? Why I’m Thinking About Writing a Screenplay Earlier this week, a friend who’s a lawyer approached me about a writing opportunity. But still, I held back. “Hmm…” I thought. In my experience, most writing projects like this don’t work out, but when they show up, it’s important to give them your best.

How I Learned To Write a Screenplay In college, I took a class with John Wilder, a veteran film and TV writer, who began the class by writing, “STRUCTURE! Afterward, I wrote three short screenplays, one of them with a producer of MTV’s Made. The 5 Steps to Write a Screenplay 1. A protagonistAn antagonistA goal 2. 3. 4. The 10 Best Academic Programs for Aspiring Screenwriters. Students particpating in the USC Writing for Screen and TV Video program. 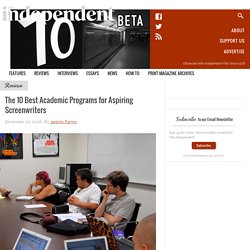 Whether or not to pursue an education in the film industry has long been a hot topic. Clearly, there are identifiable pros and cons of electing to formally study film, more particularly choosing to concentrate on a single element, such as screenwriting. The most notable advantages are the value of an encouraging writing environment, a consistent work schedule, and various networking opportunities, yet pursuing screenwriting also requires a great deal of commitment, namely in time and money, as well as to overcoming the very obstacles inherent in navigating the options. Aspiring screenwriters need only recognize the myriad options that are out there—a vast number of choices range from prominent degree programs to more alternative non-degree or certificate programs. The ten most interesting programs, both degree and non-degree options, are listed below.