Riso, Screen and Other Printmaking 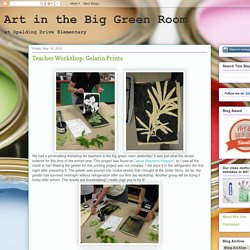 It was just what the doctor ordered for this time of the school year. This project was found at Cassie Stephens blogspot, so I owe all the credit to her! Making the gelatin for this printing project was not complex. I did store it in the refrigerator the first night after preparing it. The gelatin was poured into cookie sheets that I bought at the Dollar Store. How to Make a Zine. Zine-making isn’t about rules or knowledge; it’s about freedom and POWER. 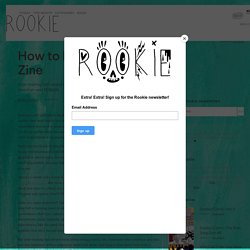 Zines are self-published, small-circulation, often nonprofit books, papers, or websites. They usually deal with topics too controversial or niche for mainstream media, presented in an unpolished layout and unusual design. Everyone, from a major NGO to a teenager like you, can be an author (and also an editor, art director, and publisher) of a zine, and that’s part of what makes them so awesome. Since the invention of the photocopy machine, zine-making has been one most popular forms of independent publishing, especially in underground communities. But it’s hard to generalize about zines, the same way it’s hard to generalize about culture. There’s a whole wiki devoted to zines here. Nowadays (boy I sound old all of a sudden) you can make a digital zine/mag and reach people on the other end of the planet in a blink, but what’s nicer than a little handmade book you can hold in your non-virtual hands? You’ll need: 1. Screen Printing: Cheap, Dirty, and At Home.

The beginner's guide to making your own zines. What is a zine? 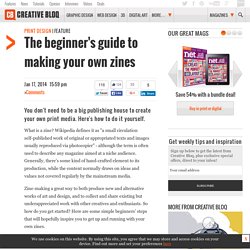 Wikipedia defines it as "a small circulation self-published work of original or appropriated texts and images usually reproduced via photocopier" - although the term is often used to describe any magazine aimed at a niche audience. Generally, there's some kind of hand-crafted element to its production, while the content normally draws on ideas and values not covered regularly by the mainstream media. Zine-making a great way to both produce new and alternative works of art and design, and to collect and share existing but underappreciated work with other creatives and enthusiasts. So how do you get started? Here are some simple beginners' steps that will hopefully inspire you to get up and running with your own zines. Also read: These 10 brilliant indie zines prove that print's not dead 01. Stepping away from the conventional, mass-market methods of producing magazines gives you the freedom to be a bit more creative in the ways in which you choose to deliver art and ideas. 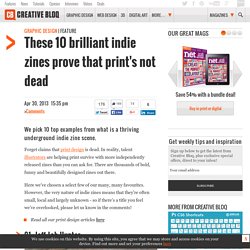 In reality, talent illustrators are helping print survive with more independently released zines than you can ask for. There are thousands of bold, funny and beautifully designed zines out there. Here we've chosen a select few of our many, many favourites. However, the very nature of indie zines means that they're often small, local and largely unknown - so if there's a title you feel we've overlooked, please let us know in the comments! Read all our print design articles here 01. Coming from a town where more than 250 people applied for a single job at downmarket retailer Poundland, Jack Teagle chose to become an illustrator instead and so created Jeff Job Hunter, a funny and beautifully-depicted tale of Ulyssean proportions. 02.

Dominated by bold colour and shapes, illustrator Ben Newman’s graphic novel Ouroboros is a tale of action and adventure. 03. Andy Rementer’s zine Love and Hats is a beautifully illustrated story of a young couple. 04. 05. Art Lesson: Concertina Photo Collage Book. Adventures in DIY Screen Printing. Get started with Risograph printing. Bridging the gap between a conventional photocopier and laser printer, Risograph printing, aka Riso, is a simple yet brilliant tool for anyone interested in producing high quality prints on a shoestring budget. 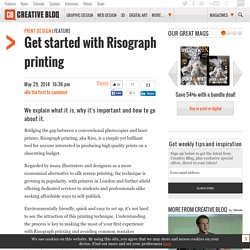 Regarded by many illustrators and designers as a more economical alternative to silk screen printing, the technique is growing in popularity, with printers in London and further afield offering dedicated services to students and professionals alike seeking affordable ways to self-publish. Environmentally friendly, quick and easy to set up, it's not hard to see the attraction of this printing technique. Understanding the process is key to making the most of your first experience with Risograph printing and avoiding common mistakes associated with creating multi-layered Riso prints. Risograph basics Finnish designer Tommi Musturi whose experience with Risograph is relatively new, believes the appeal lies in affordability and ease of use. Colour testing Unpredictable Paper stock.