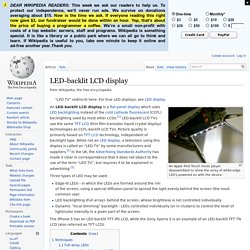 For true LED displays, see LED display. An Apple iPod Touch music player disassembled to show the array of white-edge LED's powered on with the device. TFT Central. During 2013 the desktop monitor market made a noticeable advancement towards providing ultra high definition displays. 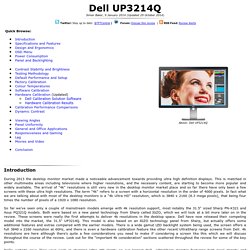 This is matched in other multimedia areas including televisions where higher resolutions, and the necessary content, are starting to become more popular and widely available. The arrival of "4k" resolutions is still very new in the desktop monitor market place and so far there have only been a few screens with these ultra high resolutions. The term "4k" refers to a screen with a horizontal resolution in the order of 4000 pixels. In fact what we are talking about with most of the desktop monitors is a "4k Ultra HD" resolution, which is 3840 x 2160 (8.3 mega pixels), that being four times the number of pixels of a 1920 x 1080 resolution. Calibrate Your Display - XPS 15 Wiki. Again, early stages here and I am not the source of the content (which at present is being plagiarized almost entirely from posts by ajax-jp to the NotebookReview user forum), which means I don't really understand the content I am placing here. 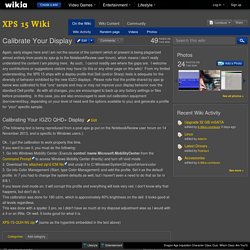 As such, I cannot readily see where the gaps are. I welcome any contributions or suggestions visitors may have (to this or any other page on this wiki)! From my limited understanding, the XPS 15 ships with a display profile that Dell (and/or Sharp) feels is adequate for the diversity of behavior exhibited by the new IGZO displays. Please note that the profile shared by ajax-jp below was calibrated to that *one* sample and may or may not improve your display behavior over the standard Dell profile. Contrast - Lagom LCD test. This test may be affected by your operating system color profile. 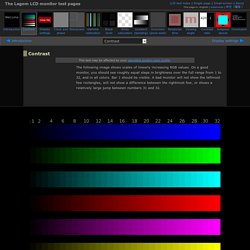 The following image shows scales of linearly increasing RGB values. On a good monitor, you should see roughly equal steps in brightness over the full range from 1 to 32, and in all colors. Bar 1 should be visible. How To Spot 5 Common Defects in Your LCD (Warning: Cannot Unsee!) As the saying goes, what has been seen cannot be unseen. 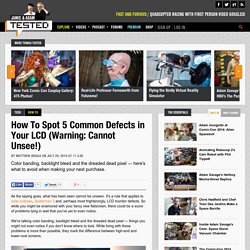 It's a rule that applies to solar eclipses, Spiderman 3 and, perhaps most frighteningly, LCD monitor defects. So while you might be enamored with your fancy new flatscreen, there could be a score of problems lying in wait that you've yet to even notice. Screen burn-in. Burn-in on a monitor, when severe, is visible even when the monitor is not powered on. 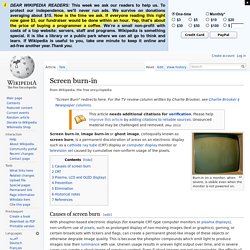 Screen burn-in, image burn-in or ghost image, colloquially known as screen burn, is a permanent discoloration of areas on an electronic display such as a cathode ray tube (CRT) display or computer display monitor or television set caused by cumulative non-uniform usage of the pixels. Causes of screen burn[edit] With phosphor-based electronic displays (for example CRT-type computer monitors or plasma displays), non-uniform use of pixels, such as prolonged display of non-moving images (text or graphics), gaming, or certain broadcasts with tickers and flags, can create a permanent ghost-like image of these objects or otherwise degrade image quality. This is because the phosphor compounds which emit light to produce images lose their luminance with use. Uneven usage results in uneven light output over time, and in severe cases can create a ghost image of previous content. 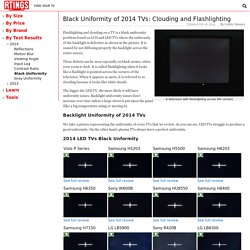 It is caused by not diffusing properly the backlight across the entire screen. These defects can be seen especially on black scenes, when your room is dark. It is called flashlighting when it looks like a flashlight is pointed across the corners of the television. When it appears as spots, it is referred to as clouding because it looks like white clouds. The bigger the LED TV, the more likely it will have uniformity issues. Backlight Uniformity of 2014 TVs We take a picture representing the uniformity of every TVs that we review. 2014 LED TVs Black Unformity Black Unformity of 2013 TVs See our results for 2013 TVs. LCD TV Screen Burn/Clouding Fix. Long time no see guys! 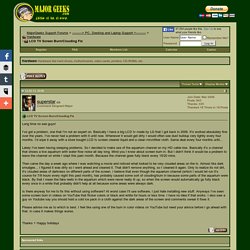 I've got a problem, one that I'm not an expert on. Basically I have a big LCD tv made by LG that I got back in 2009. It's worked absolutely fine over the years. ATTENTION INFO. A Guide to HDTVs. The concept of screen uniformity applies to how the image is distributed across the screen. 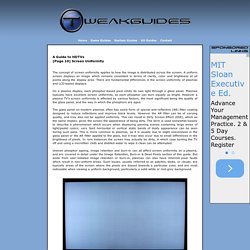 A uniform screen displays an image which remains consistent in terms of clarity, color and brightness at all points along the display area. 004635391f617085f0000000. LG 55EA9800 55" OLED Owner's thread - Page 171. Quote: Originally Posted by tgm1024 I've been wondering for a while now if this isn't related to the single sheet of OLED material (per OLED layer) that LG employs. 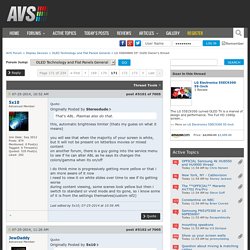 Search for "IGZO" LG 55EA9800 55" OLED Owner's thread - Page 38. Well what a surprise, more shocking developments have occurred in theplague13's gripping saga! I had color slides running all night and day, and by the time tqhe tech had arrived the burned edges were all but barely noticeable. They are surely still there, but now it is only visible on a greyscale and none of the slides. But that's not all! Here's the really funny part, 4 more blue pixels died WHILE the tech was looking at the set!! Applied Materials. The AKT-PiVot system’s modular architecture delivers significantly faster cycle time and enables a large variety of configurations to maximize production efficiency. Unlike traditional in-line systems, the AKT-PiVot’s parallel processing capability eliminates bottlenecks caused by different process times for each film layer.

Normally, this appears as an uneven cloudiness that usually can be seen only when the screen image is dark or completely black. But as TVs get ever thinner, we've seen a new problem that can cause even more noticeable type of non-uniformity, which, at its worst, can be distracting even in bright scenes. For several years, both plasma and, especially, LCD TVs with LED backlights have been getting thinner and thinner as bezels and frames shrink, resulting in aesthetically pleasing, super-slim, borderless TVs. The new type of non-uniformity is caused by the LCD panel getting pinched and contorted by the cabinet assembly and producing bright patches of illumination, typically around the borders of the panel. Next-Generation Displays: Reality Sets In. As companies around the world showcased their latest developments, Display Week 2013 proved to be a good bellwether for how next-generation screen technologies were faring in the marketplace. As an extension of the trend toward higher-resolution displays, a lot of attention was focused on 4K displays, which have the same resolution as four standard 1080p HDTVs tiled together.

And LG Electronics and Samsung both continued to tout their 55-inch organic light-emitting diode (OLED) television displays, which had been shown before but are now being offered for sale. One of the themes of this year’s show, run in Vancouver at the end of May by the Society for Information Display, was whether the industry can deliver these next-generation displays in large numbers. Manufacturers cannot yet produce enough units to have viable mass-market products, and they’re spending a lot of time and money to achieve that goal. Hyperlink. IGZO, in depht. Asus Zenbook UX301 vs. Samsung ATIV Book 9 Plus Comparison Smackdown by MobileTechReview.

And believe me, they cost plenty! Pixel mania: Apple 27-inch iMac with 5K Retina display. Lenovo Yoga 2 Pro vs Asus Zenbook UX301 LA comparison. In this post we’re going to pitch the Asus Zenbook UX301LA against the Lenovo Yoga 2 Pro. These two are some of the best ultrabooks money can buy right now, so I’m pretty sure many of you have considered at least one of them. They don’t just pack Intel Haswell hardware in several different configurations, sleek bodies and high resolution displays, each of them actually has a few aces down its sleeves.

Asus squeezed a 28W platform inside their top-version, which makes it about 15 to 25% faster than the top-tier Yoga while performing various tasks. They also put a stunning screen on this laptop and dressed it in a stylish, yet highly prone to fingerprints, glass coating. The Lenovo Yoga 2 Pro has the more affordable prices on its side and the versatile form factor, as the screen flips 360 degrees on the back and allows you to use the device both as a regular laptop, but also as a stand or even as a large tablet.