Report: How People Really Use Tablets While Watching TV. About half of all smartphone and tablet owners use these devices while watching TV. 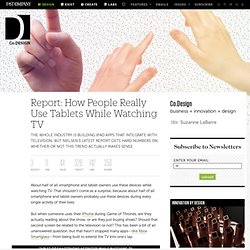 That shouldn’t come as a surprise, because about half of all smartphone and tablet owners probably use these devices during every single activity of their lives. But when someone uses their iPhone during Game of Thrones, are they actually reading about the show, or are they just buying shoes? Should that second screen be related to the television or not? Facebook Doesn't Need A Phone. It Wants Them All. What do you use to send instant messages, maintain your calendar, take and share photos, check your email inbox, leave voice messages, look up restaurants nearby, and store your contacts when you’re away from your desktop computer? 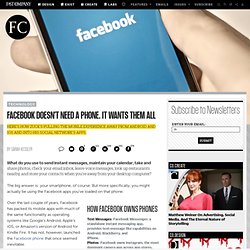 The big answer is: your smartphone, of course. But more specifically, you might actually be using the Facebook apps you’ve loaded on that phone. Over the last couple of years, Facebook has packed its mobile apps with much of the same functionality as operating systems like Google’s Android, Apple’s iOS, or Amazon’s version of Android for Kindle Fire. It has not, however, launched the Facebook phone that once seemed inevitable. That's because your phone already is a Facebook phone. Xbox SmartGlass Review: Microsoft Invades The Second Screen. Xbox SmartGlass is Microsoft’s new second-screen experience for the Xbox 360. 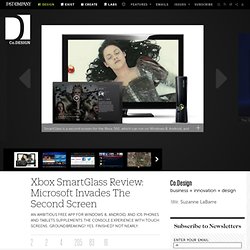 Using a Windows 8, Android, or iOS device, you can launch apps, play music, and control new game and video content, interacting with an additional layer of what’s on your TV through a unique touch-screen interface. So let’s get the big question out of the way first: Is SmartGlass the ideal second-screen interface for your living room? Not yet, but it could be. SmartGlass teeters between simple genius and complete impracticality, ambitious scope and totally overlooked details. Mobile microblogging: Using Twitter and mobile devices in an online course to promote learning in authentic contexts. Data Monday: Smartphones in a Multi-Device World. In a recent study into the behavior of PC, smartphone, and TV users, Google found that 90% of their participants used multiple devices sequentially and 81% used multiple devices simultaneously. 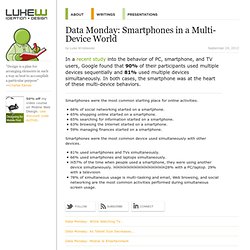 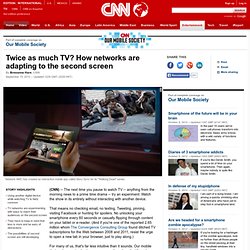 Using another digital device while watching TV is fairly commonTV networks are experimenting with ways to reach their audiences on the second screenThey have to keep in mind that less is more and be wary of distractionsThe possibilities of second screen are still developing. Nintendo's Wii U GamePad Transforms The Tablet, Doubles The Gaming Stakes.

At a press event in New York today, Nintendo of America's president Reggie Fils-Aime announced that the Wii U will launch on Sunday Nov. 18. 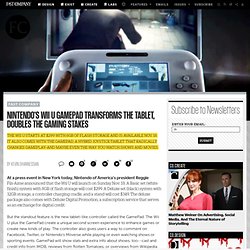 A Basic set (white finish) system with 8GB of flash storage will cost $299. E3 2012: Game makers focus on second screens. LOS ANGELES – If the gaming industry agreed on one idea at this week's Electronic Entertainment Expo, it's that playing video games on just one screen is no longer enough. 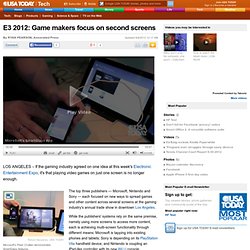 The top three publishers — Microsoft, Nintendo and Sony — each focused on new ways to spread games and other content across several screens at the gaming industry's annual trade show in downtown Los Angeles. While the publishers' systems rely on the same premise, namely using more screens to access more content, each is achieving multi-screen functionality through different means: Microsoft is tapping into existing phones and tablets; Sony is depending on its PlayStation Vita handheld device; and Nintendo is coupling an iPad-like controller with its new Wii U console.

"I don't know who has the best approach," said Martin Rae, president of the Academy of Interactive Arts and Sciences. Insights show how consumers use different devices together. How many times have you started reading an email on your phone while commuting, and then continued it on your laptop when you got home? 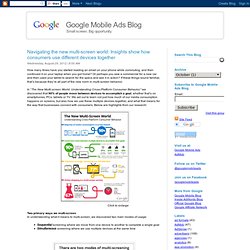 Or perhaps you saw a commercial for a new car and then used your tablet to search for the specs and see it in action? If these things sound familiar, that’s because they’re all part of the new norm in multi-screen behavior. In “The New Multi-screen World: Understanding Cross-Platform Consumer Behavior,” we discovered that 90% of people move between devices to accomplish a goal, whether that’s on smartphones, PCs, tablets or TV. We set out to learn not just how much of our media consumption happens on screens, but also how we use these multiple devices together, and what that means for the way that businesses connect with consumers. Outlook Report Vol 10. Mobile devices are used frequently in conjunction with other screens, including the big TV in your living room. How Did Detroit Labs Build A Successful Business? By Letting Employees Screw Around.

Reports of Motor City’s death have been exaggerated, although not greatly so. 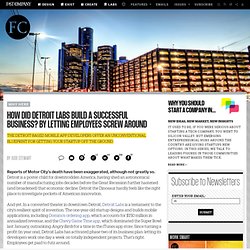 Detroit is a poster child for downtrodden America, having shed an astronomical number of manufacturing jobs decades before the Great Recession further hastened (and broadened) that economic decline. An integrating design? Designing for Context: The Multiscreen Ecosystem. To create applications and systems that are easy to use, it is crucial to understand the user and the context in which the app will be used. 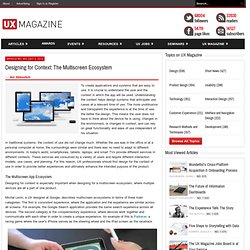 Understanding the context helps design systems that anticipate use cases at a relevant time of use. Your Future TV Is Not About Tele-Vision. The word is a combination of tele--from the Greek meaning "far"--and vision, from the Latin word visionem, which means "the act of seeing. " Call it remote viewing, if you're a sci-fi type, but "television" has until very recently meant one thing only: It's a one-way window into another world. That's very swiftly about to change. GetGlue, which styles itself as a "growing social network for entertainment, where you check-in and share shows, movies, music with your friends" has just revealed a new iPad app.

The app, so the company says "features a reimagined guide for shows, movies, and sports" and comes with new bonus powers to "bring you the best related content about your favorite shows to the second screen. " An Interactive History Lesson On The Cuban Missile Crisis And A Sobering What-If. A history lesson becomes immersive and exploratory via an interactive multimedia documentary on the Cuban missile crisis that went live this morning at CloudsOverCuba.com, 50 years to the date President John F. Kennedy learned through reconnaissance photos that the Soviets were building missile bases in Cuba. The interactive film was conceptualized for the John F.