AAP Guideline. CSEP Guideline Children. CSEP Guideline Early Years. Coalition to Fight Tech Addiction. Content Matters. Device Use at Bedtime. Bedtime use of cellphones or tablets by children — even just having access to them — is consistently linked to excessive daytime sleepiness and poor sleep, researchers say. 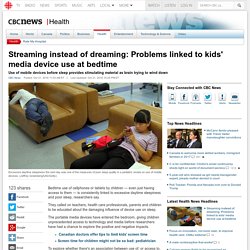 They called on teachers, health care professionals, parents and children to be educated about the damaging influence of device use on sleep. The portable media devices have entered the bedroom, giving children unprecedented access to technology and media before researchers have had a chance to explore the positive and negative impacts. To explore whether there's an association between use of, or access to, media devices and sleep quantity and quality, researchers reviewed 20 sleep studies involving 125,198 children aged six to 19.

The way device use leads to poor sleep is thought to be light emission. 'Teachers will be the first to recognize the signs of day-time sleepiness. "We are presenting results that highlight that it looks likely there are also other causes," Carter said in an email. Stop 90 minutes before bed. Effects of TV on the Brain. Watching TV is something which virtually everyone does, but did you know that TV can actually be harmful for you? 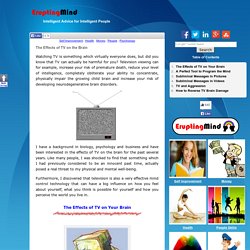 Television viewing can for example, increase your risk of premature death, reduce your level of intelligence, completely obliterate your ability to concentrate, physically impair the growing child brain and increase your risk of developing neurodegenerative brain disorders. I have a background in biology, psychology and business and have been interested in the effects of TV on the brain for the past several years. Like many people, I was shocked to find that something which I had previously considered to be an innocent past time, actually posed a real threat to my physical and mental well-being. Furthermore, I discovered that television is also a very effective mind control technology that can have a big influence on how you feel about yourself, what you think is possible for yourself and how you perceive the world you live in.

The Effects of TV on Your Brain Yummy! 3) Addiction. Playtime and Screen Time. Pokémon Go was the viral sensation of the summer, engaging kids and adults alike in the pursuit of rare digital creatures across neighbourhoods and parks. 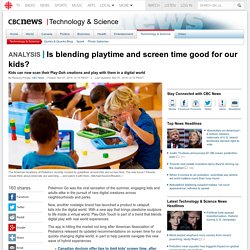 Now, another nostalgic brand has launched a product to catapult kids into the digital world. With a new app that brings plasticine sculpture to life inside a virtual world, Play-Doh Touch is part of a trend that blends digital play with real world experiences. The app is hitting the market not long after American Association of Pediatrics released its updated recommendations on screen time for our quickly changing digital world, in part to help parents navigate this new wave of hybrid experiences. "Children learn best by doing and, traditionally, screen time has been largely passive and inactive," says Paul Darvasi, a media studies expert who uses game-based learning strategies in his teaching at Royal St. George's College in Toronto.

Finding balance in a digital world "As parents, we have to be the role model," she says. Preschooler and Screen Time. Screen Addiction. Susan* bought her 6-year-old son John an iPad when he was in first grade. “I thought, ‘Why not let him get a jump on things?’ ” she told me during a therapy session. John’s school had begun using the devices with younger and younger grades — and his technology teacher had raved about their educational benefits — so Susan wanted to do what was best for her sandy-haired boy who loved reading and playing baseball.

She started letting John play different educational games on his iPad. Eventually, he discovered Minecraft, which the technology teacher assured her was “just like electronic Lego.” Enlarge Image At first, Susan was quite pleased. Still, Susan couldn’t deny she was seeing changes in John. Although that concerned her, she thought her son might just be exhibiting an active imagination. Then, one night, she realized that something was seriously wrong. “I walked into his room to check on him. Screen Time and Storytelling. Screen Time Now Sets Kids Back Later. It doesn’t matter whether kids spend time in front of a TV or in front of a computer. 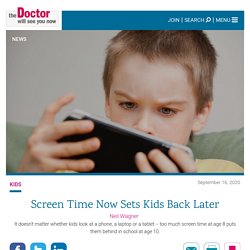 Too much screen time can put children behind in school. Either way, an Australian study found that more screen time was associated with poorer academic performance. Both types of screen time set the children behind by about four months, according to their test scores. Kids who used a computer for more than an hour a day in grade three had lower math scores when tested in grade five. Screen Time Primer. Tech Insiders Unite Against Digital Addictions. The Influence of a Digital Math Game on Student Number Sense. Abstract This study sought to determine if playing a digital math game could increase student number sense (mathematical proficiency in numeracy). 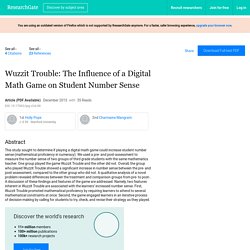 We used a pre- and post-assessment to measure the number sense of two groups of third grade students with the same mathematics teacher. One group played the game Wuzzit Trouble and the other did not. Overall, the group who played Wuzzit Trouble showed a significant increase in number sense between the pre- and post-assessment, compared to the other group who did not. A qualitative analysis of a novel problem revealed differences between the treatment and comparison groups from pre- to post-. Too much screen time can delay important developmental milestones for children, study finds. Too much screen time can negatively affect a young child’s development, according to a new study by researchers at the University of Calgary. 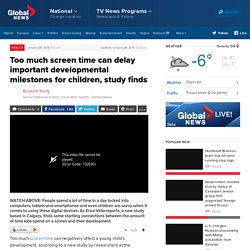 The study, published Monday in the journal JAMA Pediatrics, followed a group of 2,441 children between 2011 and 2016, measuring their screen time as well as their progress in meeting various developmental milestones. The researchers found that higher levels of screen time at two and three years old was associated with poorer performance on a developmental screening test by age five. This means that children weren’t meeting benchmarks in communication, social skills, problem-solving and motor skills, said Sheri Madigan, a lead researcher on the study and assistant professor in psychology at the University of Calgary.