Immigration to the US

Biden plans to reverse Trump immigration restrictions, but risks of new border crisis looms. Trump Cabinet officials voted in 2018 White House meeting to separate migrant children, say officials. WASHINGTON — In early May 2018, after weeks of phone calls and private meetings, 11 of the president's most senior advisers were called to the White House Situation Room, where they were asked, by a show-of-hands vote, to decide the fate of thousands of migrant parents and their children, according to two officials who were there. 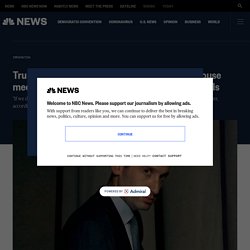 President Donald Trump's senior adviser Stephen Miller led the meeting, and, according to the two officials, he was angry at what he saw as defiance by Homeland Security Secretary Kirstjen Nielsen. It had been nearly a month since Jeff Sessions, then the attorney general, had launched the Trump administration's "zero tolerance" policy, announcing that every immigrant who crossed the U.S. border illegally would be prosecuted, including parents with small children.

WASHINGTON — President Trump’s immigration policies — from travel bans and visa restrictions to refugee caps and asylum changes — have begun to deliver on a longstanding goal: Legal immigration has fallen more than 11 percent and a steeper drop is looming. 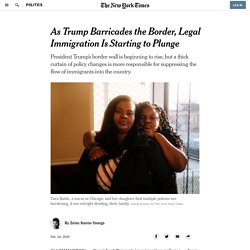 While Mr. Trump highlights the construction of a border wall to stress his war on illegal immigration, it is through policy changes, not physical barriers, that his administration has been able to diminish the flow of migrants into the United States. Two more measures took effect Friday and Monday, an expansion of his travel ban and strict wealth tests on green card applicants. “He’s really ticking off all the boxes. It’s kind of amazing,” said Sarah Pierce, a policy analyst with the Migration Policy Institute, a nonpartisan research group.

And immigration experts say new policies will accelerate the trend. Donald Graham - What abolishing DACA would mean for thousands of admirable dreamers. The Supreme Court May Let Trump End DACA. Here’s What the Public Thinks About It. Welcome to Poll Watch, our weekly look at polling data and survey research on the candidates, voters and issues that will shape the 2020 election. 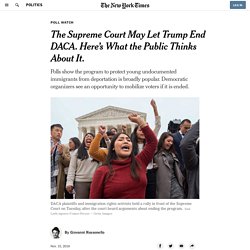 They Achieved the American Dream. Will the Supreme Court Let Them Keep It? US immigration. The Racism at the Heart of Trump’s ‘Travel Ban’ It’s happening a little bit out of public consciousness — swamped by impeachment, the coronavirus and the Democratic presidential race — but on Friday President Trump announced further restrictions on immigration and foreign entry to the United States. 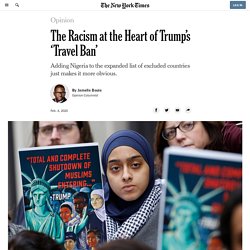 Citing security concerns, the administration has slammed the door on immigrants from the African nations of Sudan, Tanzania and Eritrea, as well as Myanmar in Southeast Asia and Kyrgyzstan in Central Asia. These countries, which have large Muslim populations, join seven others on the president’s ever-developing travel ban. There’s one other country on the expanded list — Nigeria. Home to more than 200 million of Africa’s 1.2 billion people, Nigeria has the largest economy on the continent and has worked with the American military on joint operations. But there’s little to no evidence that this group is a threat to Americans, nor is there any history of Nigerian terrorism on American soil. Bigoted and Feckless, the Travel Ban Is Pure Trump. On Tuesday morning the five conservative justices of the Supreme Court — including the one who got the job only because Senate Republicans stole a seat and held it open for him — voted to uphold President Trump’s travel ban, which indefinitely bars most people from five majority-Muslim countries, and certain citizens from two other countries, from entering the United States. 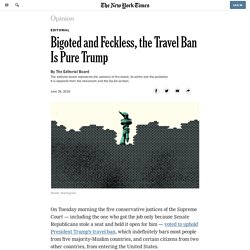 The conservatives said the ban, Mr. Trump’s third version after the first two were struck down by lower federal courts, was a lawful exercise of presidential authority. They reached this conclusion despite Mr. Trump Posts Another ‘Keep Out’ Sign for Immigrants. On Friday, with Americans focused on President Trump’s impeachment trial, the coronavirus and the upcoming Iowa caucuses, the Trump administration announced it was adding six more countries to the list of those whose citizens face travel restrictions to the United States. 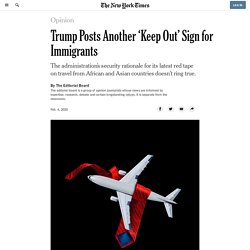 The given reason was that those nations were not sufficiently screening people who sought to come to America. The six countries affected when the travel ban takes effect on Feb. 22 are Sudan, Tanzania, Eritrea, Myanmar, Kyrgyzstan and Nigeria. All have sizable, if not majority, Muslim populations — in Myanmar’s case, Muslims are a minority that is severely repressed. I’m a Liberal Who Thinks Immigration Must Be Restricted. In 2004, as the national immigration reporter for the San Diego-based Copley newspaper chain, I returned to Arizona to report on Proposition 200, a statewide ballot initiative to deny public services to unauthorized immigrants. 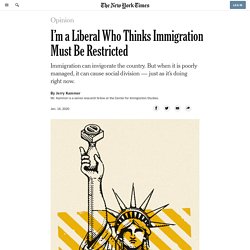 Public anxiety had grown in tandem with the state’s illegal immigrant population, which had jumped to 480,000 in 2005 from an estimated 88,000 in 1990. In Phoenix I spoke with Donna Neill, a volunteer organizer in a working-class neighborhood and the driving force in the construction of a park that was used primarily by immigrant children. Nevertheless, she supported Proposition 200. She pointed to crowded classrooms, apartments where two or three families crammed into a space meant for one and home additions in violation of housing codes that went unenforced. “We’re losing the simple things that make a society a society, but no one wants to step forward because they’re afraid of crossing some line and being called a racist,” said Ms. 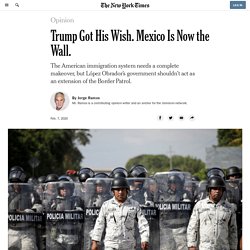 President Trump got his wish. The heart-wrenching images documenting a recent confrontation in the state of Chiapas, near the border with Guatemala, are evidence of this. Dozens of Mexican National Guard troops equipped with helmets, batons and transparent shields coalesced on the highway connecting the Mexican cities of Ciudad Hidalgo and Tapachula to stop a caravan of migrants heading to the United States from Central America. Mexico has effectively turned into an extension of Mr. Trump’s immigration police beyond American territory.