Revealed: Trump-linked consultant tied to Facebook pages warning election will cause civil war. A militia-promoting father and son duo of fake news publishers and a Trump-connected social media consultant are linked to pages which promote the idea of an American civil war with material presented in a way that appears to be an effort to sidestep Facebook’s fact-checking system. 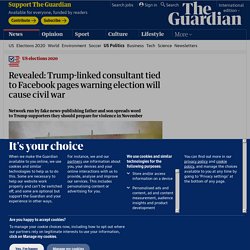 Comments on their Facebook pages and other materials obtained by the Guardian show that some rank and file Donald Trump supporters are enthusiastically receiving the message that they should prepare for violence against their perceived political enemies in November. The network is comprised of websites owned and operated by Dino Porrazzo Sr and Dino Porrazzo Jr, whose company, AFF Media, is headquartered in Pinon Hills in California. The pair have been running rightwing websites since at latest 2013, according to DNS website records.

The page makes free use of political memes, but many posts link to a small cluster of rightwing websites designed to appear like news outlets. QAnon conspiracists believe in a vast pedophile ring. The truth is sadder. In recent weeks the groups have moved offline and into the real world, using their Facebook pages to organize in-person rallies outside tourist attractions like the Big Red Wagon in Spokane, Washington, and the state capitol building in Salem, Oregon. 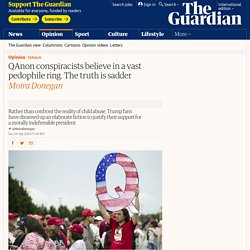 The believers hold signs that say things like “#SavetheChildren” and “Stop Child Trafficking.” They’re often accompanied by their children, wearing T-shirts and onesies that read “I am not for sale.” At first glance they seem innocuous, like petitioners for a non-profit or an inoffensive social cause. But there are giveaways. Some of the signs bear images of pizza slices, a reference to the Pizzagate conspiracy theory that held that Hillary Clinton was operating a pedophilia ring out of a gimmicky Washington DC pizza parlor called Comet Ping Pong. 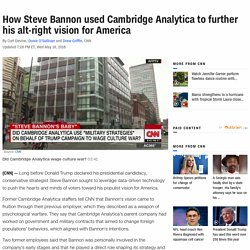 They say that Cambridge Analytica's parent company had worked on government and military contracts that aimed to change foreign populations' behaviors, which aligned with Bannon's intentions. Two former employees said that Bannon was personally involved in the company's early stages and that he played a direct role shaping its strategy and goals. "This was Steve Bannon's baby," said former contractor Christopher Wylie, who described Cambridge Analytica as "Bannon's arsenal of weaponry to wage a culture war on America using military strategies. " OAN: Last Week Tonight with John Oliver (HBO) The Man Behind Trump’s Facebook Juggernaut. The company moved to a tonier office across town and took on more lucrative clients—the University of Texas, ExxonMobil, a few real-estate agencies in New York. 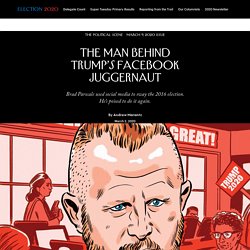 The Newseum belonged to an earlier age of media culture. It couldn't survive the change. Media boost security as Trump ramps up 'enemy' rhetoric. Notebooks, mics, cameras, hairspray — those are all things TV reporters are used to having with them at political rallies. 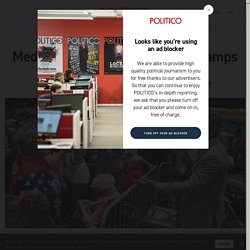 Now, in the age of President Donald Trump, they’ve added another: security guards. The networks are employing them, according to reporters, at Trump’s high-octane political rallies, where the media often serves as the No. 1 rhetorical punching bag. Story Continued Below Last weekend, NBC News White House correspondent Geoff Bennett posted a picture on Instagram of himself with a member of the NBC security detail at Trump’s Ohio rally, commenting, “We need security guards when covering rallies hosted by the President of the United States. ‘Enemy of the people’: Trump’s war on the media is a page from Nixon’s playbook. War reporting has never been more dangerous, as correspondents are increasingly treated not as neutral observers but legitimate targets. 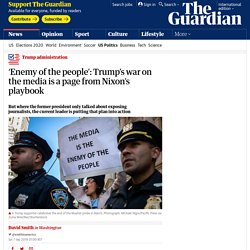 Now there are signs that Donald Trump and his Republican supporters are taking a similar attitude to political journalists, casting them as enemy combatants and fair game for character assassination. The US president’s allies are reportedly carrying out “oppo research” – usually reserved for rival politicians – to compile dossiers on individual reporters in an attempt to discredit them. Attorney Floyd Abrams Calls Tump Greatest Media Threat. 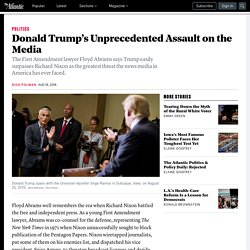 In Abrams’s words, “If news is ‘fake’ not because it is untrue but because it is insufficiently supportive of him, the very relevance of truth-telling becomes at risk … Cynical or repeatedly false criticism [of the free press] ultimately leads to an ill-informed and ultimately ill-led people. And when the criticism is often, very often, rooted in a sort of ignorant rage, it too easily can lead to an ignorant public led by a repressive regime.”

And, on Thursday, it was precisely those burgeoning concerns that prompted more than 300 newspapers and media outlets to stand in solidarity—an unprecedented moment because notoriously independent journalists rarely collaborate on anything. It’s debatable that these editorials will sway many minds and reduce the ambient toxicity. The Free Press Is Under Fire. The effects of the sustained attacks on the press have become cumulative, intimidating reporters—and, more importantly, editors, publishers, and owners—in newsrooms across the country. 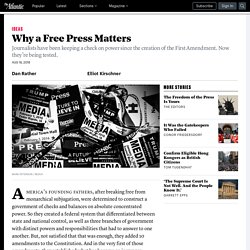 Despite the negative perception in some circles, almost every American journalist I have ever met is at the core patriotic. We wish our fellow Americans well. We hope our government leads with moral clarity and wisdom. And we want it to succeed in making us a more peaceful, prosperous, and just country. Nevertheless, our constitutional role often puts us in an adversarial position to our government. On the morning of September 11, 2001, as I rushed to the CBS News broadcast studio, I could see the columns of smoke rising amid a brilliant blue sky. The focus shifted almost immediately to Afghanistan, where the masterminds of the mass murder of 9/11 had found sanctuary.

Then, almost immediately, we started hearing from high-level officials in the George W. The disinformation age: a revolution in propaganda. Father came out of the sea and was arrested on the beach: two men in suits standing over his clothes as he returned from his swim. 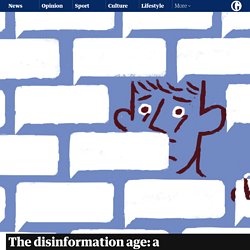