The USA in the 60's: activism and counterculture

Psychedelic 60s: Table of Contents. THE SUMMER OF 1967, with its "Love-Ins," "Be-ins," and "Flower Power," came to be known as "The Summer of Love," and was one of the seminal moments of our generation. 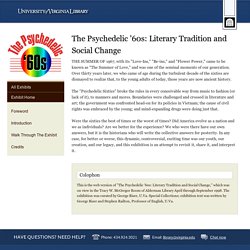 Over thirty years later, we who came of age during the turbulent decade of the sixties are dismayed to realize that, to the young adults of today, those years are now ancient history. The "Psychedelic Sixties" broke the rules in every conceivable way from music to fashion (or lack of it), to manners and mores. Boundaries were challenged and crossed in literature and art; the government was confronted head-on for its policies in Vietnam; the cause of civil rights was embraced by the young; and mind-expanding drugs were doing just that. Civil Rights Movement. In the early 1960s, the fundamental prize sought by the civil rights movement was something that African Americans had never known: full legal equality. 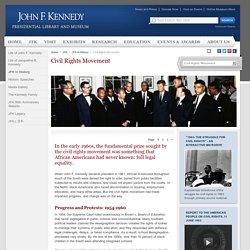 When John F. Kennedy became president in 1961, African Americans throughout much of the South were denied the right to vote, barred from public facilities, subjected to insults and violence, and could not expect justice from the courts. The Sixties . Pop Culture. Pop culture is that loose blend of books, music, fashion and other daily ephemera that contributes to the identity of a society at a particular point in time. 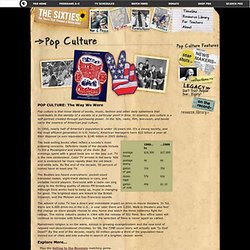 In essence, pop culture is a self-portrait created through purchasing power. In the '60s, radio, film, television, and books carry the essence of American pop culture. In 1960, nearly half of America's population is under 18 years old. It's a young society, and the most affluent generation in U.S. history. American teenagers have $22 billion a year at their disposal (a sum equivalent to $140 billion in 2005 dollars). The best-selling books often reflect a society's most pressing concerns. The Beatles are heard everywhere: pocket-sized transistor radios, eight-track stereos in cars, and portable record players. The advent of color TV has a direct and immediate impact on drive-in movie theaters. Protests in the 1960s. Protests in the 1960s These movements include the civil rights movement, the student movement, the anti-Vietnam War movement, the women’s movement, the gay rights movement, and the environmental movement. 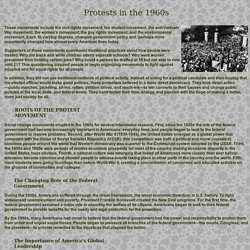 Each, to varying degrees, changed government policy and, perhaps more importantly, changed how almost every American lives today. Supporters of these movements questioned traditional practices about how people were treated. Why did black and white children attend separate schools? Why were women prevented from holding certain jobs? In addition, they did not use traditional methods of political activity. Social change movements erupted in the 1960s for several interrelated reasons. Student Movement of the 1960s. During the 1960s Georgia experienced an increase in student activism on its college campuses and in its cities. 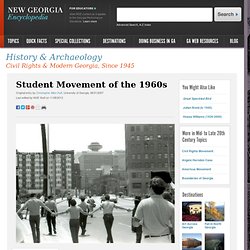 Opposed to U.S. political leadership and dissatisfied with American culture, student activists held demonstrations across the state and experimented with lifestyle changes in the hope of effecting fundamental change in American life. The student movement, also called the New Left because it represented the latest manifestation of left-leaning political activism, gained converts on campuses across the nation throughout the decade. In Georgia several schools maintained chapters of national and regional student organizations, such as Students for a Democratic Society and the Southern Student Organizing Committee (SSOC). Georgia student leaders often looked to the national New Left for guidance and inspiration. Civil Rights Movement The civil rights movement motivated many of Georgia's New Left leaders to become involved in political activism. Activism at UGA Antiwar Protests. The Anti-War Movement in the United States. U.S. History II: The Counterculture of the 1960s.

The Sixties. American Cultural History - 1960 - 1969. The purpose of this web and library guide is to help the user gain a broad understanding and appreciation for the culture and history of the 1960s. 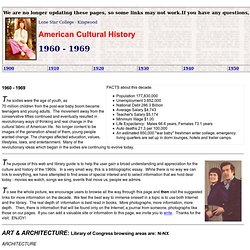 In a very small way, this is a bibliographic essay. While there is no way we can link to everything, we have attempted to find areas of special interest and to select information that we hold dear today - movies we watch, songs we sing, events that move us, people we admire. To see the whole picture, we encourage users to browse all the way through this page and then visit the suggested links for more information on the decade. We feel the best way to immerse oneself in a topic is to use both Internet and the library. The real depth of information is best read in books. Architecture in the sixties was undergoing a refinement of Modernism and a move to an even more streamlined contemporary look. BOOKS: Library of Congress browsing areas include: PS - American Literature; Z - Books and Libraries. United States History - Sixties History. USA sixties.