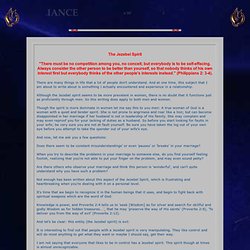 He/She works undercover and does not want to be exposed. Once acceptance is established, he/she begins to use truth, seasoned with well placed lies, to clandestinely spin a web of deception and entanglement. Clever methods induce fear in others. He/She then draws power and authority from their fear. Such individuals have mastered a sophisticated ability to manipulate and control without physical force. The Jezebel spirit is sociopathic. . * Refuses to admit guilt or wrong. . * Takes credit for everything. . * Uses people to accomplish its agenda. . * Lies. . * Ignores people that could disagree with them. 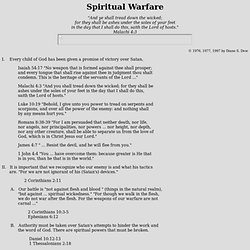 " Malachi 4:3 ©1976, 1977, 1997 by Diane S. Dew I. Isaiah 54:17 "No weapon that is formed against thee shall prosper; and every tongue that shall rise against thee in judgment thou shalt condemn. Malachi 4:3 "And you shall tread down the wicked; for they shall be ashes under the soles of your feet in the day that I shall do this, saith the Lord of hosts. " Luke 10:19 "Behold, I give unto you power to tread on serpents and scorpions, and over all the power of the enemy: and nothing shall by any means hurt you. " Romans 8:38-39 "For I am persuaded that neither death, nor life, nor angels, nor principalities, nor powers ... nor height, nor depth, nor any other creature, shall be able to separate us from the love of God, which is in Christ Jesus our Lord. 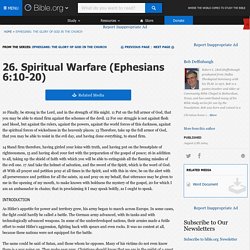 Introduction As Hitler’s appetite for power and territory grew, his army began to march across Europe. In some cases, the fight could hardly be called a battle. The German army advanced, with its tanks and with technologically advanced weapons. In some of the underdeveloped nations, their armies made a futile effort to resist Hitler’s aggression, fighting back with spears and even rocks. The same could be said of Satan, and those whom he opposes. The Spiritual War in the Old Testament.