Netflix Revenue and Usage Statistics (2018) - Business of Apps. Netflix was conceived in 1997 by Reed Hastings (the current CEO) and Marc Randolph. 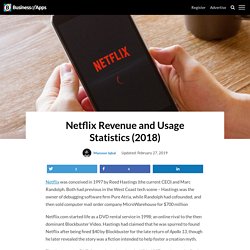 Both had previous in the West Coast tech scene – Hastings was the owner of debugging software firm Pure Atria, while Randolph had cofounded, and then sold computer mail order company MicroWarehouse for $700 million Netflix.com started life as a DVD rental service in 1998; an online rival to the then dominant Blockbuster Video. Hastings had claimed that he was spurred to found Netflix after being fined $40 by Blockbuster for the late return of Apollo 13, though he later revealed the story was a fiction intended to help foster a creation myth. The then nascent DVD format, introduced to the US in 1997, was key to the firm’s business model, providing a format lightweight and compact enough to work in a mail order context. Around the turn of the century, Netflix introduced the subscription model, moving away from single DVD rental. ‘Netflix Queue’ — Story. Queue is the new journal from the global streaming service Netflix, launching in August 2019. 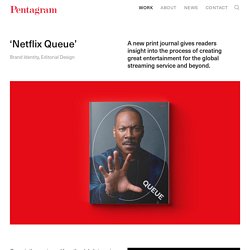 Presented in an oversized format, the publication offers a place for the diverse Netflix family to share their stories and give readers insight into the process of creating great entertainment for the platform and beyond. How These 5 Brands Are Acing Storytelling on Social Media. Let’s begin with a reality check: A whopping 74% of brands have no meaning in consumers’ lives. 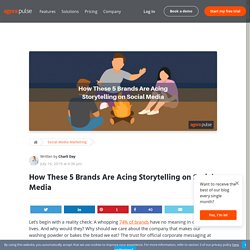 Storytelling in Marketing: The Importance of Brand Narrative. The use of narrative and storytelling has been proven to help consumers make emotional and personal connections with brands. 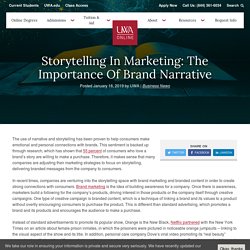 This sentiment is backed up through research, which has shown that 55 percent of consumers who love a brand’s story are willing to make a purchase. Therefore, it makes sense that many companies are adjusting their marketing strategies to focus on storytelling, delivering branded messages from the company to consumers. In recent times, companies are venturing into the storytelling space with brand marketing and branded content in order to create strong connections with consumers. Brand marketing is the idea of building awareness for a company. Netflix: An Indepth Look at Their Killer Brand Content Strategy.

Over the years, slowly but surely, Netflix has morphed into an original content machine. 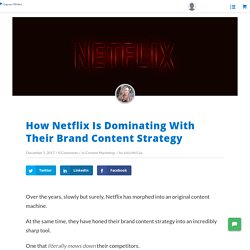 At the same time, they have honed their brand content strategy into an incredibly sharp tool. One that literally mows down their competitors. Look at their brand growth numbers: Netflix Has Changed Storytelling. What Brands Can Learn From It. Disney+ streaming launch tangled in sign-on errors and frozen screens. Disney+ surpasses 10 million subscribers on first day. Disney+ surpassed 10 million subscribers in its first day, the company announced today. 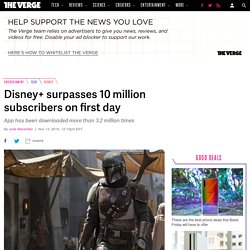 Disney’s announcement comes after Apptopia reported that the Disney+ app has been downloaded more than 3.2 million times. That’s despite tech problems that affected the service throughout the day. The Mandalorian, the live-action Star Wars show easily considered the crown jewel of Disney’s streaming service, saw north of 2 million streams over the first day, according to people familiar with the matter. Netflix tests human-driven curation with launch of ‘Collections’

Netflix is testing a new way to help users find TV shows and movies they’ll want to watch with the launch of a “Collections” feature, currently in testing on iOS devices. 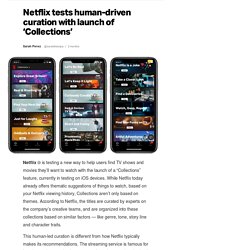 While Netflix today already offers thematic suggestions of things to watch, based on your Netflix viewing history, Collections aren’t only based on themes. According to Netflix, the titles are curated by experts on the company’s creative teams, and are organized into these collections based on similar factors — like genre, tone, story line and character traits. This human-led curation is different from how Netflix typically makes its recommendations. Video On Demand Market Size, Regional Analysis and Growth Rate 2025. The global video on demand market size, valued at US$ 43.9 Bn in 2017, is projected to reach US$ 87.1 Bn by the end of 2025, exhibiting a CAGR of 9%. 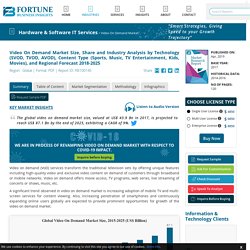 We are in process of revamping Video On Demand Market with respect to COVID-19 Impact. Inquire before buying Video on demand (VoD) services transform the traditional television sets by offering unique features including high-quality video and exclusive video content on demand of customers through broadband or mobile networks. Video on demand offers movie access, TV programs, web series, live streaming of concerts or shows, music, etc. A significant trend observed in video on demand market is increasing adoption of mobile TV and multi-screen services for content viewing. Request a sample to learn more about this report. The primary factors for the growth of this market would be the growing adoption of mobile devices for watching online videos and increasing internet-based consumer spending. Market Segmentation Regional Analysis Key Market Drivers.

- The Washington Post. Streaming Price Wars Set to Heat Up Between Apple TV+, Disney, More. With its $800 iPhones and $1,400 Hermès smart watches, Apple’s not exactly in the business of bargain-bin pricing. 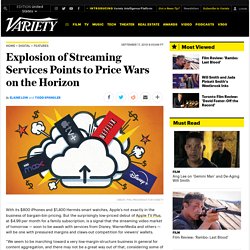 But the surprisingly low-priced debut of Apple TV Plus, at $4.99 per month for a family subscription, is a signal that the streaming video market of tomorrow — soon to be awash with services from Disney, WarnerMedia and others — will be one with pressured margins and claws-out competition for viewers’ wallets.