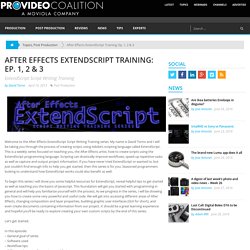 My name is David Torno and I will be taking you through the process of creating scripts using Adobe’s scripting language called ExtendScript. This is a weekly series focused on teaching you, the After Effects artist, how to create scripts using the ExtendScript programming language. Scripting can drastically improve workflows, speed up repetitive tasks as well as capture and output project information. If you have never tried ExtendScript or wanted to, but just couldn’t find enough info to help you get started, then this series is for you. Seasoned programmers looking to understand how ExtendScript works could also benefit as well. To begin this series I will show you some helpful resources for ExtendScript, reveal helpful tips to get started as well as teaching you the basics of javascript.

Let’s get started. In this episode: – Comments – alert() – Arithmetic Operators – Comparison Operators – Variable – Array() After Effects region of interest. ScriptUI for dummies. ScriptUI is a module in the Adobe CS/CC family (from CS2 in Photoshop, CS3 for InDesign) with which script dialogs can be added to scripts written in JavaScript. 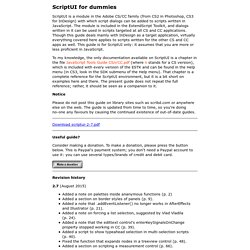 The module is included in the ExtendScript Toolkit, and dialogs written in it can be used in scripts targeted at all CS and CC applications. Though this guide deals mainly with InDesign as a target application, virtually everything covered here applies to scripts written for the other CS and CC apps as well. This guide is for ScriptUI only: it assumes that you are more or less proficient in JavaScript. To my knowledge, the only documentation available on ScriptUI is a chapter in the file JavaScript Tools Guide CSn/CC.pdf (where n stands for a CS version), which is included with every version of the ESTK and can be found in the Help menu (in CS3, look in the SDK submenu of the Help menu).

That chapter is a complete reference for the ScriptUI environment, but it is a bit short on examples here and there. Notice. Mamoworld. Le freelance saucisse. Rendertom. After Effects Plug-ins, Presets and Project Templates. Introduction To The Basics Of After Effects Scripting - Tuts+ 3D & Motion Graphics Tutorial. To go along with our recent tutorial about script development workflow, we will go over the basic concepts and good practices necessary to start writing After Effects scripts. 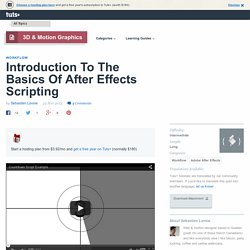 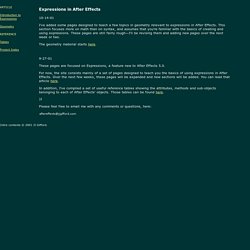 This section focuses more on math than on syntax, and assumes that you're familiar with the basics of creating and using expressions. These pages are still fairly rough—I'll be revising them and adding new pages over the next week or two. The geometry material starts here. These pages are focused on Expressions, a feature new to After Effects 5.0. For now, the site consists mainly of a set of pages designed to teach you the basics of using expressions in After Effects.

In addition, I've compiled a set of useful reference tables showing the attributes, methods and sub-objects belonging to each of After Effects' objects. Please feel free to email me with any comments or questions, here: CEP 5 Super mega guide: Extending Adobe apps with HTML5+Node.js. It’s not that widely known yet, but ever since the CC 2014 updates in June of this year, eight different Adobe tools now support a common extension framework based purely on web technologies. 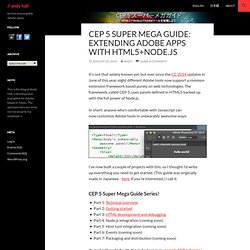 The framework, called CEP 5, uses panels defined in HTML5 backed up with the full power of Node.js. In short: anyone who’s comfortable with Javascript can now customize Adobe tools in unbearably awesome ways: I’ve now built a couple of projects with this, so I thought I’d write up everything you need to get started. (This guide was originally made in Japanese - here, if you’re interested.) I call it: CEP 5 Super Mega Guide Series! Part 1: Technical overviewPart 2: Getting startedPart 3: HTML development and debuggingPart 4: Node.js integration (coming soon)Part 5: Host tool integration (coming soon)Part 6: Events (coming soon)Part 7: Packaging and distribution (coming soon) Scripting & Expressions.