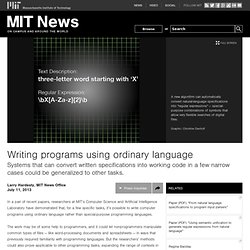 The work may be of some help to programmers, and it could let nonprogrammers manipulate common types of files — like word-processing documents and spreadsheets — in ways that previously required familiarity with programming languages. But the researchers’ methods could also prove applicable to other programming tasks, expanding the range of contexts in which programmers can specify functions using ordinary language. “I don’t think that we will be able to do this for everything in programming, but there are areas where there are a lot of examples of how humans have done translation,” says Regina Barzilay, an associate professor of computer science and electrical engineering and a co-author on both papers. Opening gambit. Rubular: a Ruby regular expression editor and tester. RegExr. Re – Regular Expressions. Regular expressions are text matching patterns described with a formal syntax. 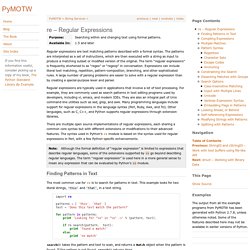 The patterns are interpreted as a set of instructions, which are then executed with a string as input to produce a matching subset or modified version of the original. The term “regular expressions” is frequently shortened to as “regex” or “regexp” in conversation. Expressions can include literal text matching, repetition, pattern-composition, branching, and other sophisticated rules. A large number of parsing problems are easier to solve with a regular expression than by creating a special-purpose lexer and parser. 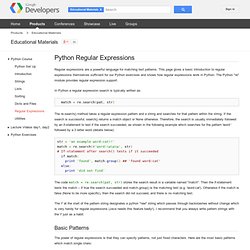 ' The code match = re.search(pat, str) stores the search result in a variable named "match". The 'r' at the start of the pattern string designates a python "raw" string which passes through backslashes without change which is very handy for regular expressions (Java needs this feature badly!).

Basic Patterns The power of regular expressions is that they can specify patterns, not just fixed characters. A, X, 9, < -- ordinary characters just match themselves exactly. Findall. Regular Expressions (RegEx) - Quick Reference. What every programmer absolutely, positively needs to know about encodings and character sets to work with text — kunststube.net. If you are dealing with text in a computer, you need to know about encodings. 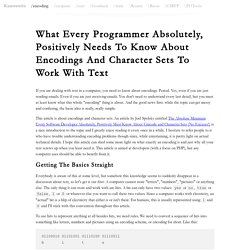 Period. Yes, even if you are just sending emails. Even if you are just receiving emails. You don't need to understand every last detail, but you must at least know what this whole "encoding" thing is about. And the good news first: while the topic can get messy and confusing, the basic idea is really, really simple. This article is about encodings and character sets.