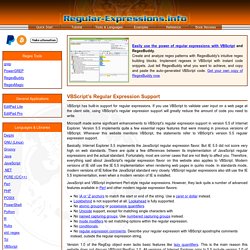 If you use VBScript to validate user input on a web page at the client side, using VBScript's regular expression support will greatly reduce the amount of code you need to write. Microsoft made some significant enhancements to VBScript's regular expression support in version 5.5 of Internet Explorer. Version 5.5 implements quite a few essential regex features that were missing in previous versions of VBScript.

Whenever this website mentions VBScript, the statements refer to VBScript's version 5.5 regular expression support. Basically, Internet Explorer 5.5 implements the JavaScript regular expression flavor. JavaScript and VBScript implement Perl-style regular expressions. No \A or \Z anchors to match the start or end of the string. Version 1.0 of the RegExp object even lacks basic features like lazy quantifiers. How to Use the VBScript RegExp Object The Execute method also takes one string parameter. Make a Donation. Using Regex Functions in Excel. This is a public service message. 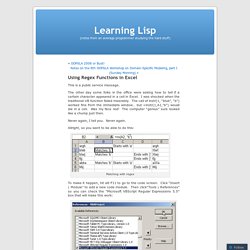 The other day some folks in the office were asking how to tell if a certain character appeared in a cell in Excel. I was shocked when the traditional VB function failed miserably. The call of instr(1, “blub”, “b”) worked fine from the immediate window… but =instr(1,A1,”b”) would die in a cell. Was my face red! The computer “genius” sure looked like a chump just then. Never again, I tell you. Allright, so you want to be able to do this: Matching with regex To make it happen, hit alt-F11 to go to the code screen. Set those references! Wildcards in 'Replace With' Text. Please Note: This article is written for users of the following Microsoft Excel versions: 97, 2000, 2002, and 2003. 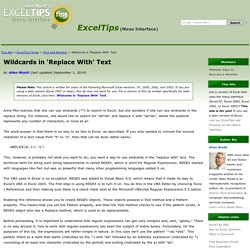 For instance, she would like to search for "ab*de" and replace it with "aa*de", where the asterisk represents any number of characters, or none at all. The short answer is that there is no way to do this in Excel, as described. =REPLACE(A1,2,1,"a") This, however, is probably not what you want to do; you want a way to use wildcards in the "replace with" text. VBA RegEx: How to Evaluate and Use "Regular Expressions" VBA or Visual Basic for Applications is a powerful programming tool in Microsoft Excel. 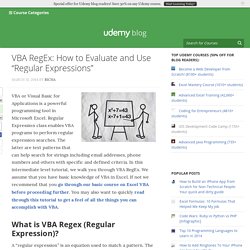 Regular Expression class enables VBA programs to perform regular expression searches. The latter are text patterns that can help search for strings including email addresses, phone numbers and others with specific and defined criteria. In this intermediate level tutorial, we walk you through VBA RegEx. We assume that you have basic knowledge of VBA in Excel. If not we recommend that you go through our basic course on Excel VBA before proceeding further. What is VBA Regex (Regular Expression)? A “regular expression” is an equation used to match a pattern. Quantifiers Quantifiers are needed to match several characters. Special Characters Regex covers a lot of special characters. Character Classes Characters can be grouped by putting them inside square brackets. Are regex cases case sensitive? The Limitations of Regular Expression. Find and replace text by using regular expressions (Advanced) 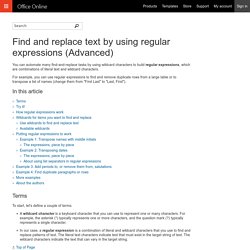 If you're unfamiliar with character codes, see the Word Help topic Find and replace text and other data in your Word 2010 files. Keep these facts in mind as you proceed: Whenever you use this expression on names that reside in a table, you must first convert that table to text. To prepare sample data If you haven't already done so, start Word and create a new, blank document. To transpose names with initials On the Home tab, in the Editing group, click Replace to open the Find and Replace dialog box. To convert the changed text back to a table Select the list of transposed names. The expressions, piece by piece This part of the expression matches the last names: Example 2: Transposing dates Windows 7.