FaceUp Gaming. ZEN Entertainment Network. Poker Industry Beginning to Embrace Free Poker Sites? Maybe people are just jonesing to click-and-raise or maybe various industry stalwarts are starting to see the new poker era that dawned upon us on April 15th isn’t all about tearing down Full Tilt and PokerStars [update: and now Doyle's Room] in their battle with the DOJ … it’s about building new structures that will become the basis for the game (and industry surrounding it) in the 21st century. 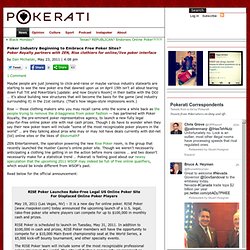 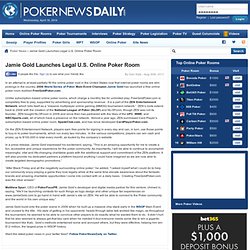 Unlike subscription-based online poker rooms, which charge a monthly fee for unlimited play, FreeGoldPoker.com is completely free to play, supported by advertising and sponsorship revenue. It is a part of the ZEN Entertainment Network, which bills itself as a “massive multiplayer online gaming (MMOG) tournament network.”

ZEN’s roots extend back to 2006 with the creation of the National League of Poker (NLOP) and NLOP.com, though ZEN was not its founder. ZEN bought NLOP.com in 2008 and since then has partnered with the likes of the UFC, WWE, and NBCSports.com, all of which have a presence on the network. Freegoldpoker - freegoldpoker. CardPlayerPoker. South Point Poker. South Point Casino in Las Vegas to Offer Free Online Poker Through Zen Gaming Network. Play Online Poker Free: South Point Poker Site Flourishing. ShareThis After just over a month of offering folks the opportunity to play online poker for free with a licensed and regulated Las Vegas casino, South Point Poker has seen its website generating plenty of momentum. 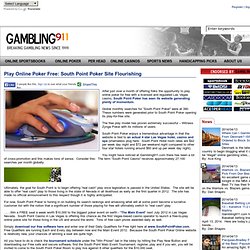 Global monthly searches for “South Point Poker” were at 390. These numbers were generated prior to South Point Poker opening its play-for-free site. The free play model has proven extremely successful – Witness Zynga Poker with its millions of users. South Point Poker enjoys a tremendous advantage in that the website is tied to an actual 4 star Las Vegas hotel, casino and spa (shameless plug here: South Point Hotel room rates are $42 per week day night and $72 per weekend night compared to other four star hotels running around $60 and up per week day night).

You might have noticed at Gambling911.com there has been a lot of cross-promotion and this makes tons of sense. . - Patrick Flanagan, Gambling911.com. South Point 'looking ahead' with new poker website - Tuesday, Oct. 18, 2011. The South Point poker room is shown in this 2010 file photo. 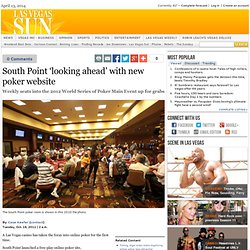 By Case Keefer (contact) Tuesday, Oct. 18, 2011 | 2 a.m. A Las Vegas casino has taken the foray into online poker for the first time. South Point launched a free-play online poker site, SouthPointPoker.com, earlier this month and Monday opened it to the general public. It was previously only available to members of the casino’s players club. “People talk about us being old school, but that doesn’t mean we aren’t on the forefront of technology either,” said Tom Mikovits, a South Point spokesman. South Point is specifically looking ahead to a day when online poker is regulated in the United States. South Point officials are hopeful it could happen as early as next year and wanted to be in position to offer real-money poker on the Internet when the day comes.

“The obvious reason is you would want people on your site already playing so we are hoping to get that with the free site,” Mikovits said. Now it’s time to go a step further. PurePlay. Come to PurePlay Casino and Win Big without the Risk! 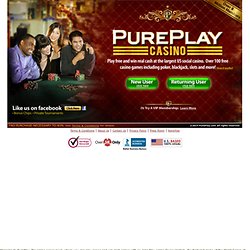 Play at the world’s largest online social casino destination site for FREE! Join millions of players and win at over 100 exciting games including Multiplayer Poker, Slots, Blackjack, Bingo, Video Poker, Roulette and more! Take your winnings and use them anywhere in the casino. See if you can advance through over 50 levels of game play unlocking new games and free bonuses to become a high roller. Or head to our poker tournaments and play free poker for real cash without the risk of losing any of your money – Over $100,000 paid monthly! New players start with 10,000 play money chips and receive free daily log in bonuses. Play money chips are for entertainment purposes only and are not refundable, exchangeable, replaceable, redeemable or transferable for real-world funds or prizes under any circumstances. ClubWPT. Chiligaming. French-facing online gaming operator, Chiligaming, has announced the launch of a free-play online poker network in the U.S. 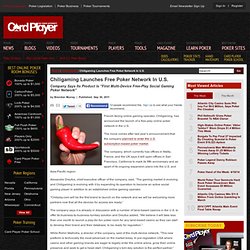 The move comes after last year’s announcement that the company planned to enter the U.S. subscription-based poker market. The company, which currently has offices in Malta, France, and the UK says it will open offices in San Francisco, California to mark its fifth anniversary and as apart of its ongoing expansion plans into the U.S. and Asia-Pacific region. Alexandre Dreyfus, chief executive officer of the company, said, “The gaming market is evolving and Chiligaming is evolving with it by expanding its operation to become an active social gaming player in addition to an established online gaming operator. “Chiliplay.com will be the first brand to launch on the network and we will be welcoming more partners now that all the devices for access are ready.”