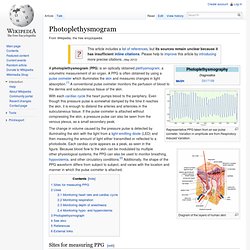 Variation in amplitude are from Respiratory Induced Variation. A photoplethysmogram (PPG) is an optically obtained plethysmogram, a volumetric measurement of an organ. A PPG is often obtained by using a pulse oximeter which illuminates the skin and measures changes in light absorption.[1] A conventional pulse oximeter monitors the perfusion of blood to the dermis and subcutaneous tissue of the skin. Diagram of the layers of human skin With each cardiac cycle the heart pumps blood to the periphery. The change in volume caused by the pressure pulse is detected by illuminating the skin with the light from a light-emitting diode (LED) and then measuring the amount of light either transmitted or reflected to a photodiode. Sites for measuring PPG[edit] Project Lab. MQ-3 Alcohol Sensor, Breakout Board. A lot has happened since our last article was published and to celebrate the continuance of bildr we’ll be playing with the MQ-3 Alcohol Gas Sensor. 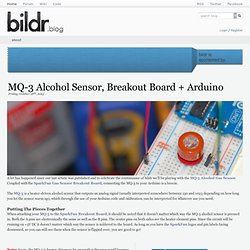 Coupled with the SparkFun Gas Sensor Breakout Board, connecting the MQ-3 to your Arduino is a breeze. The MQ-3 is a heater-driven alcohol sensor that outputs an analog signal (usually interpreted somewhere between 150 and 1023 depending on how long you let the sensor warm up), which through the use of your Arduino code and calibration, can be interpreted for whatever use you need. Putting The Pieces Together When attaching your MQ-3 to the SparkFun Breakout Board, it should be noted that it doesn’t matter which way the MQ-3 alcohol sensor is pressed in. Both the A pins are electronically the same as well as the B pins. Vibrating Glove Teaches Piano, Helps Patients Recover After Spinal Cord Injuries. With a name like “Mobile Music Touch,” what might spring to mind is an awkwardly named iPhone app in some way related to music. 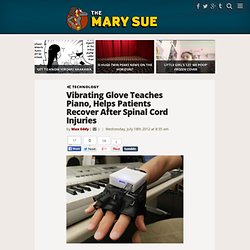 But its actually a novel treatment for people who have lost sensation in their hands from a spinal cord injury. Not only does it have therapeutic benefits, but it also teaches people to play the piano in the process. Developed by Tanya Markow at Georgia Tech, the MMT is a pretty simple device consisting of a glove, a control box, and five small vibrating motors. These have two functions: The first, to vibrate continuously and help restore feeling and mobility to people suffering from spinal cord injuries. Programmable LilyPad EL-Wire Dress : Solder Components. Keyes Microphone Sound Detection Sensor Module for Arduino (Works with Official Arduino Boards) Para habilitar los descuentos por volumen en este sitio, utilice el código de cupón: BULKRATE durante el pago. 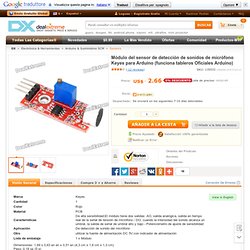 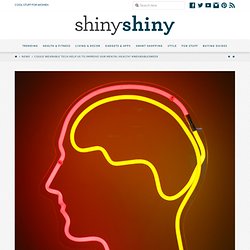 However, many of us know that being truly healthy both inside and out requires much more of a holistic approach. Eat well but don’t push your boundaries creatively or challenge yourself at work and you may feel stifled. Work on your body loads at the gym but don’t concentrate on the tension and stress inside and you’re likely to just be burying a lot of inner conflict. There needs to be more joined up thinking when it comes to our physical health, mental health and overall wellbeing. DIY: Make Your Own Bend / Flex Sensor for under $7. Sound sensitive lights w/ sound sensor & Arduino. Sound sensors can be used for a variety of things, one of them could be turning lights off and on by clapping. 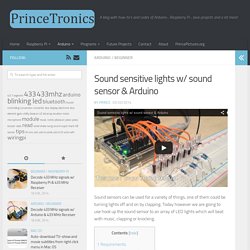 Today however we are going to use hook up the sound sensor to an array of LED lights which will beat with music, clapping or knocking. Almost any Arduino – I used the popular Arduino UnoSome breadboard cablesA breadboardA sound sensor – I used a high sensitivity sound detection sensor module by KeyesAt least 1 LED light – I used 7! The more the better! As many LEDs you are using you should have resistors. 333 ohm resistors should do the trick for most LEDs but I used 100 ohm ones. Build Smart Watch with Lilypad tutorial.

Overview Create your own multifunctional smart watch with the LilyPad Arduino, a microcontroller board designed for wearables and e-textiles. 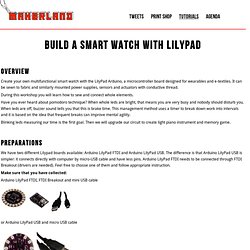 It can be sewn to fabric and similarly mounted power supplies, sensors and actuators with conductive thread. During this workshop you will learn how to sew and connect whole elements. BITalino.pdf. Franklin_Smart_Watches.pdf. Biofeedback and neurofeedback systems. The Respiration Sensor is used to monitor abdominal or thoracical breathing, in biofeedback applications such as stress management and relaxation training. 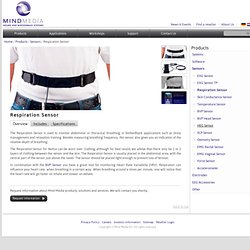 Besides measuring breathing frequency, this sensor also gives you an indication of the relative depth of breathing. The Respiration Sensor for NeXus can be worn over clothing, although for best results we advise that there only be 1 or 2 layers of clothing between the sensor and the skin. The Respiration Sensor is usually placed in the abdominal area, with the central part of the sensor just above the navel.

The sensor should be placed tight enough to prevent loss of tension. DIY Muscle Sensor / EMG Circuit for a Microcontroller. Measuring muscle activation via electric potential, referred to as electromyography (EMG) , has traditionally been used for medical research and diagnosis of neuromuscular disorders. 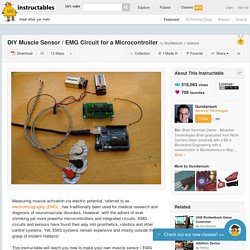 However, with the advent of ever shrinking yet more powerful microcontrollers and integrated circuits, EMG circuits and sensors have found their way into prosthetics, robotics and other control systems. Yet, EMG systems remain expensive and mostly outside the grasp of modern hobbyist. This instructable will teach you how to make your own muscle sensor / EMG circuit to incorporate into your next project. Use it to control video games, robot arms, exoskeletons, etc. Click on the video below for a demonstrations on how to hook up and use your EMG circuit board! Start [NeuroSky Developer - Docs] Medscape Log In. Fabric Bend Sensor. Using conductive thread, Velostat and neoprene, sew your own fabric bend sensor. 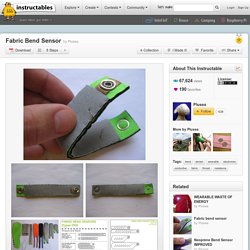 This bend sensor actually reacts (decreases in resistance) to pressure, not specifically to bend. But because it is sandwiched between two layers of neoprene (rather sturdy fabric), pressure is exerted while bending, thus allowing one to measure bend (angle) via pressure. Make sense? Watch below: So basically you could use most any pressure sensor to measure bend, but this one I find gives me the best results (sensitivity) for measuring the bend of human joints when attached to the body.

The resistance range of this bend sensor depends a lot on the initial pressure. This sensor is really very simple, easy to make and cheap compared to buying one. I am also selling these handmade fabric bend sensors via Etsy. LilyPad Arduino Blinking Bike Safety Patch : Sew the LilyPad pins to the LED positive leads. MindCare 2014: Towards a Smart Wearable Tool to Enable People with SS…

Sensoria® Fitness Socks - SensoriaFitness. This product includes: One pair of smart socks completely made high-tech running friendly fabricOne electronic anklet that magnetically snaps on the cuff of one of the sockOne anklet charger A dedicated mobile application that monitors and guides you through real-time audio cues while you run Additional socks can be purchased separately. Sensoria® socks are infused with proprietary 100% textile sensors.

They are paired with a Bluetooth Smart cool and detachable anklet that not only delivers superior accuracy in step counting, speed, calories, altitude and distance tracking, but goes well beyond that to track cadence, foot landing technique and weight distribution on the foot as you walk and run. Sensoria® may help you to identifies injury-prone running styles (heel striking, overpronating, etc.), then leverages a mobile app to coach the runner in real-time via audio cues. NOTE: Real-Time data collection and Virtual Coach REQUIRES Bluetooth Smart enabled phone. Develop With Boogio · Boogio · Make your shoes smart. Epic Semiconductors. LED a tempo di musica [Tutorial] ITA. Biocouture.co.uk/wp-content/uploads/2014/02/Biocouture-Grow-your-own-material-recipe-creative-common-license.pdf. CapacitiveSensor Arduino Library with Teensy, for Capacitive Touch and Promimity Sensing.

CapacitiveSensor, written by Paul Badger, lets you create sensors that can detect touch or proximity. Download: CapacitiveSensor.zip (Version 04) Hardware Requirements. Turn Your Spare Pocket Change into DIY Batteries with This Penny Power Hack. What's a penny worth these days? Voltage - What resistor to use with this RGB LED. Sewing Electronics at Hawaii STEM Conference. The Hawaii STEM Conference was held March 30/31st at the Marriott Hotel in Wailea, Maui HI. This is an annual gathering hosted by MEDB’s Women in Technology (link) to bring together students and teachers from Hawaii middle and high schools for classes and sharing various STEM (Science Technology Engineering and Math) topics. This year Maui Makers was invited to repeat the Sewing Electronics class taught at the February “Introduce a Girl to Engineering Day” event also sponsored by MEDB’s WIT.

The 2 hour class was listed as “Creative Innovation”, promising: “The way things are invented is changing rapidly. Technology is now available to create innovative products on deemed, locally at low cost. Make the World’s Best Robot Costume! While I’m sure there are more spectacular versions out there, seeing Jax in his homemade LED robot costume rocks my world! I mean, seriously? Program your Design. Drawing Fashion. 03 November 2010 – 06 March 2011 Drawing Fashion celebrates a unique collection of some of the most remarkable fashion illustrations from the twentieth and twenty first centuries. Three Ideas Wearable Designers Should Steal From This Smart Medical Device. Computing for Human Experience.

Semantics empowered Sensors, Services, and Social Computing on ubiquitous Web In his influential paper “The Computer for the 21st Century,” Mark Weiser talked about making machines fit the human environment instead of forcing humans to enter the machine’s environment[1].He noted, “The most profound technologies are those that disappear. Anouk Wipprecht. Wearable Electronics (Smart Textile) Market By Components, Applications, Products & E-Materials -2018. The Wearable Technologies Innovation World Cup 14/15 is coming soon! Result List: Fashioning Technology: A DIY Intro to Smart Crafting: Start here for books, articles & more. Don't miss Smart Fabrics and Wearable Technology 2014! Wearable Tech. Internet of Things. These Hair Clips Call The Cops If You Are Attacked - nexpected. The humble hair clip has now transformed into a crime-fighting gadget for women that can detect an attack and record evidence — all while contacting the emergency services.

A US-based couple has designed hair clips with built in crime-fighting technology. Rachel Emanuele, graduate student at the University of Arizona, and her husband Arthur are developing the hair clip which has sensors and works with a mobile app, 'mirror.co.uk' reported. The hair clip, which has an accelerometer, detects strikes to the head and uses Bluetooth to send signals to call for help and collect data for evidence to aid in prosecution. Ayliffe Brown.

Intelligent Hampster. 26th December 2013 Video I made an Electromagnetic Motor in my Energy course at Amherst College. Futuristic Art.