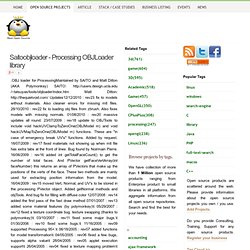 Also cleaner errors for missing mtl files. 28/10/2010 : rev22 fix to loading obj files from zbrush. Also fixes models with missing normals. 01/08/2010 : rev20 massive updates all round. 23/07/2009 : rev18 update to OBJTools to include void hackUVClampToZeroOne(OBJModel m) and void hackUVMapToZeroOne(OBJModel m) functions. These are "in case of emergency break UV's" functions. Added by request. 18/07/2009 : rev17 fixed materials not showing up when mtl file has extra tabs at the front of lines. Bug found by Noirmain Pierre. 16/06/2009 : rev16 added int getTotalFaceCount() to get the number of total faces. Please enable JavaScript to view the <a href=" powered by Disqus.

Related Products Visualization Toolkit. A Wearable Display for Team Sports » Tutorial: How to Control EL Panels or Wire Using a Microcontroller. One of the key aspects of this project is to be able to control wearable displays using a wearable computer. 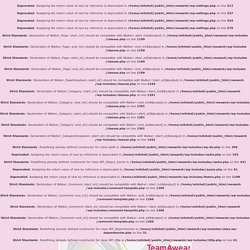 The wearable displays I am using are Electroluminescent (EL) Panels and Wire. These displays are not like regular LED’s cannot be switched on with a microcontroller quite so easily, as in this example. Sparkfun/MPU-9150_Breakout. Gait tracking with x-IMU. Gait-Tracking-With-x-IMU/Gait Tracking With x-IMU at master · xioTechnologies/Gait-Tracking-With-x-IMU. Logi-projects/AVC2013/imu-python-wrapper/mpu9150-python.c at master · fpga-logi/logi-projects.

Www.freescale.com/files/sensors/doc/app_note/AN3461.pdf. Guide to gyro and accelerometer with Arduino including Kalman filtering. Hallo everybodyI recently bought this analog 6DOF (six degrees of freedom) IMU board ( from watterott.com. 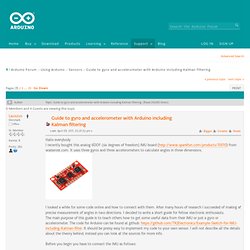 It uses three gyros and three accelerometers to calculate angles in three dimensions. Real Time Plotting Tool ( Oscilloscope ) Hello Rob, Thanks for your input. - For analog signals I would like to have a running average line. 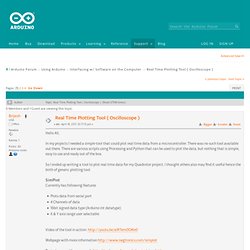 This can be based on a (configurable) number of samples or the samples in the last second/minute/...Nice idea, it is added to the list of things to be done. Guide to gyro and accelerometer with Arduino including Kalman filtering. This guide was first posted at the Arduino forum, and can be found here: I just reposted it, so even more will get use of it. 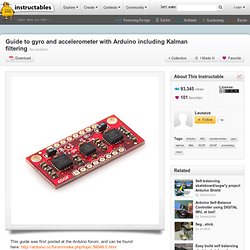 The code can be found here: Hallo everybody I recently bought this analog 6DOF (six degrees of freedom) IMU board ( from watterott.com. It uses three gyros and three accelerometers to calculate angles in three dimensions. What Is a Source Measure Unit (SMU)? 1. 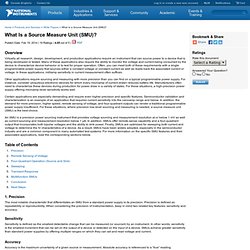 Precision The most notable characteristic that differentiates an SMU from a standard power supply is its precision. Precision is defined as repeatability or reproducibility. When considering the precision of instrumentation, keep in mind two related key features: sensitivity and accuracy. Sensitivity. LilyPad Arduino – sensing ambient temperature. This project uses a temperature sensor and five LEDs sewn into a wrist warmer to respond to ambient temperature. If the temperature drops below 12°C, the lights start fading in and out. If the temperature is 1°C or below, the lights twinkle. This guide is written for Mac OS X. (tl;dr: Wrist warmers are practical warming devices, they can also tell you when it’s cold enough to wear them, through the application of pretty twinkling lights.) What you’ll need The following LilyPad Arduino components.

These LilyPad components come bundled in the LilyPad e-textile Beginner’s Kit. A LilyPad Simple boardTemperature Sensor5 white LEDs110mAh Lithium Polymer BatteryLilyPad FTDI Basic (for connecting to computer using a USB cable – the rectangular component in the first picture above)Conductive threadSewing needle Additional components. How to make a Heating and Cooling Jacket : Writing the Code. Once you have all your sensors in the jacket you must write the code to get the LEDs to fade according to the temperature of the body. 1. 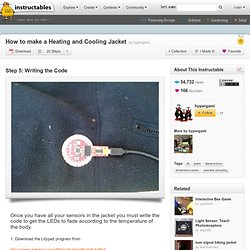 Download the Lilypad program from Then you will be able to program your Lilypad. 2. Plug in your Lilypad to the computer and make sure the settings in the Arduino program are selected for the right board. Electromagnet Superhero Glove. For a class assignment, I needed to make something fabric-based which took an Arduino, some programming, and at least two inputs and outputs. 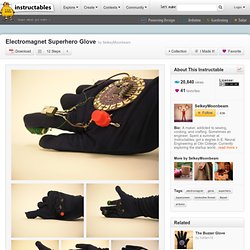 After sketching a few different ideas, I hit on this one: an electromagnetic glove for MagnetoGirl. It sprang to life for me, because magnetism is an invisible force which can seem magical. Also, a superhero can be given life, character, and (the best part) a cool costume. I decided to make an opera glove with some embedded circuitry. The electromagnet is in the index finger of the right hand; the electromagnet (and also the on-Arduino LED for pin13) are on while the red button is held down; there are sensors made of conductive thread on the palm and pad of the ring finger which, when touched together, disable the electromagnet while the button is still held down (but the LED stays on).

Cjb/lilypad-email-shirt. Learn.adafruit.com/downloads/pdf/rgb-led-strips.pdf. Fiber Optic Dress. The design of the dress followed the fiber optics that it needed to support. 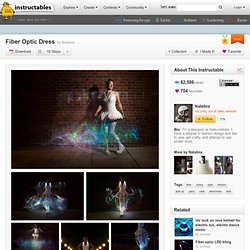 As there is one central light source, I designed the back to include a pouch for the handle, and the straps of the dress to bring the fiber optics from the center back to the front, and back around the body to an even distribution at the hips. Make Your Own LED Shoes That Light Up When You Walk. How to make a LilyPad Arduino LED skirt. LED Current Limiting Resistors. LED Current Limiting Resistors Skill Level: Beginner by a1ronzo | December 02, 2010 | 36 comments Limiting current into an LED is very important. 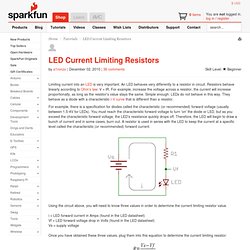 An LED behaves very differently to a resistor in circuit. Resistors behave linearly according to Ohm's law: V = IR. Conductive Thread Overview. Back in 2004 when I first became fascinated with e-textiles, there were virtually no resources to purchase conductive thread commercially. I was fortunate enough to be a graduate student at the time and convinced manufacturers out of my sheer curiosity to mail me samples of their spools of conductive thread. Now in 2009 there is a growing number of threads available commercially and if I have my way :-), soon your local craft and hobby stores will be carrying small affordable spools. NeoPixel Tiara. Fiber Optic Fabric - Black (40x75 cm) Men's Shirt Pattern and Tutorial. Today I’m going to share a free men’s shirt pattern and tutorial.

A while back you may remember that I guest posted on The Train to Crazy in her Sewing for Men series. I sewed a shirt for my hot Hubby, and then people wanted me to share the pattern and my cool brother said he would model a shirt made from the same pattern in Robert Kaufmen Architextures fabric that I fell in love with, and this post came together. So, before we get to the men’s shirt pattern and tutorial I give you the Math gEEk shirt. The EE is because li’l bro is finishing his degree in Electrical Engineering (aka EE or double E) and all the math on this fabric made me think of him (and my dad, who is also a double E). This shirt is made from the same pattern I originally used to make Hubby’s shirt, which you’ll be able to download below. I got li’l bro to help me recreate the formulas on glass from A Beautiful Mind, as well as capturing him where he actually works/studies right now – on the computer.

Soldering to EL Wire. Waterproof your Wearables : Materials Checklist. Below are a list of supplies that are the recommended for this instructable. Of course certain items can be completely eliminated or substituted with others. In order to for us to focus on teaching you the encapsulation technique and to easily demonstrate the waterproofing performance, we be creating a simple electronic device soldering a simple wearable component (LilyPad LED) and attaching it to a power source with alligator clips. Once you've gotten down the encapsulation technique, go buck wild with testing different or similar simple or complex electronic devices and their performance in different water-based environments! Waterproof your Wearables : Materials Checklist. Electronic Textiles: Wearable Computers, Reactive Fashion, and Soft Computa...: Start here for books, articles & more. Innovations @ Georgia Tech. Atlanta — Thad Starner has been wearing his computer since 1993. What began as a short-term experiment became a life-long project, some would even say a mission.

Starner is a guru of sorts when it comes to wearable computing. Several of his graduate students in the College of Computing at Georgia Tech also use wearable computers on a daily basis. Fashioning Technology. Arduino Lilypad Interactive Passion Sensing Scarf. Snap Assortment - 30 pack (male and female) - DEV-11347. Fabric Button Pad - 5 Buttons - COM-11813. LilyPad MP3 - DEV-11013. How to sew a hooded scarf or scoodie! First, fold your fabric lengthwise in half, right sides together. Press it well on the highest setting (steaming would be good) so you get all the wrinkles out and develop a nice crisp line at the fold. Take your favorite hoodie and turn it inside out and make the hood as flat as possible along the middle fold. Place the opening of the hood straight along the fold a couple of inches away from the edge. You'll want to trace a half inch away from the hood all the way around it, until you hit shoulder area.

Now, you'll want to trace a couple inches down from the bottom hood seam, and begin taking your line horizontally back to the fold. Based on how thick you want the scarf to be, you'll draw the next vertical line. Finding favourites... Leah Buechley. Machine Embroidery covering Conductive Thread.