The WWI Battleships That Saved (And Doomed) the British Empire. The HMS Dreadnought underway in 1906. 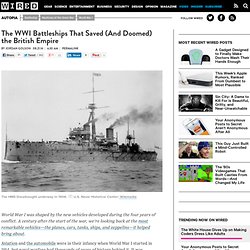 U.S. Naval Historical Center/ Wikimedia World War I was shaped by the new vehicles developed during the four years of conflict. A century after the start of the war, we’re looking back at the most remarkable vehicles—the planes, cars, tanks, ships, and zeppelins—it helped bring about. Aviation and the automobile were in their infancy when World War I started in 1914, but naval warfare had thousands of years of history behind it. At the time, the backbone of the British Royal Navy’s Grand Fleet consisted of dozens of dreadnought battleships. Though still a matter of some dispute amongst military historians, World War I largely ushered in the end of British dominance of the high seas and the beginning of the end of the British Empire.

“The lure of a convenient enemy, intent on fighting a battle that the Royal Navy relished, was too much,” says Angus Ross, a professor at the US Naval War College in Rhode Island who has written about the topic. Wikimedia. All the Stuff Soldiers Have Carried in Battle, From the 11th Century to Today. A recent project from Thom Atkinson's documented the kits british soldiers took into battle throughout the ages. 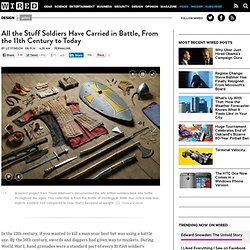 This collection is from the Battle of Hastings in 1066. You notice how few objects soldiers had compared to now--that's because of weight. Thom Atkinson Here are the basics for a mounted knight during the siege of Jerusalem in 1244. Among them, a shield, crescent axe and glaive, a broken sword that was welded to a piece of wood--it was considered a new form of weaponry at the time. Atkinson found many of the items from the reenactment community. A man at arms in the Battle of Bosworth (1485) would use a poleax, an axe-like weapon that's mounted to a pole. This kit, from 1588, is the first in the series with a gun. Atkinson says the bold colors are meant to prevent soldiers from shooting one of their own. The kit for the Battle of Waterloo in 1815 included a fife, a flute-like instrument that was played at the head of the company. [Hat tip: Telegraph] The Western Front — 1914 - 1918. West Front SummaryLate during the summer of 1914, train stations all over Europe echoed with the sound of leather boots and the clattering of weapons as millions of enthusiastic young soldiers mobilized for the most glorious conflict since the Napoleonic Wars. 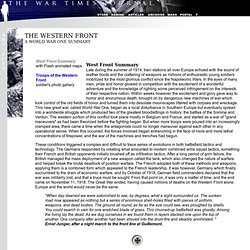