4 of the Best Marine Arena Team Builds. This hub attempts to outline the best team builds for Starcraft's Marine Arena, including ideas on how to perform best with the builds and things to look out for. 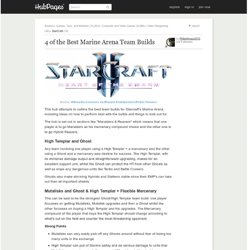 The hub is set out in sections like "Maraiders & Reavers" which means that one player is to go Maraiders as his mercenary compound choice and the other one is to go Hybrid Reavers. High Templar and Ghost Any team involving one player using a High Templar + a mercenary and the other using a Ghost and a mercenary was destine for success. The High Templar, with its immense damage output and straightforward upgrading, makes for an excellent support unit, whilst the Ghost can protect the HT from other Ghosts as well as snipe any dangerous units like Tanks and Battle Cruisers. Ghosts also make storming Hybrids and Stalkers viable since their EMP's can take out their all important shields.

Mutalisks and Ghost & High Templar + Flexible Mercenary Playing a High Templar requires a good degree of micro which is too much for some players. 3 of the Best Marine Arena Strategies. Marine Arena - When to Pick Each Hero. 3. 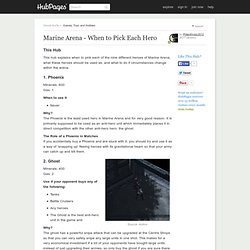 Thor Minerals: 1150Gas: 3 Use if your opponent uses any of the following: MutalisksWraithsVoid RaysStalker LancesWarp ZealotsClumps of small units (marines/marauders/Firebats/not Zerglings or large units) Why? The Role of the Thor in Matches Support unit with the main armyScaring off enemies without hero-army compositions or GhostsUpgrading to Odin and harassing mercenary compounds 4. Minerals: 475Gas: 1 When to Use: Never Why? Forgetting that it's more economical to buy mercenary damage upgrades, heroes like the Thor, High Templar, Infestor or Brutalisk are more useful on the field than the Hunter Killer because they A) do more damage and B) Are less easy to pick off.

The Role of the Hunter Killer in Matches Support unit that helps deal more damage in small concave vs small concave situations (e.g. 5. Infestor. How to use the Hight Templar in Marine Arena. Why the High Templar The High Templar (HT) is by far the best hero of all to use because even it's counter, the Ghost, can be stifled in his tracks with the use of feedback. 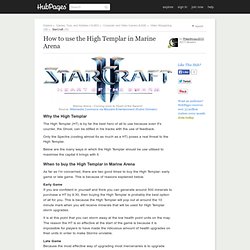 Only the Spectre (costing almost 6x as much as a HT) poses a real threat to the High Templar. Below are the many ways in which the High Templar should be use utilised to maximise the capital it brings with it. When to buy the High Templar in Marine Arena As far as I'm concerned, there are two good times to buy the High Templar: early game or late game. Early GameIf you are confident in yourself and think you can generate around 500 minerals to purchase a HT by 9:30, then buying the High Templar is probably the best option of all for you. It is at this point that you can storm away at the low health point units on the map. Late GameBecause the most effective way of upgrading most mercenaries is to upgrade their damage, by late game, there are usually very high damage, but very low health units.

How to use the Ghost in Marine Arena. Why Learn the Ghost? 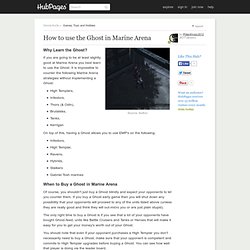 If you are going to be at least slightly good at Marine Arena you best learn to use the Ghost. It is impossible to counter the following Marine Arena strategies without implementing a Ghost: High Templars,Infestors,Thors (& Odin),Brutalisks,Tanks,Kerrigan On top of this, having a Ghost allows you to use EMP's on the following: Infestors,High Templar,Ravens,Hybrids,StalkersGabriel Tosh marines. 3 of the Best Marine Arena Tips. Tip 1: Open Marauder or Zergling ZealotsMarauders and Zerglings have some sort of late-game potential whilst Zealots are virtually useless late game because of their 'charge' abilities and because they are melee units. 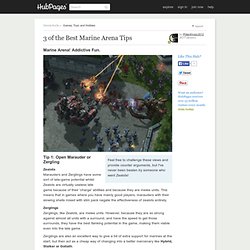 This means that in games where you have mainly good players, marauders with their slowing shells mixed with stim pack negate the effectiveness of zealots entirely. ZerglingsZerglings, like Zealots, are melee units. However, because they are so strong against almost all units with a surround, and have the speed to get those surrounds, they have the best flanking potential in the game, making them viable even into the late game. Zerglings are also an excellent way to give a bit of extra support for marines at the start, but then act as a cheap way of changing into a better mercenary like Hybrid, Stalker or Goliath.