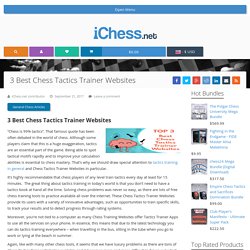 That famous quote has been often debated in the world of chess. Although some players claim that this is a huge exaggeration, tactics are an essential part of the game. Being able to spot tactical motifs rapidly and to improve your calculation abilities is essential to chess mastery. That’s why we should draw special attention to tactics training in general and Chess Tactics Trainer Websites in particular. It’s highly recommendable that chess players of any level train tactics every day at least for 15 minutes. Moreover, you’re not tied to a computer as many Chess Training Websites offer Tactics Trainer Apps to use all the services on your phone. Again, like with many other chess tools, it seems that we have luxury problems as there are tons of Chess Tactics Trainer Websites available and it becomes more and more difficult to figure out which ones are best. For that reason, the following article is devoted to 3 of the best Chess Tactics Trainer Websites. 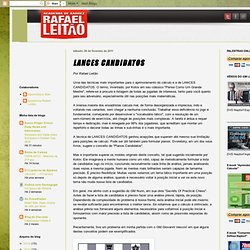 Homepage. Problem books. Daily Chess Problem. Use the mouse to move the pieces for both sides. 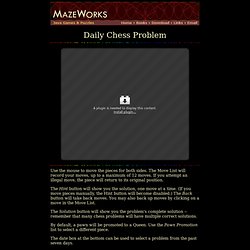 The Move List will record your moves, up to a maximum of 12 moves. If you attempt an illegal move, the piece will return to its original position. The Hint button will show you the solution, one move at a time. (If you move pieces manually, the Hint button will become disabled.) The Back button will take back moves. The Solution button will show you the problem's complete solution -- remember that many chess problems will have multiple correct solutions. By default, a pawn will be promoted to a Queen. The date box at the bottom can be used to select a problem from the past seven days. If you're new to chess, visit some of the Chess web sites listed on the Links page for information about the rules of chess, move notation, etc.

Chess Problems. News: Old chess problem books have recently become much easier to access, thanks to Google Books and similar services, as well as Kessinger and other reprint publishers. 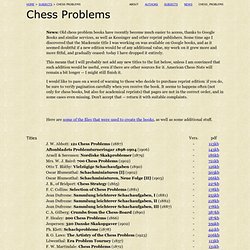 Some time ago I discovered that the Mackenzie title I was working on was available on Google books, and as it seemed doubtful if a new edition would be of any additional value, my work on it grew more and more fitful, and gradually ceased: today I have dropped it entirely. This means that I will probably not add any new titles to the list below, unless I am convinced that such addition would be useful, even if there are other sources for it. 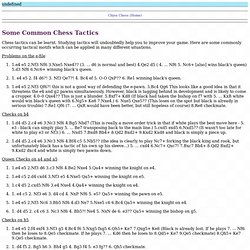 Studying tactics will undoubtedly help you to improve your game. Here are some commonly occurring tactical motifs which can be applied in many different situations. Problems on the e-file 1.e4 e5 2.Nf3 Nf6 3.Nxe5 Nxe4?? Checks on b4 1.d4 d5 2.c4 e6 3.Nc3 Nf6 4.Bg5 Nbd7 (This is really a move order trick in that if white plays the best move here - 5. e3 - black can simply play 5. ... Queen Checks on a4 and a5. Chess Tempo. Chess Tactics Server.