Glenbernie Orchard invites foragers into the forest to pick free fruit. Usually, people pay to pick their own stone fruit at Glenbernie Orchard but this week fourth-generation farmer Jo-Anne Fahey had to think outside the box. 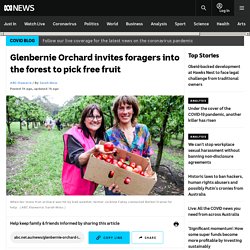 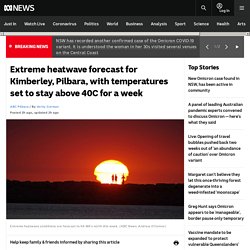 Key points: Marble Bar is expected to reach 46 degrees Celsius on FridayHealth authorities say young children, older residents and animals are at most risk from the heatFirefighters will be closely monitoring the dangerous conditions The Bureau of Meteorology is forecasting a run of hot days in the Pilbara and Kimberley, with temperatures in some areas expected to exceed 45 degrees Celsius. Several towns in the north, including Marble Bar, Paraburdoo, Fitzroy Crossing, Kununurra and Wyndham, can all expect temperatures above 40C every day this week. Spectacular cloud formation brings rain, thunder and lightning to parts of the north. It descended over Mackay like an alien craft — a massive shelf cloud that covered large parts of the city. 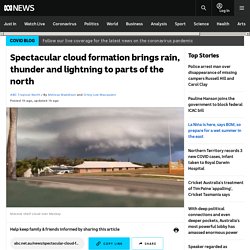 Key points: The super cell formed late in the afternoon with the system seen rotating over the cityFalls of more than 60-millimetres were recorded in some areasStorms are forecast for the rest of the week A hot and humid day created the perfect conditions for the storm cell and the spectacular cloud formation, the likes of which many had never seen before. BOM forecasts more wet weather for the east while the Top End swelters. Farmers start to tally costs of Lachlan River flood, as peak moves downstream. Farmers in the Lachlan Valley are starting to tally up the costs as floodwaters move down the river system — with some facing tens of millions of dollars in crop losses.

Key points: Farmers say the impact of flooding on the Lachlan River could be devastatingThe river peaked in town below the 2016 level but many farmers report more water and damage than five years agoMore rain is forecast this weekend, leaving the region anxious about further inundation "This was all meadow grass, good grazing grass, and it's destroyed — it won't come back," Laurie Norris said while riding Blossom to inspect the flood damage on his property on the outskirts of Forbes. Riding a horse is the only way to access the farm with a foot of water across the paddocks where he lost his lucerne crop that was within days of being cut for hay.

"That was going to be our feed for the stock for the next 12 months, so now we'll have to buy feed," he said. "To have all this at risk is devastating," Mr Francis said. Wild weather leaves thousands without power in Melbourne, regional Victoria as winds lash state. The Victorian State Emergency Service (SES) is responding to hundreds of calls for help after storms battered the state last night, with more wild weather on the way. 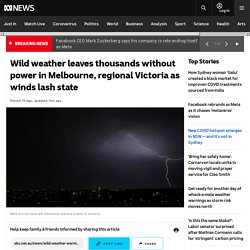 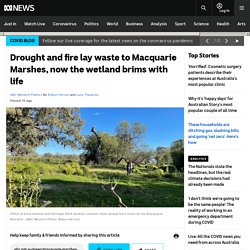 Key points: The Macquarie River ran dry at Warren and the marshes suffered a major fire in 2019Following good rainfall, rivers are flowing again and Burrendong Dam is more than 100 per cent fullAerial and ground surveys show birds are returning to the wetlands. BOM severe weather outlook for 2021-22 forecasts heightened risk of floods, cyclones. The severe weather season is here, and floods and cyclones are on the forecast. 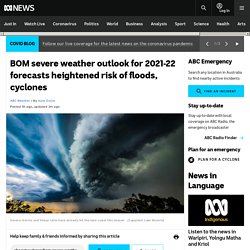 Key points: The risk of flooding is above average for the east and north this yearThere is a slightly above average risk of tropical cyclones The risk of bushfires, heatwaves and thunderstorms is normal this summer The Bureau of Meteorology has just released its outlook for the severe weather season, and senior climatologist Greg Browning said like every year, we need to be prepared. 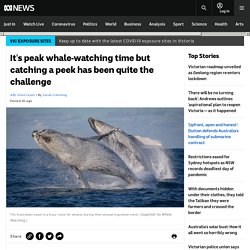 Key points: Fewer sightings of humpback whales close to the coast this seasonResearchers say the East Australian Current is influencing whale behaviour Whale watching tour operators say 'peak' southern migration underway The east coast of Australia is known as the "humpback highway" during winter and spring as whales migrate north to breed. But experts say there has been less traffic near popular beaches this year. Griffith Centre for Coastal Management researcher Dr Olaf Meynecke said it's been an unusual season with whales remaining further out to sea. "Very different to the last three years at least, because we've had the whales migrate quite far offshore," Dr Meynecke said. "There's a lot less happening closer to the coast. " Bureau of Meteorology says La Niña's an even chance to return for a second consecutive spring. The Bureau of Meteorology (BOM) has moved to a La Niña watch, indicating there is now a 50 per cent chance of the rain-bearing climate driver returning this spring. 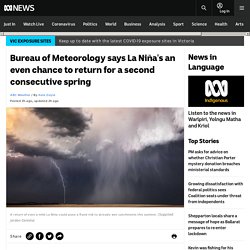 Key points: There is an even chance of La Niña returning for a second successive seasonThere are strong indications of wetter than average conditions for eastern AustraliaBut those same drivers could mean dry conditions in the continent's south-west While that is double the normal chance, there is no guarantee it will eventuate. Ozone recovery is offsetting Southern Hemisphere climate change trends in summer. If the latest climate report from the Intergovernmental Panel on Climate Change (IPCC) made anything clear, it was that much more needs to be done to reverse the impacts of climate change. 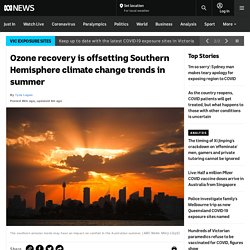 Key points: The IPCC says ozone recovery is reducing greenhouse gas emission impactsThat's affecting a major climate driver known as the Southern Annular ModeIt means rainfall and storm tracks that were moving away from Australia are being kept at bay But buried in the 1,000-page document of mostly alarming reading there was one positive gem. Our action in reducing ozone depletion is, in the short term, offsetting some of the impacts greenhouse gases are having on summer rainfall systems in the Southern Hemisphere. What does that mean? Winter, spring rains drive increased grassfire potential in Australia's eastern states.

Bushfires are more likely this spring, all the way from western Victoria to Townsville, according to the annual Seasonal Bushfire Outlook, Spring 2021. Key points: Frost patterns on windscreens a natural wonder of science. If you live in an area where frost covers car windscreens in a layer of ice, you may have marvelled at the delightful patterns on the glass. In southern Tasmania this week, some motorists woke up to frosty conditions — and a stunning array of swirls, spirals and crystalline landscapes on their windows. BOM NT predicts early onset of wet season build-up as July temperature records fall. People in the Top End are being warned to brace for an early return to sweatbox conditions, with predictions an early onset of the wet season will bring the cooler dry season temperatures to a premature end. Key points: Forecasters say hot and humid conditions could make a return as early as SeptemberIt's because of an uncommon phenomenon where the Indian Ocean Dipole is declared negativeSome July maximum temperature records have also been broken across the NT Bureau of Meteorology (BOM) modelling shows rain and high humidity levels are expected to envelop some parts of Northern Australia earlier than usual.

Victoria declares state energy emergency after power station damaged by storms. The Victorian government has declared a state energy emergency after the Yallourn power station and coal mine, in the Latrobe Valley, was damaged in recent flooding. The Yallourn power station supplies more than a fifth of the state's energyThe declaration will allow Energy Australia to undertake emergency works and divert river water away from the mineThe state government has announced a new payment for households still cut off from power.

Ex-tropical cyclone Seroja has already made its way into the Great Australian Bight and out to sea, dashing hopes for any desired boost to rainfall in the south-east. Wide Bay Burnett remains desperately dry despite La Niña drenching much of Australia. It is a map that tells an encouraging story for most of Australia but a cruel tale for an unlucky few. Recovery from record drought under way for farming communities in south-west Queensland. She-Oak and Sunlight exhibition is a tribute to Australia's golden light. 'Autumn predictability barrier' means April is the toughest month to make climate forecasts. Lake Pinaroo fills for first time in 10 years as Far West NSW welcomes heavy rains. BOM declares La Niña over – but that doesn't mean the rain is done.

From bushfires to flash flooding, what will the Australian summer of the future look like? The anatomy of a firestorm: Researchers use radar to peer into a bushfire phenomenon. Inland New South Wales rivers may never recover from the last drought, expert warns. Summer solstice 2020: Planets come out to play at end of longest day. Predicting river levels used to be guesswork, but a new tool now gives seven-day forecasts. Japanese snowstorm brings traffic to a halt on expressway in Niigata prefecture. First monsoon of the Top End wet season forecast to form off north-east Arnhem Land tomorrow - ABC News. The term has been used a lot over the past few days, so what exactly is a' king tide'? - ABC News. 13 young students and two adults taken to hospital after lightning strikes Gladstone school - ABC News. Queensland braces for record temperatures as heatwave intensifies in first days of summer - ABC News. Bureau of Meteorology says the NT experienced its hottest November in 100 years - ABC News.