Australian Government Department of Health. We know bushfire smoke affects our health, but the long-term consequences are hazy. In previous years, Australians might have been exposed to bushfire smoke for a few days, or even a week. 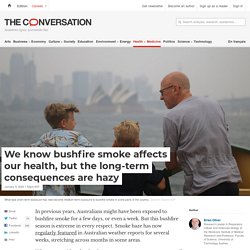 But this bushfire season is extreme in every respect. Smoke haze has now regularly featured in Australian weather reports for several weeks, stretching across months in some areas. What we considered to be short-term exposure we must now call medium-term exposure. Pollution experts team up to propose major new study into health impacts of bushfire smoke. Updated 14 Jan 2020, 10:13amTue 14 Jan 2020, 10:13am Australia's top pollution experts are teaming up to propose a major new study into the long-term health impacts of bushfire smoke. 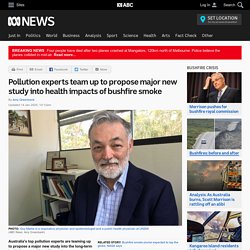 Key points: A team of Australian academics is seeking funding to study the health impacts of bushfire smokeA previous study looked at the effects of 45 days of smoke inhalationThat study found pregnant women were more likely to contract gestational diabetes Guy Marks from the University of New South Wales said he was not confident in the current health advice offered by authorities because there was very little evidence available.

"Are masks even that effective? He is putting together a team of two dozen top Australian researchers to investigate the medical fallout from the fires. It comes as Victoria is smothered in toxic fumes, causing Melbourne's air quality to be ranked the worst in the world. Some Sydney suburbs have recorded air quality more than 10 times worse than what is considered hazardous. Key points: Australia fires: Health impacts from bushfire smoke won't be known for years, experts say. "What we're finding now is that air pollution tends to affect all parts of the body," he said. 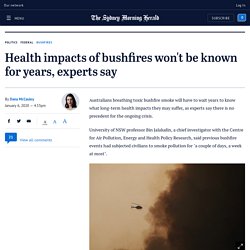 "There is increasing evidence around air pollution and neurological conditions, for example Parkinson's disease and Alzheimer's. " For Australians suffering through the bushfire crisis that has seen Sydney and Melbourne blanketed in smoke and Canberra recording the worst air quality in the world, the implications remain unclear. But Professor Jalaludin said researchers expected to see some level of increased risk. Satellite images reveal how smoke from Australia's east coast bushfires is crossing the Tasman Sea and blanketing New Zealand. "For individual people, the impacts could be low, but if there is pre-existing heart disease, high blood pressure and high cholesterol, air pollution might just tip you over into having a heart attack," Professor Jalaludin said.

Bushfires produce particulate-matter pollution - airborne particles that are small enough to enter and damage human lung tissue. Poor air quality caused by bushfire smoke posing serious risk for healthy people too, health experts warn - Health - ABC News. Doctors are warning even healthy people could develop serious illnesses, because of the smoke haze that's blanketed parts of the country, including some of our major cities, for weeks on end. 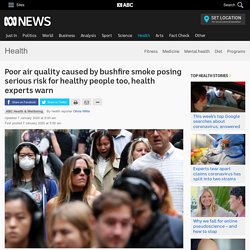 The Australian Medical Association (AMA) has warned prolonged exposure to toxic smoke could affect the health of many Australians. In a statement released late last week, AMA president Tony Bartone described the length and density of smoke exposure as "a new, and possibly fatal, health risk" most of us have never faced before. "With denser smoke haze and longer periods that people endure smoke inhalation, there is a much higher risk that previously healthy people will face developing serious illness," Dr Bartone said. Australia's bushfire crisis has killed at least 20 people, destroyed or damaged at least 2,000 homes, and led to emergency declarations in two states.

Air quality in Canberra recently reached more than 22 times the hazardous rating. NSW fires: Is bushfire smoke bad for your health? Bushfire smoke has continued to intermittently shroud some of Australia's major cities as bushfires rage around the country. 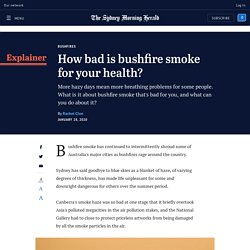 Sydney has said goodbye to blue skies as a blanket of haze, of varying degrees of thickness, has made life unpleasant for some and downright dangerous for others over the summer period. Canberra's smoke haze was so bad at one stage that it briefly overtook Asia's polluted megacities in the air pollution stakes, and the National Gallery had to close to protect priceless artworks from being damaged by all the smoke particles in the air. In Melbourne, the smell of smoke peaks when the wind dies down and the temperature rises, causing smoke bands higher in the atmosphere to descend on the city and suburbs. In January, residents were breathing smoke from fires burning in East Gippsland, along with smoke from NSW and from as far away as Western Australia, said the state's chief health officer, Brett Sutton.

Australia's bushfire smoke is lapping the globe, and the law is too lame to catch it. Smoke from Australia’s bushfires has travelled far beyond its origins. 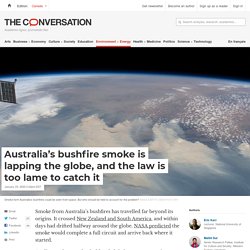 It crossed New Zealand and South America, and within days had drifted halfway around the globe. NASA predicted the smoke would complete a full circuit and arrive back where it started. As climate change takes hold and global temperatures rise, bushfires are set to increase in severity and frequency. The underlying cause of the fires and resulting smoke haze are often numerous - spanning both natural variability and climate change caused by individuals, governments and corporations. Legal and policy frameworks - local, national and international – fail to capture these diffused responsibilities.