Numbats return to the wild after thought to be extinct for a century. Another batch of six will be released within days with more coming late next year from Perth Zoo, in a bid to increase numbers in the national park to 270 within years. 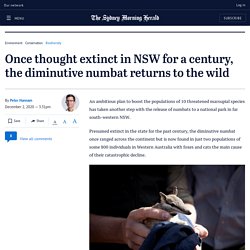 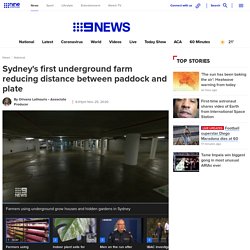 Four basement levels below the city streets in Barangaroo, in an office tower car park, Urban Green is now the largest vertical farm in Sydney. It features 35 verities of microgreens - seedlings of plants that are usually harvested early before being fully grown. From pink kale, spicy radish, coriander, basil and cabbage, the vertical garden is controlled almost entirely by artificial means including fans which imitates a light breeze to help the plans grow. Just four years on from when it first began, Urban Green now provides fresh produce to restaurants and chefs around the city. We found a huge flaw in Australia’s environment laws. Wetlands and woodlands will pay the price. From ethereal kelp forests off the south east Australian coast to grassy woodlands and their stunning wildflowers, many ecological communities are under threat in Australia. 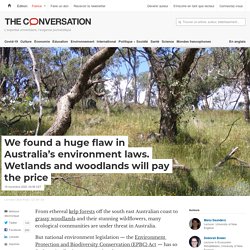 But national environment legislation — the Environment Protection and Biodiversity Conservation (EPBC) Act — has so far been ineffective at protecting them. In our recent paper, we identify a major flaw in the current approach to listing threatened ecological communities for protection under the EPBC Act: the requirement to meet unrealistic condition thresholds. In other words, where areas of a community do not meet these specific minimum thresholds, they’re considered too degraded to warrant conservation and aren’t protected under the EPBC Act. What’s an ecological community anyway? An ecological community is a group of species that co-exist in a specific type of habitat and interact with each other. 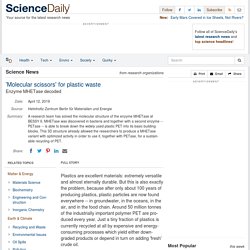 But this is also exactly the problem, because after only about 100 years of producing plastics, plastic particles are now found everywhere -- in groundwater, in the oceans, in the air, and in the food chain. Around 50 million tonnes of the industrially important polymer PET are produced every year. Just a tiny fraction of plastics is currently recycled at all by expensive and energy-consuming processes which yield either downgraded products or depend in turn on adding 'fresh' crude oil. After COVID-19, Here Comes More And Better Farming With Solar Panels. Clean Power Published on April 9th, 2020 | by Tina Casey Solar panels are sprouting on farmland like mushrooms after the rain, but there’s no such thing as a free lunch. 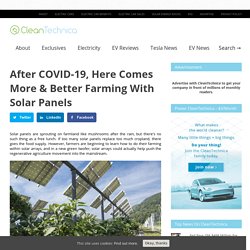 If too many solar panels replace too much cropland, there goes the food supply. However, farmers are beginning to learn how to do their farming within solar arrays, and in a new green twofer, solar arrays could actually help push the regenerative agriculture movement into the mainstream. Delhi Startup Powers 'Smart' Hydroponic Garden With AI! This smart garden is easy enough to use even for a 5-year-old child to grow herbs at home. 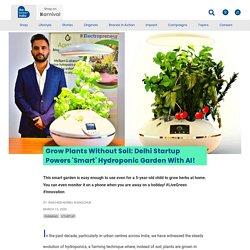 You can even monitor it on a phone when you are away on a holiday! #LiveGreen #Innovation In the past decade, particularly in urban centres across India, we have witnessed the steady evolution of hydroponics, a farming technique where, instead of soil, plants are grown in mineral nutrient solutions in water, which helps them to grow faster and garner a better yield. Promotion This technique uses up to 90 per cent less water than conventional soil-based farming and allows people to grow vegetables and herbs organically at home. 5 Ways To Generate Power When Living Off Grid. Living Off the Grid – Your Guide to Self-Sufficient Living. 5 Tiny Homes That Are Amazingly Affordable. News.com. Rob's spent 10 years building a sustainable house, he says it cost him 'less than $1,000' Amazon's viral $7K tiny home sells out instantly - 9Homes. There’s no denying that the tiny home market is shaking up the property game. 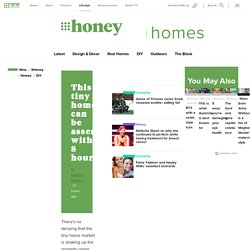 The idea of disconnecting from the world and going completely off the grid has become a major solution to avoid impossibly high rent. Off-the-grid DIY tiny house business wins international sustainability award. Updated about 2 hours agoSat 18 May 2019, 5:40am A Victorian tiny-house company has won an international award for helping to make cities safer, more resilient and sustainable. 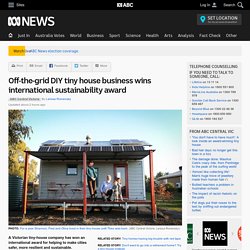 Home Biodigester Has You Cookin' With Gas in No Time. An ecologist’s dream is that human systems will model the closed loop systems of Mother Earth. 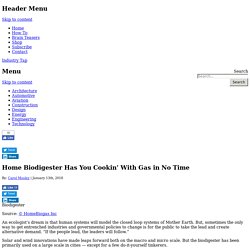 But, sometimes the only way to get entrenched industries and governmental policies to change is for the public to take the lead and create alternative demand. “If the people lead, the leaders will follow.” Solar and wind innovations have made leaps forward both on the macro and micro scale.