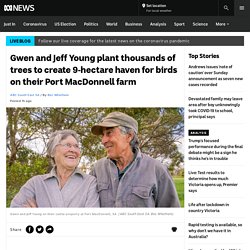 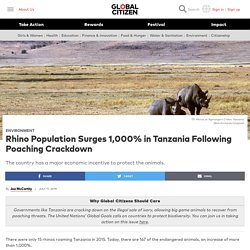 Mark Kucharski/Unsplash Why Global Citizens Should Care Governments like Tanzania are cracking down on the illegal sale of ivory, allowing big game animals to recover from poaching threats. The United Nations’ Global Goals calls on countries to protect biodiversity. You can join us in taking action on this issue here. Brazilian Photographer Restored An Entire Forest Ecosystem With 2.7 million Trees In Twenty Years. Nearly 5,000 People Stand In Rain For Hours To Save Boy With Cancer. The Climate Disobedience Center, which Ward co-founded, declared the mistrial "a resounding recognition of the threat of climate change," noting that one or more jurors refused to convict Ward on charges of sabotage and burglary for breaking into and shutting down a Kinder Morgan pipeline near Anacortes, Washington last year. Alternately, they were persuaded by his argument that he had acted out of necessity, in defense of the planet. According to the center, Leonardo DiCaprio Helps Pull Out $2.6 Trillion in Fossil Fuel Investments. Leonardo DiCaprio has long since come out against big oil companies and their effect on the environment. Now in an influential display of force this past fall, DiCaprio and over 2,000 people and 400 institutions have pulled out their funds in fossil fuel companies, representing an extraordinary $2.6 trillion in investments.

Pulling out their investments, or divesting, is part of a global movement to divest funds from fossil fuel industries and invest instead in new climate solutions. According to DivestInvest.org, in only three years since its conception in 2014, more than $3.4 trillion in total assets have moved money out of “planet heating fossil fuels and into climate solutions” (download their full report for the whole text). In 1998, he created the Leonardo DiCaprio Foundation, whose mission statement is “dedicated to the long-term health and well-being of all Earth’s inhabitants”. Dobre Wiadomości. San Francisco's Official Response to the Election of Trump - San Francisco Bay Times. The San Francisco Board of Supervisors recently passed a resolution, introduced by Board President London Breed, in response to the election of Donald Trump. 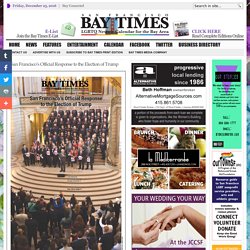 The resolution reads as follows: WHEREAS, On November 8, 2016, Donald Trump was elected to become the 45th President of the United States; now, therefore, be it RESOLVED, That no matter the threats made by President-elect Trump, San Francisco will remain a Sanctuary City. We will not turn our back on the men and women from other countries who help make this city great, and who represent over one third of our population. John D Liu- Ecosystem Restoration in a Time of Crisis. John D Liu is an American who has lived in China for more than 30 years. 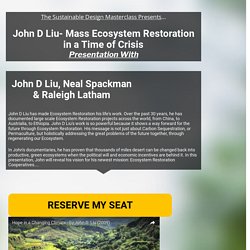 John has concentrated on ecological film making since the mid-1990’s, and has written, produced and directed films on Grasslands, Deserts, Wetlands, Oceans, Rivers, Urban Development, Atmosphere, Forests, Endangered Animals, and Poverty Reduction. Inhabitat - Green Design, Innovation, Architecture, Green Building. When you think of Detroit, ‘sustainable‘ and ‘agriculture‘ may not be the first two words that you think of. 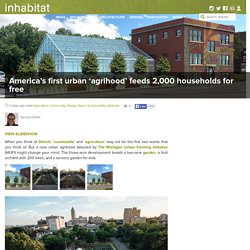 But a new urban agrihood debuted by The Michigan Urban Farming Initiative (MUFI) might change your mind. BBC News - Meet the fog catcher bringing water to the poor... De bygger över 50 små kolonistugor – för att hjälpa hemlösa    Female chief in Malawi breaks up 850 child marriages and sends girls back to school. Theresa Kachindamoto, the senior chief in the Dedza District of Central Malawi, wields power over close to 900,000 people… and she’s not afraid to use her authority to help the women and girls in her district. 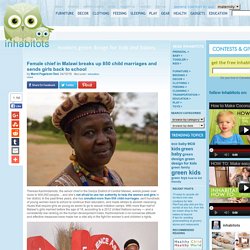 In the past three years, she has annulled more than 850 child marriages, sent hundreds of young women back to school to continue their education, and made strides to abolish cleansing rituals that require girls as young as seven to go to sexual initiation camps. With more than half of Malawi’s girls married before the age of 18, according to a 2012 United Nations survey — and a consistently low ranking on the human development index, Kachindamoto’s no-nonsense attitude and effective measures have made her a vital ally in the fight for women’s and children’s rights. Image © UN Women. 400 Companies That DO NOT Use GMOs in Their Products – REALfarmacy.com. All too often we rely on the state to tell us what to eat and which companies are ethical. 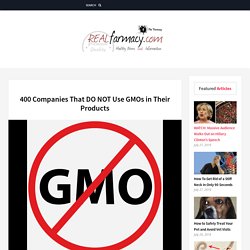 And all too often the companies that the state deems ethical and safe are proven to be quite the opposite. The giant agricultural companies that produce GMOs and use millions of tons of chemicals are able to do so because of monetary support. As long as we continue to purchase their products they will continue to pollute the environment and our bodies. You and I have the power to stop this madness. We can choose to support those companies that do not use GMOs.

These companies believe that their customers deserve to make an informed choice. Share: Comments. Something Extraordinary Is Happening in the World, And Most People Haven't Noticed. Most of us haven’t quite realized there is something extraordinary happening. 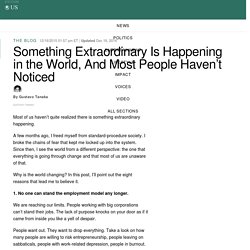 A few months ago, I freed myself from standard-procedure society. Home — Precious Plastic. Sweet victory for Mexico beekeepers as Monsanto loses GM permit. A small group of beekeepers in Mexico has inflicted a blow on biotech giant Monsanto, which has halted the company’s ambitions to plant thousands of hectares of soybeans genetically modified to resist the company’s pesticide Roundup. 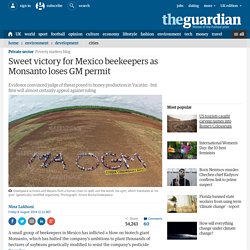 A district judge in the state of Yucatán last month overturned a permit issued to Monsanto by Mexico’s agriculture ministry, Sagarpa, and environmental protection agency, Semarnat, in June 2012 that allowed commercial planting of Roundup-ready soybeans. Monsanto Loses GMO Permit In Mexico – Judge Sides With The Bees. A number of countries around the world have now completely banned GM food and the pesticides that go with them, or have severe restrictions against them. This comes after the world has experienced a massive resistance against Monsanto and other biotech giants that manufacture GMOs and pesticides. It’s (the resistance) also a result of numerous studies that have emerged showing the environmental and health dangers that are associated with pesticides, as well as health dangers that could be associated with GMOs.

Soil Microbes And Human Health – Learn About The Natural Antidepressant In Soil. By Bonnie L. Grant Prozac may not be the only way to get rid of your serious blues. Soil microbes have been found to have similar effects on the brain and are without side effects and chemical dependency potential. Learn how to harness the natural antidepressant in soil and make yourself happier and healthier. These 60-And-Older Seniors Will Destroy Your Age Stereotypes. India Man Plants Forest Bigger Than Central Park to Save His Island. Bolivia Gives Legal Rights To The Earth. Law of Mother Earth sees Bolivia pilot new social and economic model based on protection of and respect for nature. Bolivia is to become the first country in the world to give nature comprehensive legal rights in an effort to halt climate change and the exploitation of the natural world, and to improve quality of life for the Bolivian people. Developed by grassroots social groups and agreed by politicians, the Law of Mother Earth recognises the rights of all living things, giving the natural world equal status to human beings.

Once fully approved, the legislation will provide the Earth with rights to: life and regeneration; biodiversity and freedom from genetic modification; pure water; clean air; naturally balanced systems; restoration from the effects of human activity; and freedom from contamination. The legislation is based on broader principles of living in harmony with the Earth and prioritising the “collective good.” Bolivia Rain forest The Law of Mother Earth includes the following: Forest Man. Looking for More Meaning in Your life? Then Be a Part of This Movement. Be a Part of This Story. A Seriously Bright Idea That's Giving An Amazing New Purpose To Something We Usually Throw Away. 10 Signs The Global Elite Are Losing Control. By Eric Blair, Costa Rica: Where Environmentalism and Tourism Live in Harmony. Growers Give Seeds To Libraries. Monsanto Charged With Crimes Against Nature and Humanity, Set to Stand Trial in 2016.