Repair cafe in Redcliffe joins international push for consumers' right to repair. It's Saturday morning on the picturesque Redcliffe Peninsula north of Brisbane, and Melissa Griffith's 15-year-old KitchenAid is making a "clicky sound". 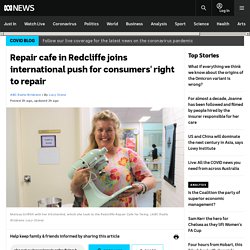 Key points: Repair Cafes are a community movement that helps consumers fix broken items rather than throwing them outThe Right to Repair movement is pushing for consumers to have better access to repairs for itemsA report by the Productivity Commission this week noted there were "significant and unnecessary" barriers to access many simple repairs The workhorse of Ms Griffith's kitchen, the appliance is now being frowned over by a volunteer at the Redcliffe Repair Cafe, a community program aiming to reduce how many items are tossed into landfill each year.

"There's something happening with the gears, but to get it repaired in Australia I'd have to send it down to Melbourne, or send it to England," she said. The verdict is in: her KitchenAid will need to be left with a volunteer for a few days for further investigations. Solar power prices are falling. What does this mean for our household electricity bills?

After a long decade of year-on-year increases in power prices throughout the country, the cost of electricity is forecast to fall in most places. 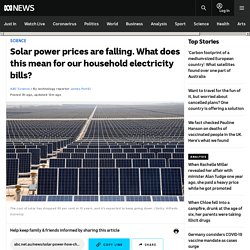 How far it falls — and how quickly — depends on lots of factors, but there's clear consensus that Australia is entering a new era in which power will be cheaper than it has ever been before. In two years, renewables have gone from economic "wrecking ball" to the technology that will unlock future green industries, with the Prime Minister recently setting a target of "ultra-low cost solar" by 2035. There's even talk in some quarters that solar could one day fulfil the unrealised promise of nuclear power to generate electricity so abundant that it would be "too cheap to meter". 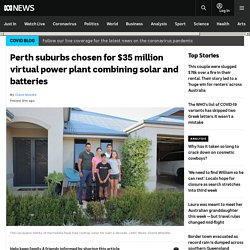 Key points: Project Symphony will look at how to harness excess solar energy500 households from Perth's south will be part of the power hubVirtual power plants are the future, WA's energy minister says About 500 households and businesses in Harrisdale and Piara Waters, in Perth's south-east, will be offered subsidised storage batteries or a credit on their power bills as an incentive to take part in the trial, which is being jointly funded by the West Australian and federal governments. It will be the country's latest virtual power plant (VPP) — a network of solar-powered homes that collectively generate and store energy, minimising the use of fossil fuels. 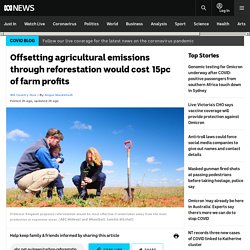 Key points: Offsetting agricultural emissions through reforestation would cost WA farms 15pc of their profits according to UWA researchFarmers' opposition would be a major obstacleThe study author said other strategies are more cost-effective than reforestation, particularly in pastoral areas In research published this week, University of Western Australia professor Ross Kingwell studied the obstacles and effectiveness of reforesting Western Australian farmland.

He found that offsetting the entire sector's carbon emissions would cut farm profits by an average of 15-per-cent and require between 8 and 11-per-cent of farmland to be forested. How regenerative farming is helping the Mornington Peninsula reach net zero emissions. When Mornington Peninsula viticulturist Joe Vaughan planted his vines in 1996 he approached farming as he would a battlefield. 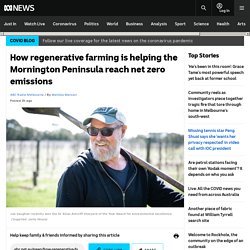 "It used to be like a war zone," he said. Each week he would deploy an arsenal of pesticides and herbicides on his Tuerong property to kill unwanted weeds and bugs. Twenty-five years on his approach has completely changed. By composting locally sourced green waste, manure and the grape solids leftover from winemaking, Mr Vaughan is putting nutrients back into the soil. Instead of just lawn around the vines, he is planting a variety of flowers and legumes between rows to attract insects and encourage biodiversity. Sydney waste research scientist Veena Sahajwalla awarded NSW Australian of the Year 2022. It was in the bazaars of Mumbai, India where a young Veena Sahajwalla first saw what was possible with other people's trash. 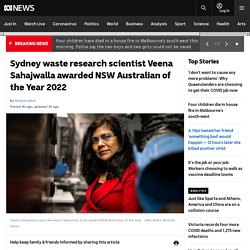 In the sticky heat, shopkeepers soldered and fixed broken circuit boards with scraps salvaged from landfill. The waste research scientist and engineer's home was informally serviced by "Kabadiwallahs" — scrap dealers who would go from house-to-house collecting recyclable materials for resale. When Professor Sahajwalla of UNSW accepted her award for the NSW Australian of the Year on Monday, she became emotional as her mind returned to these "waste warriors". 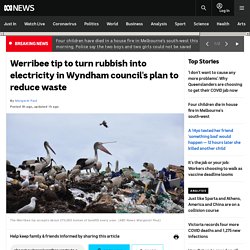 He gestures at the landfill heap that is growing even as he speaks, with a constant line of trucks dumping loads of household and business waste. "I think you can see it, can't you? " Mr Thorpe says. In among the dirty nappies and household rubbish are plenty of things that do not need to be there, including wood, green waste and what looks like a perfectly good bike. A few seconds later, the bike is crushed by the compactor that drives back and forward over the rubbish all day.

This $1m machine is making the most out of pig poo. Waste from intensive animal industries is usually seen as just that, waste. 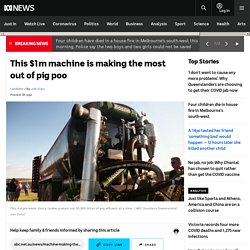 Key points: An imported machine pumps effluent below the soil as a natural fertiliserRecycling nutrients in animal waste is a key way to boost food productionSynthetic fertiliser prices are at record highs, so one pig farmer has sought a new approach An imported $1 million machine is unlocking the power of pig poo by pumping into the soil.

"There's really not a lot of downside to putting your manure into the ground," owner Mark Young said. It is a simple enough principle, but the technology involved is far from basic and is helping this farmer improve his soil and reduce his use of synthetic fertilisers. Recycling industry rubbishes Queensland's waste levy, saying targets will not be met. Queensland's recycling industry has rubbished the state's implementation of a waste levy, saying it is not on track to achieve state or national waste and recycling targets. 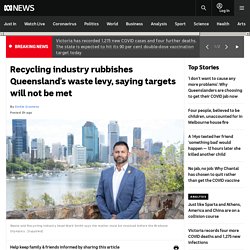 The waste levy was introduced in Queensland in mid-2019 with the aim of stemming a tide of commercial waste from interstateAt the time, the government promised there would be no impact on QueenslandersBut a waste industry report says the use of rebate payments is a major impediment to the levy's integrity Waste Recycling Industry Queensland (WRIQ) chief Mark Smith said the body conducted its own analysis ahead of an official review of the waste levy due by mid-2022.

Tasmania is pursuing 200pc renewable energy, but not everyone is sold on the path to get there. The wind is almost always blowing at Robbins Island, lying off Montagu on Tasmania's far north-west coast. 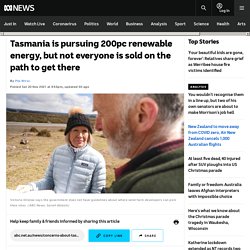 Key points: There are at least 12 new renewable energy projects on the planning table in TasmaniaSome community members say the state does not have a clear renewables strategySome people warn Tasmania could miss the opportunity to help Australia transition to a cleaner future Black wagyu cattle graze the island's green pastures, and the sound of frogs hidden in mud holes punctuate the air. The cattle may soon need to adapt to some changes in the landscape — the privately owned island is set to become home to a wind farm of up to 122 turbines. The project is one of three renewable energy farms in the pipeline for UPC-AC Renewables. Tasmania is pursuing 200pc renewable energy, but not everyone is sold on the path to get there. AACO goes green with methane reduction, sustainability improvements to cut emissions. With eyes on how Australia's livestock industry is going to cut emissions, the country's oldest and largest cattle company is getting ahead of the curve with plans to go green and boost animal welfare.

Key points: A major cattle company will trial a seaweed additive to reduce methane from Wagyu cattle in an industry firstAACo has launched five sustainability commitments including plans for animal welfare certificationThe Australian government has refused to sign up to a global commitment to reduce methane produced by cow burps In what it claims is an industry-first, Australian Agricultural Company (AACo) will trial feeding a methane-reducing additive found in seaweed to feedlot cattle for longer.

AACo will also establish a new fund to help turn climate science and research into "real world action", invest in new ways of measuring biodiversity and soil carbon on farms, and commit to creating a new certification standard for animal welfare. Wagyu seaweed trial. Predator-free sanctuary helps native wildlife thrive in Victoria's 'magical' Otways. Koalas feed among the tall trees and emus forage on the forest floor of a wildlife sanctuary in south-west Victoria conservationists hope will provide a greater insight into what the Otway Ranges were like before colonisation.

Key points: The sanctuary near Apollo Bay opened in March after more than two years of work on the former farming propertyA high predator-proof fence protects native marsupials, such as potoroos, from foxes and catsResearchers are learning more about the Otways' native plant life and hope to help re-establish certain species A fence, designed to be hidden, keeps feral predators such as cats and foxes out, and allows the bandicoots and potoroos within to thrive – just as they did more than two centuries ago. Alongside the small native mammals, rare and endangered flora, such as the tall astelia, are also mounting a comeback. Calls to better protect wild sandalwood amid fears of extinction.

As a young man, Badimia elder Ashley Bell made money from harvesting sandalwood, but now he's so concerned about the sustainability of wild sandalwood he's calling for a ban on removing it from his traditional lands. Key points: Sandalwood has been shipped out of Western Australia since 1844There are calls for greater conservation of wild sandalwood treesThe plantation industry says it is ready to fill the sandalwood market with its trees. Berrybank Farm piggery in central Victoria cashing in on going green. Piggeries may not have a reputation for being lean and green, but some pig farmers have been cashing in on climate action for decades. Key points: The Australian pork industry says it has reduced emissions by 69 per cent since 1980 and reduced water usage by about 80 per centA central Victorian piggery has been investing in animal-waste-to-energy technology since the 1980sLeftover effluent from Berrybank Farm's bio-digester is re-purposed as a nutrient-rich fertiliser product Jock Charles, who runs Berrybank Farm, north-west of Ballarat, said his pig farm started investing in waste-to-energy technology 30 years ago.

A renewable energy revolution is powering Australia's $720bn mining and resources industry. E-bikes surge as Perth’s transport network lags and traffic swells. New Delhi to close schools, construction sites due to heavy air pollution. E-bikes surge as Perth’s transport network lags and traffic swells. Scientists create new type of eco-glitter made from biodegradable, sustainable materials. Car makers say lack of emissions regulations putting handbrake on electric vehicles in Australia. Tourism pressure mounts on Tasmanian government to end native forest logging. Which car brands are going all electric and when? Orica's Newcastle plant to slash greenhouse gas emissions with new technology. How passive solar ideas inspired a 1950s builder ahead of his time. 'Community energy' may be the answer to regional prosperity under 'net zero'. This town wants to give it a go. Technology set to redesign the future of food as agriculture moves towards net zero. Yarra Ranges forest the size of 94 MCGs donated to conservation.

360 Dust Analysis - VegeSafe and DustSafe. Citizen Science. Deep in the Daintree, this couple joins tree changers switching to off-grid living. States and territories revolt over federal government's coal power subsidy plan. After paying $600 for her own kitchen composting system, Madison hopes Australia lifts its FOGO bin game. The world is hungry for solar panels. Why did we stop making them? Hopes a new eco-friendly concrete can rise from the ashes of coal power. Daylight saving was introduced in WWI to save fuel. Does it still reduce electricity consumption and costs? Batteries of the future set to be cheaper and better — just by adding sugar. Worth more than woodchips? Finding another future for Tasmania's eucalyptus nitens.