Breakdown of raw materials in Tesla’s batteries and possible bottlenecks. Because of its name, lithium-ion (li-ion), people think that li-ion batteries are primarily made of lithium and that if we transition the world’s car fleet to electric, it will create a supply problem. 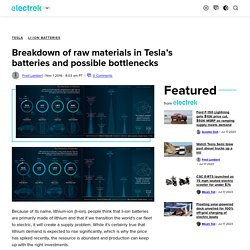 While it’s certainly true that lithium demand is expected to rise significantly, which is why the price has spiked recently, the resource is abundant and production can keep up with the right investments. But it would be a mistake to focus only on lithium. There are several other raw materials in batteries and they each can create bottlenecks if not properly addressed. We will look at an example with a Tesla Model S battery pack through an infographic embedded below. Tesla has been signing supply contracts with a few potential new lithium sources and even reportedly tried to purchase a lithium startup. It is estimated that there’s about 63 kg of lithium in a 70 kWh Tesla Model S battery pack, which weighs over 1,000 lbs (~453 kg). FTC: We use income earning auto affiliate links. James Bond Aston Martin DB5 sold at auction for £5.2m. An Aston Martin DB5 used to promote the James Bond film Thunderball has sold for $6.4m (£5.2m) at the world’s biggest classic car auction in California. 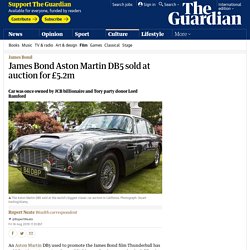 The car, which was once owned by the British JCB billionaire and Tory party donor Lord Bamford, exceeded its auction estimate and became the world’s most expensive DB5. Barney Ruprecht, of the auctioneer RM Sotheby’s, said: “We are beyond thrilled … and proud to have set a new record for the most valuable DB5 sold at auction. Beyond this new auction record, the enormous amount of interest in the car and excitement surrounding it ahead of the auction solidifies its status as the ‘most famous car in the world’, along with the collector car hobby’s great respect for the Aston Martin brand.”

The DB5 was one of the star lots at the Monterey Car Week, which is expected to generate sales in excess of $380m. More than 100 cars are expected to sell for more than $1m each. After Tesla's rise, the "Best Worst EV Denial" award in legacy auto goes to... Bet everything on electric: Inside Volkswagen's radical strategy shift. About Us - Aussie Drink Drive. Aussie Drink Drive recognises that alcohol is widely used in the Australian community and that misusing alcohol can lead to social and health harms, both to the drinker and to others. 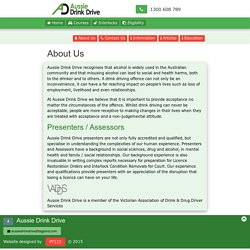 A drink driving offence can not only be an inconvenience, it can have a far reaching impact on people’s lives such as loss of employment, livelihood and even relationships. At Aussie Drink Drive we believe that it is important to provide acceptance no matter the circumstances of the offence. Whilst drink driving can never be acceptable, people are more receptive to making changes in their lives when they are treated with acceptance and a non-judgemental attitude. Presenters / Assessors Aussie Drink Drive presenters are not only fully accredited and qualified, but specialise in understanding the complexities of our human experience. 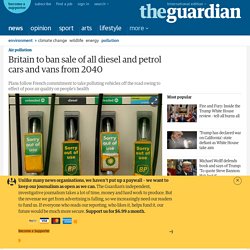 The commitment, which follows a similar pledge in France, is part of the government’s much-anticipated clean air plan, which has been at the heart of a protracted high court legal battle. The government warned that the move, which will also take in hybrid vehicles, was needed because of the unnecessary and avoidable impact that poor air quality was having on people’s health. Ministers believe it poses the largest environmental risk to public health in the UK, costing up to £2.7bn in lost productivity in one recent year.

Ministers have been urged to introduce charges for vehicles to enter a series of “clean air zones” (CAZ). However, the government only wants taxes to be considered as a last resort, fearing a backlash against any move that punishes motorists. A City Hall source was sceptical about the government’s announcement. Home - SaabWorld. FIXD Automotive – Understand Your Car.