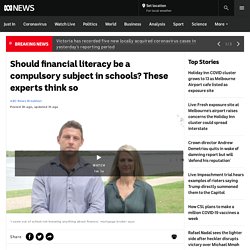 It's a straightforward question with a contentious history and no consensus on an answer. Yet as states and territories begin to phase out school banking programs (think Dollarmites), some experts are saying there needs to be a dedicated model to teach our youth just how to handle their money. English, science ... personal finance? For Jai and Marlies Hobbs, the problem is clear: Australians, particularly kids, don't understand the fundamentals of money. Jai is a mortgage broker and Marlies is a former property development lawyer. Together, they have started and run multiple businesses and have two kids. New year's resolution: Is it time to get a financial coach? What were your new year's resolutions? 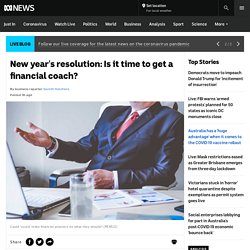 Research regularly shows one of the most common resolutions people make is money related. Every summer we think — okay, in January I'll get serious about saving and getting my finances in order. But most of us abandon our goals by mid-February. ETFs are popular with younger investors. So, what are exchange traded funds all about? - ABC News. For some, a new year (and new resolutions) means finally getting around to investing in the stock market. 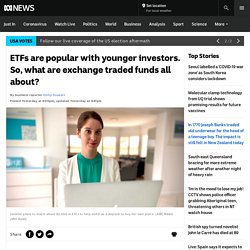 A popular choice for many first-time investors is a type of investment called exchange traded funds (or ETFs). But all the jargon can be confusing. So, many readers have written to us asking us to explain exactly what ETFs are. Here's the lowdown. Federal Government to assess superannuation, housing policy after Retirement Income Review - ABC News. Australians could be encouraged by the Federal Government to draw down on their superannuation balances and use equity in the family home to fund their retirement, rather than rely on increases in compulsory super contributions. 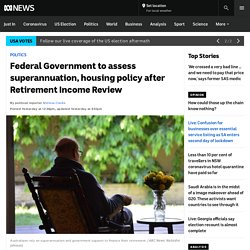 Key points: The review was delivered to the Government in July but will be released publicly on FridayParts of it focus on the potential negative effective a compulsory super contribution increase could have on wagesTreasurer Josh Frydenberg says the report "reaffirms the need to simplify and enhance the efficiency of the superannuation system" The Coalition is considering the findings of the wide-ranging Retirement Income Review, which was compiled by former senior Treasury Department official Michael Callaghan and covered the age pension, compulsory superannuation and voluntary savings.

The review was handed to the Federal Government in July and is set to be publicly released by Treasurer Josh Frydenberg on Friday. Financial counsellors urge people to seek assistance ahead of JobSeeker, loan deferrals coming to an end - ABC News. During the worst recession Australia has seen in almost 100 years, you would think financial counsellors would be bombarded with calls. 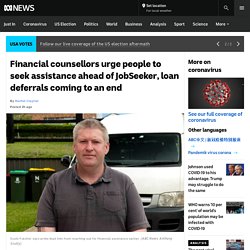 You'd be wrong. Despite the sharp economic downturn from the coronavirus pandemic, the phones are quiet. Financial counselling services are trying to encourage people across the country, especially in Victoria, to get ahead of the ball and reach out for help before cuts to JobKeeper and JobSeeker take effect and moratoriums on evictions and rent deferrals end. The Federal Government is considering extending the JobSeeker supplement into next year but has made no announcements.

The Salvation Army's Moneycare team and the National Debt Helpline, managed by Financial Counselling Australia, have both told ABC News they are experiencing a decline in calls compared with last year. Financial Counselling Australia director of community engagement Maura Angle said the trend was worrying. Coronavirus crisis sparks calls for financial literacy to be taught as a subject in Australian high schools - ABC News.

Budgeting won't cure my sick dog, but it's made things a lot easier. Posted about 6 hours agoTue 3 Mar 2020, 8:01pm I've found myself weeping a lot this week. 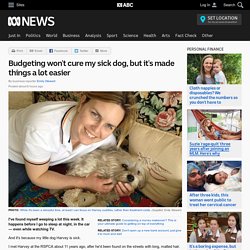 It happens before I go to sleep at night, in the car — even while watching TV. And it's because my little dog Harvey is sick. I met Harvey at the RSPCA about 11 years ago, after he'd been found on the streets with long, matted hair. Need to stop spending? Try giving money to your parents instead of taking it from them. Updated 51 minutes agoTue 7 Jan 2020, 10:42pm You've probably clicked on articles like this before. 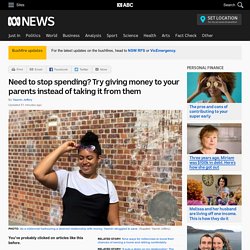 The headline might read: "How this millennial managed to save $1 million in a year". And you can almost picture the exclamation marks, can't you? "Follow these steps exactly and you'll be saying goodbye to your 9-5 in no time! " "Swap your avocado toast for a diet consisting solely of beans and noodles, or something similarly tasteless for the next five years. Budgeting for 2020? This is your ultimate guide to getting on top of everything. 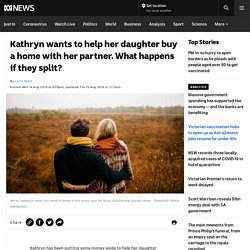 "My daughter is in a relationship and they are considering buying a house in future, and will use the money I put aside for part of her home deposit," she told the ABC. Australia called to reassess ties to Cambodian microfinance amid reports of child labour, debt bondage. Posted about an hour agoSat 10 Aug 2019, 10:32pm The sleeve of Srey Pheak's pink-striped T-shirt hangs loose from where her right arm used to be. 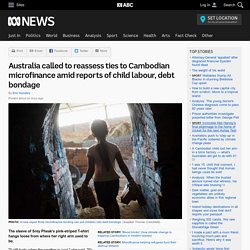 Key points: A new report alleges microfinance institutions have led to serious human rights abusesThe Collateral Damage report links Australian aid to Cambodia's microfinance sectorMicrofinance proponents maintain that when "done well" the sector reduces poverty "It still hurts when the weather is cool," she said. Remote Australians are discovering they are richer by hundreds of thousands of dollars than they realised. Posted about 2 hours agoFri 19 Jul 2019, 10:30pm Imagine wandering into a park and discovering you are $100,000 richer than you realised. 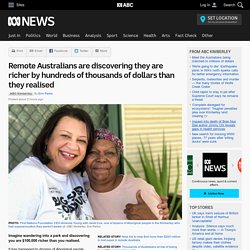 Credit card debt trap increasingly catching older Australians. Posted yesterday at 10:28amMon 15 Jul 2019, 10:28am Manfred Kohl is one of 1.9 million Australians who are struggling with credit card debt. Key points: The Salvation Army's financial counselling service reports more people aged 55 and older are asking for helpASIC says 1.9 million Australians have problematic credit card debt Australia has one of the highest levels of household debt in the world The 59-year-old was forced into debt when his partner fell ill and had to stop working, which halved the family income.

He started using a credit card and took out a personal loan, and now owes $48,000 which he has no capacity to repay. He is just one of a growing number of elderly Australians finding themselves caught in a credit card debt trap. 'He could check everything I bought': This is what financial abuse looks like. If there's one thing you should do by the end of this week, it's check your super.

Updated 38 minutes agoTue 25 Jun 2019, 10:50pm Are you the sort of person who feverishly checks their super balance and keeps across what's happening with their account? If that's you, bravo. But for the rest of us, you need to know about some big super changes that were passed through parliament earlier this year and come into effect on July 1. The changes have been made so that super accounts with low balances are not eroded by insurance premiums and fees. But it could disadvantage those taking a break from work, working in a contract role or running their own business, or those working overseas.

And while your super fund should have contacted you about the changes, apparently more than a third of Australians never open any emails or letters from their fund. "We know that for the younger cohort of people — 18–34, that rises to 52 per cent," Australian Super Fund Association strategy and experience general manage Katrina Horrobin said. Can't decide between a car or a house? These are some other financial goals to consider. If you're just entering the workplace or have been working for a couple of years, it can be tough to know what you should be doing as you start to see the paycheques coming in. Of course, spending it all on an overseas holiday or on a one-off purchase is pretty tempting, so we've asked the experts what are some responsible alternatives.

It follows a number of people writing into the ABC Personal Finance project asking us about investing while they are young. Sarah Parkinson was one of them, asking: "should I start buying shares now, or wait until I have bought a house first? I'm assuming here that a house is as good an investment. Is it? " So we've had a look at investing in shares and other investment options you could consider, depending on your own personal situation and risk appetite. AFL match stoush leads to arrest of 30 people in isolated NT community. Posted yesterday at 3:40amWed 19 Jun 2019, 3:40am A fight between families at an AFL game in Darwin has led to 30 people being arrested in the isolated and at times troubled community of Wadeye, police say.

Key points: Of the 30 people arrested in Wadeye, 26 have been remanded in custody and transported to Holtze prison in DarwinA legal team who had travelled to the community to hold court sessions left early due to the unrestNT Police said they would soon begin mediation to attempt get to the root of the problems The Northern Territory community, about 250 kilometres south-west of Darwin, has long been stricken by sporadic outbursts of violence, often related to long-term family disputes in the area.

Last week the community once again erupted, with NT Police alleging offenders were armed with "serious weapons through the community" during the unrest. No significant injuries were recorded. "Most of them were [allegedly] the main instigators of the issues out there. " Legal team evacuated. 'Charging like wounded bulls': Calls for greater transparency in the funeral industry to protect vulnerable customers. ADHD can make it harder to manage your money. Here's some tips to help. By Sterre Meijer.

Don't know where to start when it comes to shares? Here's what you need know. Updated about 3 hours agoThu 23 May 2019, 8:36pm When you think of the stock market, do you feel bamboozled by the jargon? Why you can still be charged double for consumer goods, years after Government pledged crackdown. Updated 28 minutes agoWed 8 May 2019, 1:04am Advocates are angry vulnerable Australians are still being "harmed" by payday loans and high-cost appliance contracts, years after the Federal Government promised to crack down on the practice. 'Do something you're going to stick to': Here are three different methods of budgeting. Remember Dollarmites? Now teachers want big banks out of their schools. Posted about an hour agoTue 19 Feb 2019, 8:09pm Teachers are demanding the Federal Government bar the big banks from marketing to children inside schools under the guise of financial literacy education.

With a 'good income', monthly savings and no credit cards, Renee's bank still knocked her back. Robin's fixing bad money habits, and wants us all to learn a lesson in personal finance. The Aboriginal women who fought homelessness and stereotypes to take control of their money. Updated 19 minutes agoSat 16 Mar 2019, 11:42pm.