Economics theory. We should thank the unemployed for their service. They've been used to control inflation. I want to show you something. 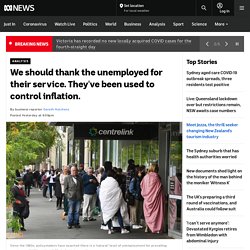 It has to do with our economy and it's probably been invisible to you. The majority of journalists have no idea about it and few politicians would, either. But it affects everyone and it shouldn't be something only economists know about. Who controls the levers? In this era of coronavirus lockdowns, we've learned a lot about our economic policy settings. For example, we've learned widespread poverty is a policy choice in Australia. Governments have the power to lift hundreds of thousands of households out of poverty if they want to. The federal government did it last year, when it increased unemployment payments during the initial lockdowns.

That situation lasted a few months. But then it let those families fall back into poverty by taking those special payments away again, as the graph below shows. Current account surplus gives Australian economy breathing room, says Bank of America. For those old enough to remember it, or who study economic history, the phrase "banana republic" is synonymous with 1980s Australia and then treasurer Paul Keating. 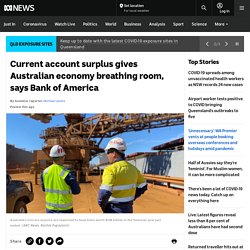 His "banana republic" comments were triggered by the nation's current account balance. This ABS figure essentially measures how much money is flowing out of Australia (in the form of imports, interest payments and dividends to foreign shareholders) versus how much is coming in. Back in the 1980s, the prices of Australia's biggest commodity exports languished while the cost and quantity of imports rose.

What our politicians could learn about poverty from the first-hand experiences of economist Alfred Marshall. The top five things this leading economist thinks will happen in 2021. Saying the year 2020 wasn't a great one for the economy is a bit of an understatement. 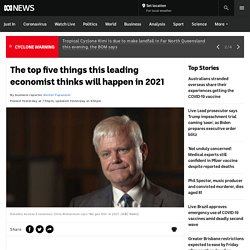 Shops shuttered, businesses were forced to close or, worse, go bust, and unemployment hit 1 million people as sectors like hospitality and tourism were decimated. But economist Chris Richardson, from Deloitte Access Economics, is upbeat about 2021 — so much so, his business outlook for the year is: "We got this. " He expects Australia will see some important recovery this year provided vaccines start to be administered in Australia from next month, state borders remain mostly open and virus numbers remain suppressed.

So what are his key predictions? Flying will resume, bringing students and tourists. Doughnut economics may have the answer to the dilemma between environment and economic growth. Before the recession we were on a collision course with environmental disaster. 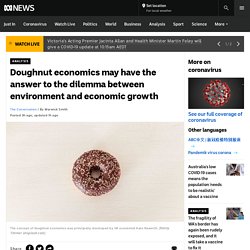 The recovery provides a rare opportunity to do things differently; to rebuild a better economy that can support living standards without irretrievably damaging the environment.

Retail. Shareholders win out over workers from corporate revenue windfall. Posted about 4 hours agoTue 12 Mar 2019, 7:38pm There will always be tension between workers and investors over who gets a greater share of the profit pie. 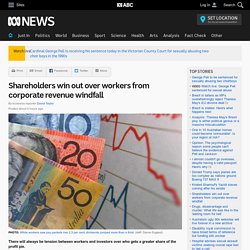 Key points: Dividends to shareholders increased by around a third over the past year, while wages rose 2.3 per centThe Reserve Bank has called for greater productivity growth to boost wagesBusiness groups say higher wage rises could lead to fewer jobs Business groups have expressed concern after Labor said it would consider boosting the minimum wage to a "living wage" should it win the next election. Households' living standards are still falling as GDP per capita heads for a recession.

Analysis Updated 3 minutes agoSun 3 Mar 2019, 12:49am If there is one big thing that is keeping the economy from officially going backwards, it is population growth. 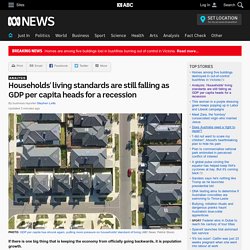 The week in finance:

Perth's rental market is surging, but a 'dampening blanket' lies over a wider housing recovery. Updated Fri at 1:49amFri 1 Feb 2019, 1:49am As property analysts debate whether Perth's housing downturn has reached its nadir, one part of the market is staging a quiet recovery. 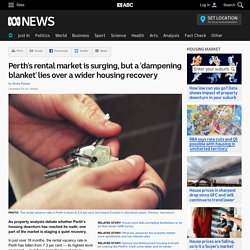 Key points: A big drop in Perth's rental vacancy rate has surprised some prospective tenantsPerth's median rent last quarter was $350 per week, near its level of a decade agoTightened lending by the banks could limit further property gains, analysts say In just over 18 months, the rental vacancy rate in Perth has fallen from 7.3 per cent — its highest level on record — to 2.8 per cent, the lowest rate in almost six years. Australia's rich keep getting richer, with billionaires' wealth rising $160b in one year, says Oxfam. Updated about an hour agoTue 22 Jan 2019, 12:01am Australia's rich keep getting richer, with the top 1 per cent of Australians owning more wealth than the bottom 70 per cent combined. 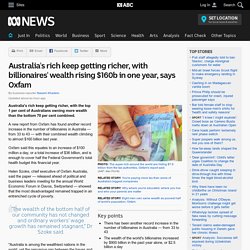 Key points There has been another record increase in the number of billionaires in Australia — from 33 to 43The wealth of the world's billionaires increased by $900 billion in the past year alone, or $2.5 billion a dayOxfam wants the tax man to require companies to give detailed public reports about their tax affairs by country, and reinstate a women's budget A new report from Oxfam has found another record increase in the number of billionaires in Australia — from 33 to 43 — with their combined wealth climbing to almost $160 billion last year. Oxfam said this equates to an increase of $100 million a day, or a total increase of $36 billion, and is enough to cover half the Federal Government's total health budget this financial year. Darwin pub staff allegedly told to ban 'blacks' and charge Aboriginal customers for water. Updated about an hour agoMon 21 Jan 2019, 11:25pm The owner of a well-known Darwin nightspot is facing claims he instructed staff to bar Indigenous people from his premises and that he owes thousands of dollars in unpaid wages to his employees. 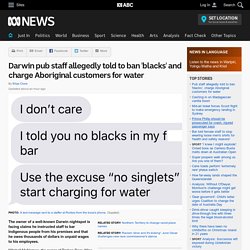 Key points: Staff of Rorkes Beer Wine and Food have made claims about being owed thousands and racist treatment of Indigenous patronsSeveral staff have lodged complaints with the Fair Work commissionThe bar has been closed for days and the ABC understands 15 staff members have taken part in a mass walk-out Mitchell McNamee, the owner of Rorkes Beer, Wine and Food, in central Darwin, allegedly wrote to a senior staffer saying, "I told you no blacks in my f***ing bar". Hilton hotel chain among businesses cashing in on taxpayer-funded grants. Updated Wed at 2:29amWed 12 Dec 2018, 2:29am The Northern Territory Government is handing out $3 million of taxpayers' money to businesses including five-star hotel chains and luxury waterfront restaurants. 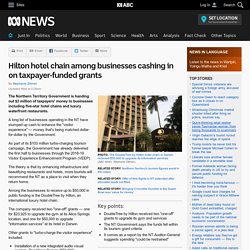 Key points: Top 10 small business ideas to inspire you. Dog walking or pet sitting It may seem like a trivial idea, but dog walking can turn into a lucrative business opportunity! You can start with the basics, before expanding into additional services such as home visits and even doggie adventures.

The region is known as a 'black hole' for weather data because it relies on weather stations interstate and hundreds of kilometres north in Mildura, and farmers say the data is virtually redundant. RBA increasingly confident on economic growth, but still wary on household income and debt. Updated earlier today at 3:29amFri 9 Nov 2018, 3:29am Official interest rates look set to remain on hold as the Reserve Bank waits for the jobless rate to ebb further and inflation to move higher. Key points: RBA now sees unemployment rate below 5pc in 2020 and has edged up GDP forecastHousehold debt and low wage growth remain key concernsOfficial interest rate likely to be on hold through next year In its quarterly statement on monetary policy released this morning, the central bank signalled it would cling to the record-low cash rate setting of 1.5 per cent despite saying the economy was "performing well".

"If that progress is made, higher interest rates are likely to be appropriate at some point," the statement said. "However, given the expected gradual nature of that progress, the board does not see a strong case to adjust the cash rate in the near term. " Cherry growers expect largest crop in Australia's history as export demand soars to new highs - ABC Rural - ABC News.