Lion on a Wood (Simba) by cncmodels4you. I also made one of those acoustic levitators : 3Dprinting. Apples fresh from printer! Handing these out as year end thank you presents to my son’s teachers. (thing:289505) : 3Dprinting. Another timelapse of thermochromic filament printing: Dark Phoenix : 3Dprinting. AMOLEN 3D Drucker Filament, Tri Temperatur Farbwechsel: Amazon.de: Elektronik. 30cm axle for Triple gear by henryseg. DIY 3d Scan of a revolver handle for reproduction with a 3d printer : 3Dprinting. Image to Lithophane. Groupe public UltiBots Printers. Not sure which adhesive works best for your 3D print? Neither did we, so we put 9 adhesives to the test on our industrial tensile tester. Check out the results! : 3Dprinting. Flying Tourbillon Model 1.5 by A26. My favourite 3D Print ever. Just look at this : 3Dprinting.

Here is the advantage of 3D printing. You don’t need to worry about crashing. You know there is a little factory constantly producing frames in your home. : 3Dprinting. Hero Me Gen2 - OEM & 5015 Fans - Ender 3, CR-10 by mediaman. MAJOR Hero Me Gen 2 Update! 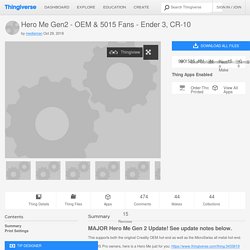 See update notes below. This supports both the original Creality OEM hot-end as well as the MicroSwiss all metal hot-end. CR-10S Pro owners, here is a Hero Me just for you: If you're looking for a cooling duct and mount for a E3D V6 or Volcano hot-ends, check out my Hero Me Gen 2 for E3D V6 here: and Hero Me E3D V6 Volcano here: In addition to updated single 5015 and OEM 4010 fan ducts, I modified Kelokera's ducts to support dual 5015 fans. There are three parts cooling ducts to choose from: OEM 4010 fan, Single 5015 fan and Dual 5015 fan mount. The dual 5015 fan ducts are configured to have each fan cool one side of the part. For mounting this system reuses existing screws from the stock setup, depending on your choices, you may need additional nuts and bolts (see mounting instructions below). Added photos of sample prints to show what is possible when you have your printer reasonably dialed in. Thats it. WE-R2.4 Six-Axis Robot Arm by LoboCNC.

I wanted tracks for my 1:10 scale rc to drive in snow, took a little longer than expected but I finished it today... : 3Dprinting. Printed a low-poly mask in transparent PLA and put a LED matrix behind it. Here's my progress so far. : 3Dprinting. Mostly 3D Printed Tank Design (Work in Progress) : 3Dprinting. A Computational Design Tool for Compliant Mechanisms (moving parts made all-in-one without hinges etc) : AdditiveManufacturing. A Falcon Heavy lamp I printed for a friend - STL in comments (: : 3Dprinting. 3D printed bearing assembly machine. Figured some of you might enjoy an example of an industrial application put to use. All of the white plastics are printed parts and made of Taulmans Alloy910 Nylon, printed everything on our Fusion F400S 3D printer. Bt. 3D Printing Supplies. 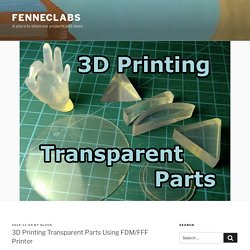 While there are plenty of transparent filaments sold on the market, they typically do not produce transparent prints, but rather translucent ones. The difference between transparency and translucency is in the material’s ability to diffuse light. Diffusion may result from several factors, the most dominant one in our case is the inhomogeneity of the print. Under normal settings, the printer leaves small cavities (bubbles) inside the print. Each cavity acts as a small lens (as it is curved) and scatters the light passing through, obscuring any image standing behind the print and making it… translucent! Having in mind that the plastic itself had no inherent constraints keeping it away from becoming the desirable transparent prints, other than the bubbles, I began searching for the right print setting to accomplish the task.

I give you the Winged Victory of Samothrace in copper : 3Dprinting. 3D Printing art work: Girl and Fish : 3Dprinting. Homemade Optical Table. In article 1... 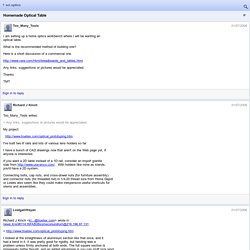 @news.doubleSlash.org>, Kai-Martin <k... @familieknaak.de> wrote: > Adding mass won't help to decouple from vibration of the environment. More> mass will lower resonance frequencies, but it will need stiffer support> which will raise resonance frequencies again. Consequently commercial> optical tables are not that massive. Can't follow up to alt. lasers -- not in Stanford news server (maybe someone else can). Validating Isotropy in SLA 3D Printing. Oct. 12, 2016 in News There are many aspects to consider when preparing an object for 3D printing. Among them is the orientation of the object on the build platform: Is there enough surface area to adhere sufficiently, are unsupported overhangs minimized, and is there enough clearance between objects? On top of all these considerations, there is yet another if the part is intended to withstand any significant amounts of stress: anisotropy.

Anisotropy, in this context, is defined as having physical properties that vary with respect to direction. Adding Screw Threads to 3D Printed Parts. In Downloads , Tutorials At Formlabs, we design lots of functional parts for printing on the Form 2 (our stereolithography, or SLA, 3D printer). 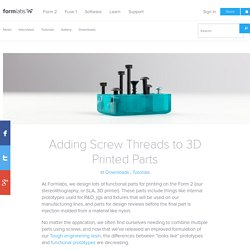 These parts include things like internal prototypes used for R&D, jigs and fixtures that will be used on our manufacturing lines, and parts for design reviews before the final part is injection molded from a material like nylon. No matter the application, we often find ourselves needing to combine multiple parts using screws, and now that we’ve released an improved formulation of our Tough engineering resin, the differences between “looks like” prototypes and functional prototypes are decreasing. This article is a guide to using screws in 3D printed SLA parts. There are many other ways to attach multiple 3D printed parts together, but if you need to repeatedly attach and detach components and want robust mechanical fastening, there's no real replacement for genuine metal threads. 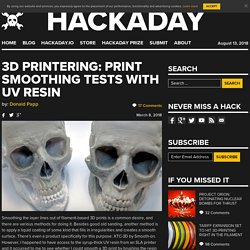 Besides good old sanding, another method is to apply a liquid coating of some kind that fills in irregularities and creates a smooth surface. There’s even a product specifically for this purpose: XTC-3D by Smooth-on. However, I happened to have access to the syrup-thick UV resin from an SLA printer and it occurred to me to see whether I could smooth a 3D print by brushing the resin on, then curing it.

I didn’t see any reason it shouldn’t work, and it might even bring its own advantages. Filament printers and resin-based printers don’t normally have anything to do with one another, but since I had access to both I decided to cross the streams a little. The UV-curable resin I tested is Clear Standard resin from a Formlabs printer. Mouth Operated Mouse by 0_o. About This project was intended to prove if it is possible to build a pointing device (mouse) for people with disabilities for under 20 USD, using only components which are widely available as well as a 3D printer. 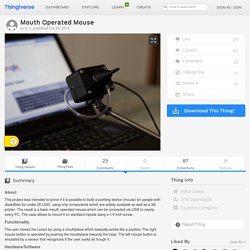 The result is a basic mouth operated mouse which can be connected via USB to nearly every PC. The case allows to mount it on standard tripods using a 1/4 inch screw. Functionality The user moves the cursor by using a mouthpiece which basically works like a joystick. Hardware/Software. Acrylic glue works really well with polishing PLA plastic□ : 3Dprinting. [Daily Maker] Black SLS nylon is awesome□ the surface is even smoother than white nylon. Also save the time and efforts for dyeing. : 3Dprinting. Very delicate work. : mechanical_gifs. 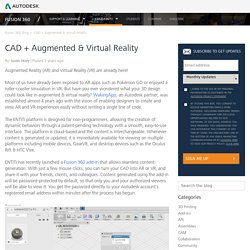 Learnt a lot from printing this over 2 weeks! : 3Dprinting. Pineapple Lithophane Lamp : 3Dprinting. Robotic cuttlefish autonomously scuttles through pipes. It was just back in March that German electrical automation company Festo unveiled two of its latest robots inspired by animals – a crawling/rolling spider and a flying fox bat. 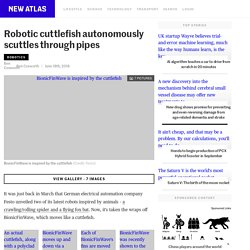 Now, it's taken the wraps off BionicFinWave, which moves like a cuttlefish. Along with the polyclad marine flatworm, which was another inspiration for the robot, the actual cuttlefish moves forwards and backwards through the water via two continuously-undulating fins that run along both sides of its body. The largely 3D-printed BionicFinWave is equipped with two such fins of its own, although they're made out of highly-flexible silicone. Each fin is moved by nine integrated lever arms, which are connected via a flat crankshaft to one of two servo motors housed within the robot. Those motors operate independently of one another – this lets the two fins undulate at different speeds and in opposite directions, allowing the robot to turn left or right on the spot.

A diorama of the history of spaceflight (to scale) I made for my U.S. History final project : 3Dprinting. 3D modeling Hydrographic Printing : 3Dprinting. Why print only infill? : 3Dprinting. PSA : Disable "connect infill lines" in Cura : 3Dprinting. Everything about nozzles with a different diameter - new video from Prusa : 3Dprinting. When you get a lack box and think"yeah this is going to be easy" but realize you want to print ultem1010... : 3Dprinting. 5 3D Printing Mistakes you WILL make - and how to avoid them! 3D Printing 101. 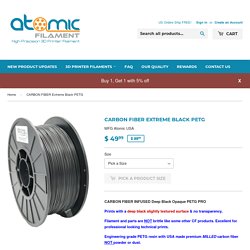