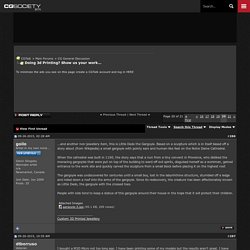 Wow, its been a while since I posted here, time flies. I'm a ten year veteran of the game industry, working as a generalist 2d/3d artist. For the last 10 years though, I have been working on modular, 3d printable human powered exo-frames. Inspired by the already impressive human frame, my exoskeleton design follows as closely as possible human mechanics and locomotion. But when you get right down to it, I have designed fancy pogo sticks you can wear.

My first working prototype has just rolled off the assembly line, (my 1000 dollar printer.) Medium term objectives include full leg versions and athlete performance testing by this spring if I can get funding, and full body suit by 2017. You can check out the promo video here; Website with general info and images; Thanks for looking, please ask away should you have any questions! Charlotte Steampunk Manufacture. How to Sand and Paint 3D Printed Parts. Posted at 08:13h in Blog by Luke Taylor Taking Printed Parts The Extra Mile 3D printing has changed the way we would traditionally manufacture. 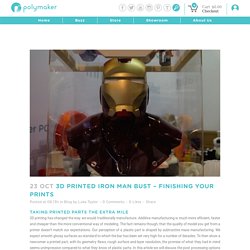 Additive manufacturing is much more efficient, faster and cheaper than the more conventional way of modeling. The fact remains though, that the quality of model you get from a printer doesn’t match our expectations. Grogbro on Shapeways. LittleRP.com. Twenty Something Sullivan. TWENTY SOMETHING SULLIVAN Architectural Ornament 1881 – 1885 by Tom Burtonwood and Tim Samuelson Louis H. 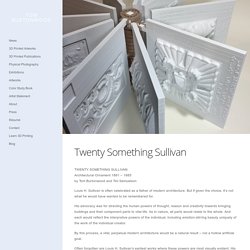 Sullivan is often celebrated as a father of modern architecture. But if given the choice, it’s not what he would have wanted to be remembered for. His advocacy was for directing the human powers of thought, reason and creativity towards bringing buildings and their component parts to vital life. As in nature, all parts would relate to the whole. Customizable fantasy miniatures 3D printed. ZEISS VR One. 3D Filaments - WYZ works. Fan Art: 3D Printed Doctor Who Cyberman Helmet - Page 4. @Quade: I just find it easier to detach the prints from the supports rather then the raft or directly on the build plate. 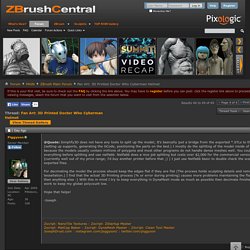 The supports Simplify3D creates pop off really easy. If I print directly or the build plate or raft I occasionally end up with stuck prints that requires tools to remove (and everytime I break out a dental tool to work on a print 90% of the time I end up stabbing myself in the hand somehow :) )Here are some more images on the Traditional Processes; more to come! 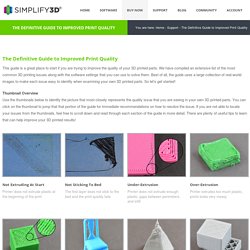 We have compiled an extensive list of the most common 3D printing issues along with the software settings that you can use to solve them. Best of all, the guide uses a large collection of real-world images to make each issue easy to identify when examining your own 3D printed parts. So let’s get started! Thumbnail Overview Use the thumbnails below to identify the picture that most closely represents the quality issue that you are seeing in your own 3D printed parts. List View Each issue will now be listed one-by-one with details about what causes the problem and instructions for troubleshooting it. A Guide to High Quality 3D Prints. This is NOT a guide for those who are new at 3D printing! 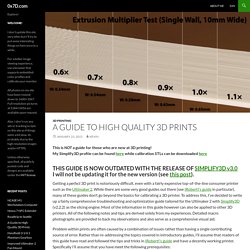 My Simplify3D profile can be found here while calibration STLs can be downloaded here THIS GUIDE IS NOW OUTDATED WITH THE RELEASE OF SIMPLIFY3D v3.0 I will not be updating it for the new version (see this post). Gr5 store - united states reseller of 3dsolex parts for ultimaker2 including olsson block, nozzles, teflon isolators, nozzles and more. Fbrc8 llc — Ultimaker 2 Spare Parts. Untitled. CubeForme. CubeForme operates with the fundamental purpose of elevating and spreading the ingenuity of 3D printing throughout the world. 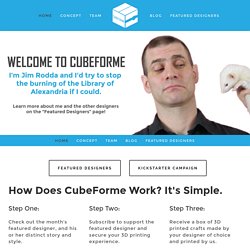 Following this purpose, we have two primary objectives: providing a fun, easy way for anyone to enjoy 3D printing and giving 3D designers a way to get the publicity that they deserve. Each box we ship out holds an immersive experience that connects subscribers with 3D designers. Ultimately, we hope to nurture a more accessible 3D printing culture through the facilitation of unique experientialism and promotion of designers. Furthermore, we want to help institute a mainstream understanding of 3D printing so that people everywhere can appreciate it, as the innovation continues to grow. 3D printing holds limitless applications and redefines possibility through the imaginativeness of its designers and users. 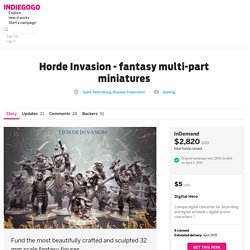 Miniatures are available in 3 versions. 32 mm scale for board game players. 3D Printed chess game ‘Throne of Kings: The Art of War’ reaches Kickstarter goal of $5,000. Sep 14, 2015 | By Tess Chess, one of the most ubiquitous board games around, and the ultimate game of strategy and war, has recently been revamped and redesigned to appeal to enthusiasts of the medieval gaming genre. 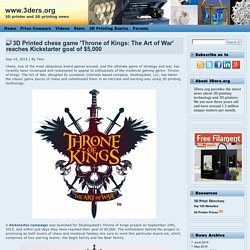 Throne of Kings: The Art of War, designed by Loveland, Colorado based company, Studioqubed, LLC, has taken the classic game pieces of chess and refashioned them in an intricate and exciting way using 3D printing technology. A Kickstarter campaign was launched for Studioqubed's Throne of Kings project on September 10th, 2015, and within just days they have reached their goal of $5,000. The enthusiasm behind the project is promising as both lovers of chess and medieval fantasy are sure to want this particular board set, which comprises of two warring teams: the Eagle family and the Bear family.

The process behind creating the pieces started with the digital sculpting and design of each piece. □Alternative UM2 Feeder - version two – YouMagine.com. Commercial use is allowed, you must attribute the creator, you may remix this work and the remixed work should be made available under this license. 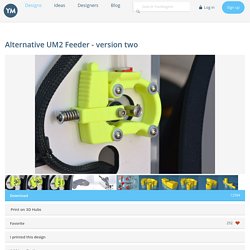 Learn more or download attribution tags Hopefully this will help clear some things up. Update 2015-02-19: Added a new body with a cutout to use the grommet from the "new" feeders instead of a piece of bowden.Update 2014-11-15: Uploaded length variations for the yoke, 35-40mm. I also added a zip with another version that has an included spacer for M16 screws so that you don't need to use washers.

Six lengths included in the zip. Right, here's my second (public) attempt at a new feeder design for the UM2. 3DVerkstan Knowledge Base. How to Store 3D Printing Filament. Did you know that some of your 3D prints may have partially or completely failed just because of humidity contained in the filament you used? This sort of humidity is invisible to the naked eye, so you probably blamed your print settings, your 3D printer or even doubted your abilities, but all of that may actually not have been the cause of your problem: it was the humid filament.

Some people tried to address this problem by creating more or less elaborate 3D filament storage solutions, like filament driers or special filament containers. The problem is that most are either bulky, energy consuming and/or slow, they come at a certain price or constructing them takes a lot of your time. Well, we may have just the solution for you: a quick, very simple and cheap way to store your filament without hassle. The filament is not extruding - tips & tricks. Printing Material Suppliers. Printing Material Suppliers. 3D-printed Lightsaber Design Philosophy and Printing Tips. For May the 4th, I designed a 3D printed lightsaber in commemoration of Star Wars day in collaboration with Ultimaker. There were many other designs out there, but none that I was really happy with. The examples I saw were mostly over simplified, impossible to print without supports, or difficult to assemble. I knew I wanted something more faithful to the original prop with better surface quality. So I set out to build my favorite design from the series. 4 vs 14 piece design I ended up making two versions of the Lightsaber, a 4 piece version which stresses ease of printing and assembly, and a 14 piece version that makes no compromise on surface quality.

- Large Format 3D Printer with 4x Synchronous Extruder 3D Printing. Greater than 470 x 435 x 690mm build Area The Beast's enormous build area allows users to print objects that have never before been possible on a printer with such a low price point. Our hope is for "The Beast" to make many previously unattainable projects and prints possible and to make it accessible to as many makers, inventors, DIY enthusiasts and artists as we can. High Speed and Simultaneous Printing The Beast's ability to simultaneously print 4 identical objects or groups of objects will enable small scale manufacturing capabilities at a fraction of the cost of 4 individual 3D printers. Wound Up - Coffee Filled Filament - 3Dom USA. Wound Up™ is a coffee filled 3D printing filament made using waste byproducts from coffee.

Wound Up™ uses those coffee left-overs to create a special 3D printing material with visibly unique print finishes. The filament produces products with a rich brown color and a noticeable natural grain. Now a cup printed with Wound Up™ is a true “coffee cup.” This is the first in a line of intriguing materials from 3Dom USA called the c2renew Composites. More distinctive bio-based products will be released in the near future. My first Marvin... So I've just joined 3D Hubs and printed my first Marvin! He is such a cute little fellow, and I wanted to make sure that he would look the best he could on my keyring. I am a jewellery designer, so I am quite used to working on a small scale, even in 3D printing. I used my Ultimaker Original +, which I finished building at the beginning of January. 3dhubs. Ref=nb_sb_ss_c_0_5?url=search-alias=aps&field-keywords=2.85 pla filament&sprefix=2. 2.85MM Filament - Printed Solid. Fbrc8 llc — Ultimaker Filament - PLA, ABS, UPET, FlexPLA.

Aug 14, 2015 | By Simon Considered by many to be an icon of geek culture, the 20-sided die - or “d20” - has been commonly used in role-playing games such as Dungeons and Dragons as the controller for most actions in a game. Of course, it was only a matter of time before somebody hacked the otherwise lifeless die into something more interactive - and in this case, it was Adafruit’s own Phillip Burgess. Metallic Busts - First Runs with Colorfab. Formlabs. In Interviews , News 500 prints. 12 printers. 2 days. We built a Popup Factory for SOLID Conference 2015 — where we printed, soldered and assembled wearable bands for attendees. Bld3r. Yeggi - Printable 3D Models Search Engine. Cults' Top 18 3D printable toy models for Christmas. Dec 5, 2014 Thanksgiving has only just come and gone, but Christmas is moving in fast. With just less than three weeks to go, decorations are going up all around us, and it wouldn't be a bad idea to start thinking about this year's Christmas presents.

If that's an annual cause of stress because time and money tend to run out quickly, why not consider 3D printing some presents? This will save you some money and allows you to keep your Christmas preparations in the comfort of your own home. Of course there's also the additional level of customization and love you can add to presents. 1. gCreate Rocket. PVC pipe construction set, ver.2 by DonaldJ. Jun's Anatomy Big Cats Anatomy models by Jun Huang. Amazon teams with 3D Systems, Sandboxr to 3D print custom video game characters for you. July 8, 2015 | By Simon With over $20 billion spent annually on video games and video game content, it’s clear that today’s video game options have come a long way since the days of Pong and Pac-Man.

Unsurprisingly, many gamers aren’t just kids these days as many of the parents themselves grew up playing Nintendo and have their own dedicated video game consoles or computers. The E3D BigBox 3D Printer. by BigBox3D Ltd. E3D and LittleBox have 15 years of combined 3D printing experience between them. We know what we're doing. Cults ・ Download free or paid 3D models for 3D printer. Mechwarrior by Joker X - Shapetizer.