MakerBot Stories. Chinese Company Builds Houses Quickly With 3D Printing. It's a house in a hurry. 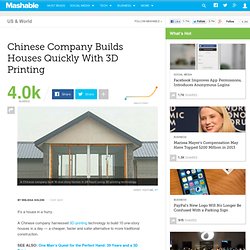 Marketplace on Stitcher - 3D printing could be the future of construction. This Crazy Liquid Blob Is Actually The House Of The Future. Think of a generic house, and you probably picture something along the lines of a simple children’s drawing: A basic box with a few windows and a door. 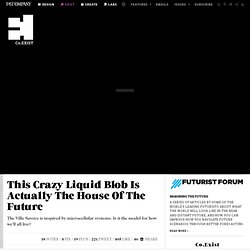 Even as architectural styles have evolved, the typical form of a home has stayed more or less the same. That’s why, at first glance, it’s hard to tell that this new design from postgraduate architecture student Gonzalo Vaíllo Martínez is a house at all. The designer wanted to challenge conventional expectations for houses of the near future. “We still have many restrictions imposed by Modernism,” Vaíllo says. A WikiHouse for World Maker Faire. World Maker Faire 2013 SketchUp WikiHouse. 3D Printers That Build Entire Houses: Contour Craftings Aims To Print 2,500 Square-Foot-Homes In 20 Hours [Video]

At a TED talk in Ojai, Calif., Behrokh Khoshnevis, director of the Manufacturing Engineering Graduate Program at the University of Southern California, said nearly 1 billion people in the world don’t have access to adequate shelter, a situation that breeds poverty, disease, illiteracy, crime and overpopulation. 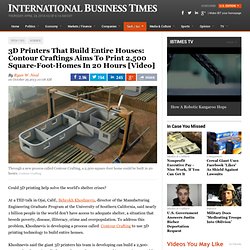 To address this problem, Khoshnevis is developing a process called Contour Crafting to use 3D printing technology to build entire houses. Khoshnevis said the giant 3D printers his team is developing can build a 2,500-square-foot house in as little as 20 hours. The Contour Crafting 3D printers could even do the electrical work, plumbing, tiling, finishing work and painting. Baroque On Steroids? The World's First 3-D Printed Room To Become A Reality. Michael Hansmeyer, who is known for using algorithms and computation to generate incredibly complex architecture, is finally ready to build (print) it. 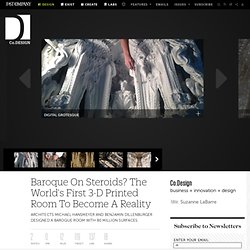 This summer, Hansmeyer, in collaboration with project partner Benjamin Dillenburger, will assemble a fully enclosed architectural folly whose highly wrought parts will all be 3-D printed. Hansmeyer and Dillenburger recently previewed a 1:3 scale prototype of the room at the Materializing Exhibition in Tokyo and Basel’s Swiss Art Awards. The design of the spaces, which blend intricately detailed columns with other finely sculptural and nonstructural elements, can be described as Baroque on steroids. Digital Grotesque represents a major development for Hansmeyer, who describes his designs as “computational architecture.” His previous series of cardboard and Styrofoam columns all included forms that he defined using algorithmic processes.

Well, that was then. The full-scale installation opens July 22. In The Future, Our Skyscrapers Will Be Built By Drones. The imagined architecture of the coming drone era is mostly defensive. 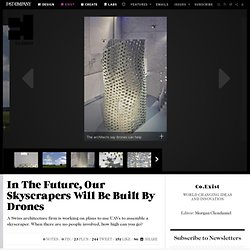 There’s the stealth-mode startup, Domestic Drone Countermeasures, with its camera-jamming home-security system. There’s the off-kilter fantasy, Shura City, with its symbolic minarets and militarized QR codes. But architecture has always been a discipline of optimism and futurism, and so it’s not surprising that there are architects who want to work with, not against, the unmanned aerial vehicles. The first movers appear to be the Swiss architects Gramazio & Kohler. Gilles Retsin of Softkill Design on 3D printed houses. Interview: earlier today, London studio Softkill Design unveiled plans for a 3D printed house. 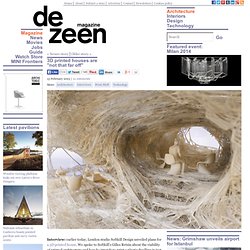 We spoke to Softkill's Gilles Retsin about the viability of printed architecture and how he intends to print a plastic dwelling in just three weeks. "When we started this research, it was a kind of science fiction," he says. 3D printed plastic house will be assembled "in a day" News: London architecture collective Softkill Design has joined the race to build the world's first 3D printed house, announcing plans for a plastic dwelling that could be built off-site in three weeks and assembled in a single day. 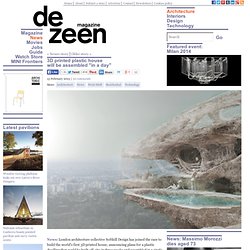 "It will hopefully be the first actual 3D printed house on site," said Gilles Retsin of Softkill Design. "We are hoping to have the first prototype out in the summer. " Update: read the full interview with Retsin about 3D-printed architecture. The single-storey Protohouse 2.0 will be eight metres wide and four metres long and will be printed in sections in a factory. The parts will be small enough to be transported in vans and then snapped together on site. "It would take up to three weeks to have all the pieces fabricated," said Retsin.

"You don't need any bolting, screwing, or welding on site," he added. A rival 3D printed house project by Dutch studio Universe Architecture was announced earlier this year, but Gilles dismissed its claims. Architecture Industry. The World’s First 3D-Printed Building Will Arrive In 2014 (And It Looks Awesome) Sure, 3D printing is fun and cute. 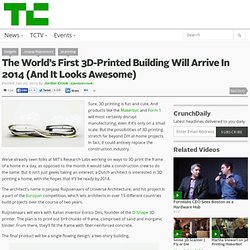 And products like the Makerbot and Form 1 will most certainly disrupt manufacturing, even if it’s only on a small scale. But the possibilities of 3D printing stretch far beyond DIY at-home projects. In fact, it could entirely replace the construction industry. We’ve already seen folks at MIT’s Research Labs working on ways to 3D print the frame of a home in a day, as opposed to the month it would take a construction crew to do the same. Printing 3D Buildings: Five tenets of a new kind of architecture / Neri Oxman. As a designer, architect, artist and founder of the Mediated Matter group at MIT’s Media Lab, Neri Oxman has dedicated her career to exploring how digital design and fabrication technologies can mediate between matter and environment to radically transform the way we design and construct our built world. 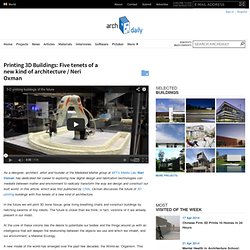 In this article, which was first published by CNN, Oxman discusses the future of 3D printing buildings with five tenets of a new kind of architecture. In the future we will print 3D bone tissue, grow living breathing chairs and construct buildings by hatching swarms of tiny robots. The future is closer than we think; in fact, versions of it are already present in our midst. At the core of these visions lies the desire to potentiate our bodies and the things around us with an intelligence that will deepen the relationship between the objects we use and which we inhabit, and our environment: a Material Ecology. Neri Oxman’s five tenets after the break… 1. Or consider the tree. 2. 3. 4.