10 Graphic & Web Design Tools That Will Explode in 2015. Every designer has a collection of tools that they find indispensable to doing their job. 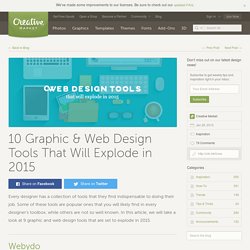 Some of these tools are popular ones that you will likely find in every designer’s toolbox, while others are not so well known. In this article, we will take a look at 9 graphic and web design tools that are set to explode in 2015. Webydo A B2B hybrid platform that combines both web design and development in one, Webydo is a great choice for designers looking to create website designs without needing to hand write code or rely on a web developer to help them.

One of the most exciting features in Webydo is the ability to create “pixel-perfect responsive web designs” that work great on a variety of devices. Share on Pinterest Webydo allows designers to begin with an existing design or layout or to start from scratch with a drag and drop interface. Invision Ink Infogram. Prototyping iOS And Android Apps With Sketch (With A Freebie!) After the untimely (and still kind of sad) demise of Fireworks1, I found myself looking for other ways to design apps and websites. 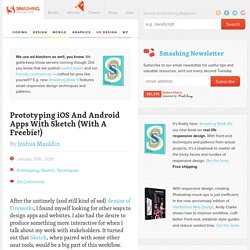 I also had the desire to produce something more interactive for when I talk about my work with stakeholders. It turned out that Sketch2, when paired with some other neat tools, would be a big part of this workflow. In this article, I’ll talk you through why you should prototype and how you can do it with Sketch and prototyping tools such as Flinto and InVision. You’ll also get a nicely documented freebie Sketch file to help you. Before we get started, here are a few articles, in case you‘re curious about why I am using Sketch for UI design: Why Prototype? When it comes to showing an app’s design to a team, a client or a stakeholder, I’ve found that an ugly-but-functional prototype beats the static bitmap of one state of a screen that I’d get from Sketch, Photoshop or the like.

Review: iOgrapher iPhone and iPad camera platform. Made for iOS devices, iOgrapher is a highly adaptable camera platform that can be equipped with a variety of aftermarket lenses, microphones and other equipment to turn Apple's mobile product range into a portable movie making studio. 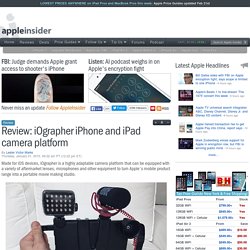 Fitted with premium optics and backed by state-of-the-art sensors, bespoke image processing technology and a vast app store, Apple's iOS devices are the most flexible portable camera systems on the market. Most attention is given to iPhones — we've seen car commercials shot on Apple's handset — as the devices are usually one generation ahead of flagship iPad models when it comes to camera capabilities, but the tablet range is quickly catching up.

Whether you're an iPhone or iPad user, iOgrapher looks to serve both communities with its light and flexible platform capable of accepting aftermarket lenses, microphones, lamps and more. Currently, iOgrapher works with the iPhone 5/5s, iPad 2/3/4, iPad Air, and iPad mini/mini 2/mini 3. The iOgrapher isn't pretty. Movie Mount turns your iPad 2 into a serious video-making machine. Keep it Reel: Make your iPad into a professional recording studio. Since the introduction of the iPad in 2010, I have dreamed of the day when I could walk into a studio and record, produce, and mix a live band using just my tablet. 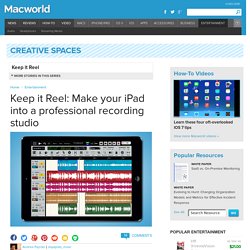 Recently, that dream became reality: I had the opportunity to produce and record a session for Ella Joy Meir—a very talented up-and-coming songwriter and composer based in the Boston/New York area. The plan was to record “You’ll Return,” an original song that she co-wrote with Michal Weiner, using a band made up of drums, acoustic and electric guitars, bass, vocals and piano. For this project, I decided to try and use the iPad for each stage of production—from recording and mixing all the way to mastering and SoundCloud distribution. The recording session was split in two days and took place in the new Berklee Production suites in Boston; the assistant engineer was the talented Vince Espi. (I’ve posted videos of the sessions and some of the things that went on behind the scenes.)

Nifty New Resin Solves a Major Problem With 3-D Printing. Until recently, buying a 3-D printer required a difficult choice: Get a heated-chamber system like the popular MakerBot, which prints durable, colorful pieces marred by ridges and pockmarks. 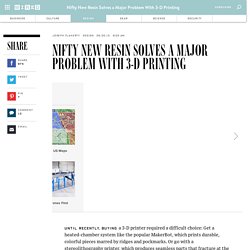 Or go with a stereolithography printer, which produces seamless parts that fracture at the slightest application of force. Now Formlabs offers a third choice with Tough Resin, which creates smooth cyan chains strong enough to hoist cinder blocks. Formlabs’ recently released its second-gen printer, the Form 1+, a $3,300 aluminum-and-plastic pillar that prints hi-res models using photosensitive resins and laser beams. It might look like a clone of the $2,550 Form 1, which raised nearly $3 million on Kickstarter a few years ago, but the resin it uses is a primordial ooze from which almost anything can emerge. That’s a big deal in the low-cost 3-D-printing market. The SLA technology Formlabs uses binds each layer chemically. Click to Open Overlay Gallery Why It Matters.