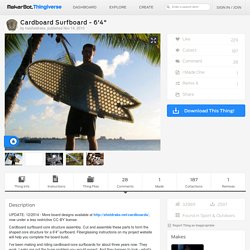 Cardboard surfboard core structure assembly. Cut and assemble these parts to form the shaped core structure for a 6'4" surfboard. Fiberglassing instructions on my project website will help you complete the board build. I've been making and riding cardboard-core surfboards for about three years now. They work. These files are also a source of replacement part cut patterns, if you've ordered this board core kit from me or a cutting service. This set of cut patterns is published under a Creative Commons attribution, share alike, non-commercial license.

The license is non-commercial. If you see glowing dollar signs in those translucent hexagons, you'll want to build at least one and surf it before considering whether there's any money to be made. 123D Make. Tinkercad. Autodesk 123D. 3DTin. Autodesk 123D Design. Autodesk 123D.

New Website Allows You to Create a 3D Printable Lithophane of Any Photo You Choose in 3 Seconds. Lithophane I created using the lithophane generator – My wife and I on our wedding – 11/2013 One of the main reasons why people purchase desktop 3D printers is because of the customizability that it provides them in creating whatever they want. 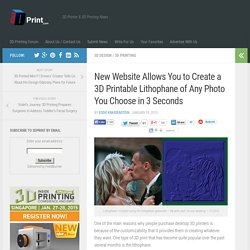 One type of 3D print that has become quite popular over the past several months is the lithophane. Historians believe the art form originated in the 1820s by a man named Baron Paul de Bourging. How 3-D Printing Will Change Education. Also known as rapid prototyping, 3-D printing is a technology that allows users to create three-dimensional physical products from a digital file. 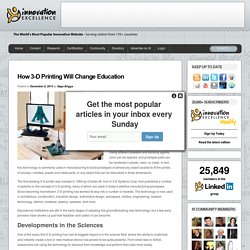 Each product is created one layer at a time, using an inkjet-like process that sprays a bonding agent onto a very thin layer of fixable powder. The bonding agent can be applied very accurately to build an object from the bottom up, layer by layer. The process even accommodates moving parts within the object. Using different powders and bonding agents, color can be applied, and prototype parts can be rendered in plastic, resin, or metal. In fact, this technology is commonly used in manufacturing to build prototypes of almost any object (scaled to fit the printer, of course)—models, plastic and metal parts, or any object that can be described in three dimensions.

The first working 3-D printer was created in 1984 by Charles W. Developments in the Sciences Research Fellow Dr. 3-D Printing as an Artistic Medium 1. 2. Make Your Own 3D Printer for Under $60 Using Recycled Electronic Components with Instructables Design. One of the obstacles to jumping headlong into the additive manufacturing milieu for many people is often the expense of the 3D printer itself. 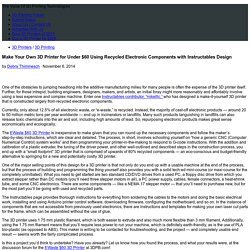 Further, for those intrepid, budding engineers, designers, makers, and artists, an initial foray might more reasonably and affordably involve using a less expensive and complex machine. Enter one Instructables contributor, “mikelllc,” who has designed a make-it-yourself 3D printer that is constructed largely from recycled electronic components. Currently, only about 12.5% of all electronic waste, or “e-waste,” is recycled. Instead, the majority of cast-off electronic products — around 20 to 50 million metric tons per year worldwide — end up in incinerators or landfills.

The EWaste $60 3D Printer is inexpensive to make given that you can round up the necessary components and follow the maker’s step-by-step instructions, which are clear and detailed. The Structure Sensor is the first 3D sensor for mobile devices. Fully 3D Printed Working Engine Runs Completely on Hot and Cold Water — and You Can Print Your Own For Free. 3D printing is fascinating, especially to those individuals who have not ever seen the technology in action previously. 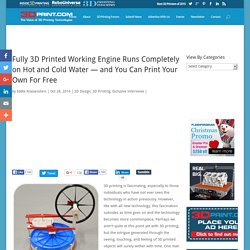 However, like with all new technology, this fascination subsides as time goes on and the technology becomes more commonplace. Perhaps we aren’t quite at this point yet with 3D printing, but the intrigue generated through the seeing, touching, and feeling of 3D printed objects will surely wither with time. One man in New Zealand, named Don Clucas, realizes this, and with the help of the University of Canterbury, he has come up with a way to fascinate even those already acclimated to 3D printing technology. In a project that could be considered “breathtaking,” “innovative,” and “potentially revolutionary,” Clucas has created what he believes is the first ever fully 3D printed working engine. Polyes Q1 SLA-based 3D Printing Pen to Launch on Kickstarter in November. Back in February of last year, Boston-based, WobbleWorks LLC. launched a Kickstarter campaign for what was the very first 3D printing pen, called the 3Doodler. 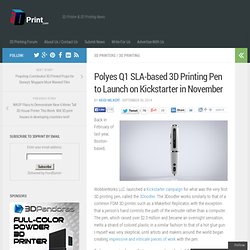 The 3Doodler works similarly to that of a common FDM 3D printer, such as a Makerbot Replicator, with the exception that a person’s hand controls the path of the extruder rather than a computer. The pen, which raised over $2.3 million and became an overnight sensation, melts a strand of colored plastic in a similar fashion to that of a hot glue gun. I myself was very skeptical, until artists and makers around the world began creating impressive and intricate pieces of work with the pen. Thingiverse - Digital Designs for Physical Objects.