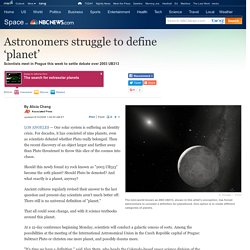 For decades, it has consisted of nine planets, even as scientists debated whether Pluto really belonged. Then the recent discovery of an object larger and farther away than Pluto threatened to throw this slice of the cosmos into chaos. Should this newly found icy rock known as "2003 UB313" become the 10th planet? Should Pluto be demoted? Sirius B — A New Pup in My Life. Aaah-ooooooooooh! 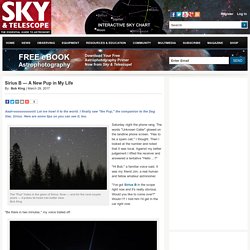 Let me howl it to the world. I finally saw "the Pup," the companion to the Dog Star, Sirius. Here are some tips on you can see it, too. The "Pup" hides in the glare of Sirius. Pushing Limits: A Spring Sky Double Star Romp. Push your telescope to the limit and put your eyes to the test with this series of tight-knit springtime double stars. 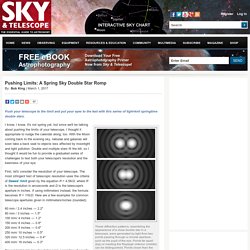 These diffraction patterns, resembling the appearance of a close double star in a telescope, were generated by light from two points passing through a circular aperture, such as the pupil of the eye. Points far apart (top) or meeting the Rayleigh criterion (middle) can be distinguished. Points closer than the Rayleigh criterion (bottom) appear elongated or blend into one. Spencer Bliven / Wikimedia Commons / Public Domain I know, I know. Hydrogen map of the sky shows the Sun’s motion in the galaxy. HI4PI Collaboration Even after all this time—13.8 billion years, give or take—hydrogen still dominates the Universe. 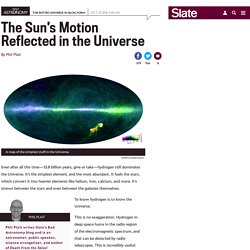 It’s the simplest element, and the most abundant. It fuels the stars, which convert it into heavier elements like helium, iron, calcium, and more. 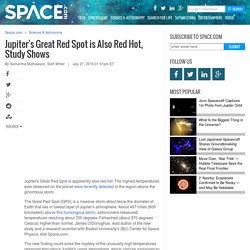 The Great Red Spot (GRS) is a massive storm about twice the diameter of Earth that lies in lowest layer of Jupiter's atmosphere. About 497 miles (800 kilometers) above this humongous storm, astronomers measured temperatures reaching about 700 degrees Fahrenheit (about 370 degrees Celsius) higher than normal, James O'Donoghue, lead author of the new study and a research scientist with Boston University's (BU) Center for Space Physics, told Space.com. 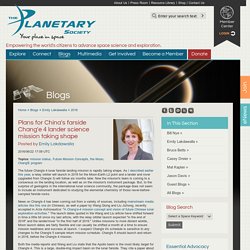 Theft behind Planet 9 in our solar system. Through a computer-simulated study, astronomers at Lund University in Sweden show that it is highly likely that the so-called Planet 9 is an exoplanet. 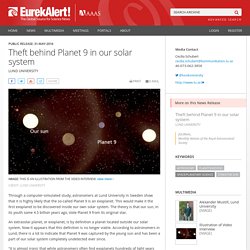 This would make it the first exoplanet to be discovered inside our own solar system. The theory is that our sun, in its youth some 4.5 billion years ago, stole Planet 9 from its original star. An extrasolar planet, or exoplanet, is by definition a planet located outside our solar system. Now it appears that this definition is no longer viable. According to astronomers in Lund, there is a lot to indicate that Planet 9 was captured by the young sun and has been a part of our solar system completely undetected ever since.

There Be Monsters Here! How to Find the Biggest Star. Antares and Betelgeuse may be colossal stars, but we take it to the next level of stellar monstrosity with a visit to UY Scuti, a star that makes our Sun seem no bigger than a pinpoint. 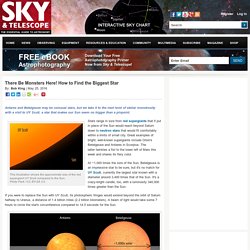 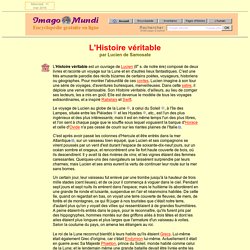 The Laws Of Cosmology May Need A Re-Write - Universe Today. Something’s up in cosmology that may force us to re-write a few textbooks. 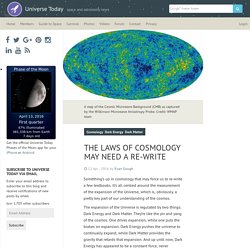 It’s all centred around the measurement of the expansion of the Universe, which is, obviously, a pretty key part of our understanding of the cosmos. The expansion of the Universe is regulated by two things: Dark Energy and Dark Matter. Exoplanetes. The Moon's Other Axis - Universe Today. It’s tempting to think that the Moon never changes. You can spend your whole life looking at it, and see no evidence of change whatsoever. In fact, the ancients thought the whole Universe was unchanging. You may have heard of a man named Aristotle. He thought the Universe was eternal and unchanging.