An exoplanet dive bombs its star. Now that astronomers have bagged more than 4,000 exoplanets — alien worlds orbiting alien stars — we're starting to see ones that are really weird. 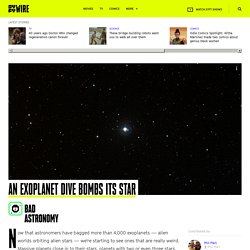 Massive planets close in to their stars, planets with two or even three stars, maybe even ones with moons. 'Solar Gravity Lens' Could Bring Exoplanets into Sharp Focus. Aerospace’s artist rendering of the Solar Gravity Lens concept which will enable enhanced viewing of potentially habitable exoplanets.Credit: The Aerospace Corporation An innovative deep-space concept that relies on a solar gravity lens (SGL) to enable enhanced viewing of exoplanets is under study by NASA’s Jet Propulsion Laboratory and The Aerospace Corporation. 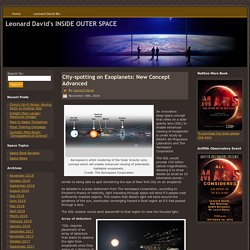 The SGL would provide 100-billion optical magnification, allowing it to show details as small as 10 kilometers across – similar to being able to spot something the size of New York City on an exoplanet. As detailed in a press statement from The Aerospace Corporation, according to Einstein’s theory of relativity, light traveling through space will bend if it passes near sufficiently massive objects. This means that distant light will bend around the periphery of the sun, eventually converging toward a focal region as if it had passed through a lens.

The SGL mission would send spacecraft to that region to view the focused light. An aurora glows over a (possible) rogue planet. Well now, this is interesting: Astronomers have detected radio wave emission from a planetary-mass object outside our solar system. 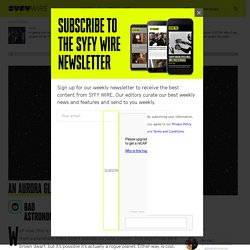 This object may be a brown dwarf, but it’s possible it’s actually a rogue planet. Either way is cool, but what’s even cooler is that the emission may indicate the object has a moon or even a planetary-mass companion orbiting it! The key to all this is magnetism. Stars can have magnetic fields, as can planets, and in both cases the basic physics is the same. In a nutshell, if you take a bunch of charged particles and move them around, they generate a magnetic field. The Sun has a ridiculously complex magnetic field. But what about lower mass objects? The first brown dwarfs were found in the 1990s, and it wasn’t clear if their internal structure would allow them to have magnetic fields. You’d expect radio wave emission from magnetic objects, too. Hubble Images Three Debris Disks Around G-type Stars - Universe Today. A team using the Hubble Space Telescope has imaged circumstellar disk structures (CDSs) around three stars similar to our Sun. 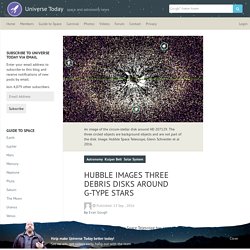 The stars are all G-type solar analogs, and the disks themselves share similarities with our Solar System’s own Kuiper Belt. Studying these CDSs will help us better understand their ring-like structure, and the formation of solar systems. The team behind the study was led by Glenn Schneider of the Seward Observatory at the University of Arizona. They used the Hubble’s Space Telescope Imaging Spectrograph to capture the images. 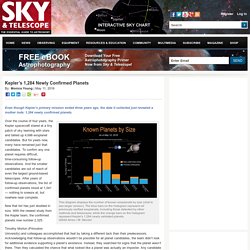 This diagram displays the number of known exoplanets by size (click to see larger version). The blue bars on the histogram represent all previously verified exoplanets, including those detected by other methods and telescopes, while the orange bars on the histogram represent Kepler's 1,284 newly validated planets. NASA Ames / W. New release from Kepler reveals more than 1,200 new alien exoplanets. Shutterstock/Vadim Sadovski Astronomers working with data from the Kepler space telescope have announced the verification of a stunning 1,284 new exoplanets, worlds orbiting other stars. 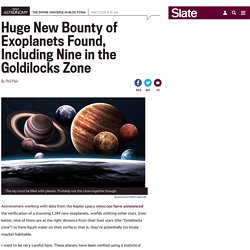 Promising Worlds Found Around Nearby Ultra-cool Dwarf Star. The engineers huddled around a telemetry screen, and the mood was tense. 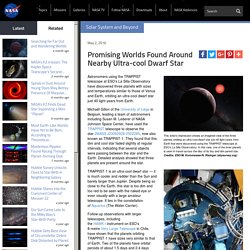 They were watching streams of data from a crippled spacecraft more than 50 million miles away – so far that even at the speed of light, it took nearly nine minutes for a signal to travel to the spacecraft and back. Engineers developed an innovative way to stabilize and control the spacecraft. This technique of using the sun as the "third wheel" has Kepler searching for planets again, but also making discoveries on young stars to supernovae. Credits: NASA Ames/W Stenzel It was late August 2013, and the group of about five employees at Ball Aerospace in Boulder, Colorado, was waiting for NASA’s Kepler space telescope to reveal whether it would live or die. 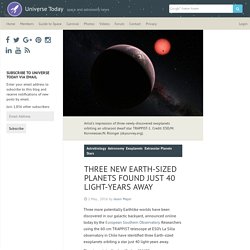 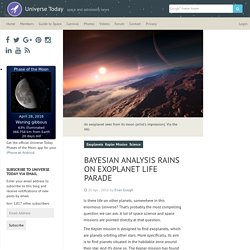 That’s probably the most compelling question we can ask. A lot of space science and space missions are pointed directly at that question. The Kepler mission is designed to find exoplanets, which are planets orbiting other stars. More specifically, its aim is to find planets situated in the habitable zone around their star. An Earth-like Planet Only 16 Light Years Away? - Universe Today. Earth may have a new neighbour, in the form of an Earth-like planet in a solar system only 16 light years away. 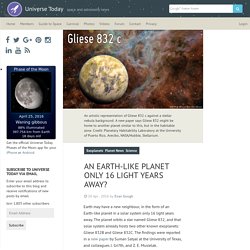 The planet orbits a star named Gliese 832, and that solar system already hosts two other known exoplanets: Gliese 832B and Gliese 832C. The findings were reported in a new paper by Suman Satyal at the University of Texas, and colleagues J. Gri? Th, and Z. E. Gliese 832B is a gas giant similar to Jupiter, at 0.64 the mass of Jupiter, and it orbits its star at 3.5 AU. The newly discovered planet is still hypothetical at this point, and the researchers put its mass at between 1 and 15 Earth masses, and its orbit at between 0.25 to 2.0 AU from Gliese 582, its host star. Hot Nights, Hotter Days on Super-Earth 55 Cancri e. Volcanic wasteland or exotic, two-faced atmosphere? A new thermal map of this super-Earth exoplanet is puzzling astronomers. An artist's depiction of 55 Cancri e as it zips around its Sun-like host star. ESA / Hubble / M.