How Many Fundamental Constants Does It Take To Explain The Universe? Jaime Salcido/simulations by the EAGLE Collaboration At a fundamental level, our Universe is made of particles, forces, interactions, and the fabric of space and time. 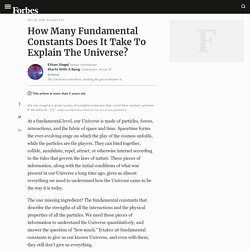 Spacetime forms the ever-evolving stage on which the play of the cosmos unfolds, while the particles are the players. They can bind together, collide, annihilate, repel, attract, or otherwise interact according to the rules that govern the laws of nature. An Astronomer Checked to see if There's a Secret Message in the Cosmic Microwave Background Radiation. In the New Testament, the book of John opens with In the beginning was the Word. 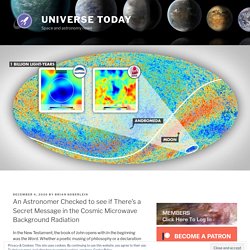 Whether a poetic musing of philosophy or a declaration of faith, it encapsulates an idea that has been around a long time. If the cosmos was made, either by advanced aliens or a divine creator, might this architect have buried a message within the universe? Some absolute proof of intentional design. The message wouldn’t need to be profound. It could be as simple as Kilroy was here, or as Douglas Adams proposed, Sorry for the Inconvenience. Carl Sagan suggested mathematics as a possibility. The idea was first proposed in 2006 with a paper published in Modern Physics Letters. Hubble Gazes Upon Cosmic Wonderland. This is Not a Photo of the Milky Way. It's the Map of 1.8 Billion Stars From Gaia's Major New Data Release. In 2013, the European Space Agency (ESA) deployed the Gaia mission to space, a next-generation observatory that will spend the next five years gathering data on the positions, distances, and proper motions of stars. 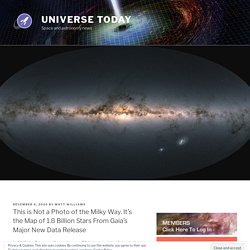 The resulting data will be used to construct the largest 3D space catalog ever, totaling 1 billion stars, planets, comets, asteroids, quasars, and other celestial objects. Since the mission began, the ESA has issued three early releases of Gaia data, each of which has led to new research findings and more detailed maps of our galaxy. Based on the third release of mission data, known as Early Data Release 3 (Gaia EDR3), astronomers have created a map of the entire sky that includes updated data on celestial objects and manages to capture the total brightness and color of stars in our galaxy. New Maps Compared to the previous release (Gaia DR2) that was released in April of 2018, this represents an increase of more than 100 million sources.

Gaia DR2 contents - Gaia - Cosmos. Gaia Data Release 2 was released on 25 April 2018 and is available through the Gaia Archive. 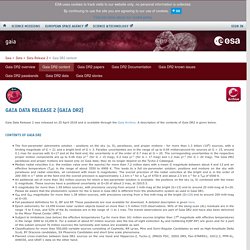 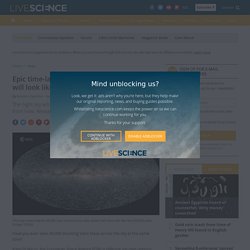 If you'd like to, the European Space Agency (ESA) is offering you two options: Either stare at the night sky for about half a million years as our solar system drifts steadily through the Milky Way (some patience required) — or, watch a new 60-second time-lapse simulation of the same thing, courtesy of the ESA's Gaia space observatory. In the new simulation, 40,000 stars — all located within 325 light-years of Earth's sun — whiz through space, leaving long trails of light behind them. Each point of light represents one real object in the Milky Way, and each shining trail shows that object's projected movement through the galaxy over the next 400,000 years.

Brighter, faster streaks are located closer to our solar system, while dimmer, slower ones live much farther away. Related: 9 Ideas about black holes that will blow your mind Originally published on Live Science. Endless Creation Out of Nothing. Astronauts describe the emptiness and darkness of space far from Earth as a startling experience. 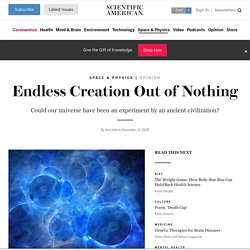 So did the poet Rainer Maria Rilke, in a poem e-mailed to me by writer Dror Burstein. Without ever having ventured into space (obviously), Rilke wrote a century ago: “Night, shuddering in my regard, but in yourself so steady; inexhaustible creation, enduring beyond the fate of earth.” Is there a modern scientific interpretation to Rilke’s poem? The reality is that space in neither empty nor dark.

Quantum Equation Suggests the Big Bang Never Occurred and the Universe Has No Beginning · The Mind Unleashed. New study gives an astonishing answer to the eternal question of how the world began. 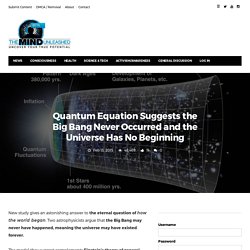 Two astrophysicists argue that the Big Bang may never have happened, meaning the universe may have existed forever. The model they suggest complements Einstein’s theory of general relativity with quantum corrections, and could also explain dark matter and dark energy. This newly discovered icy world could be the key to finding Planet Nine. Scientists have announced the discovery of a new icy world on the fringes of the Solar System, and while this distant object is only very small, it could help us track down something that's meant to be much, much bigger: the hypothesised but as yet unconfirmed Planet Nine. 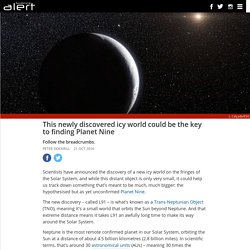 The new discovery – called L91 – is what's known as a Trans-Neptunian Object (TNO), meaning it's a small world that orbits the Sun beyond Neptune. And that extreme distance means it takes L91 an awfully long time to make its way around the Solar System. Neptune is the most remote confirmed planet in our Solar System, orbiting the Sun at a distance of about 4.5 billion kilometres (2.8 billion miles).

This newly discovered star system just broke the luminosity record. Astronomers have spotted a spectacular gamma-ray binary system in a galaxy right next door to our own, and not only is it the first to be found outside the Milky Way - it's also the brightest one yet. 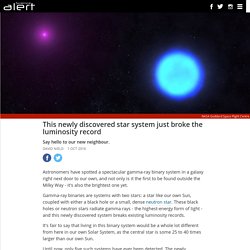 Gamma-ray binaries are systems with two stars: a star like our own Sun, coupled with either a black hole or a small, dense neutron star. These black holes or neutron stars radiate gamma rays - the highest-energy form of light - and this newly discovered system breaks existing luminosity records. It's fair to say that living in this binary system would be a whole lot different from here in our own Solar System, as the central star is some 25 to 40 times larger than our own Sun. Until now, only five such systems have ever been detected. NASA to Launch $1.25 Billion Asteroid Redirect Mission (ARM) in 2021. Sep 21, 2016 05:57 AM EDT Asteroids pose a constant threat to Earth and mankind, but these ferocious space rocks can also provide a ton of information about the origin and formation of the Solar System and the universe. 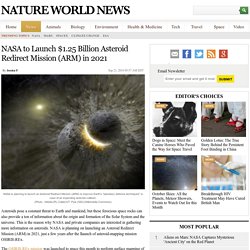 This is the reason why NASA and private companies are interested in gathering more information on asteroids. NASA is planning on launching an Asteroid Redirect Mission (ARM) in 2021, just a few years after the llaunch of asteroid-mapping mission OSIRIS-REx. The OSIRIS-REx mission was launched to space this month to perform surface mapping of asteroid Bennu. The mission is also tasked to collect asteroid samples using its robotic arm and to bring the samples back to Earth for analysis. Since the first asteroid mission is purely scientific in nature, NASA ARM mission will be focused on protecting the Earth from an asteroid collision. Astronomers just spotted deep-space galaxies that are like nothing we've seen before. Astronomers have gazed deep into a distant region of space and found evidence of a hidden trove of young galaxies that are completely unknown to science.

The new observations, made using the Atacama Large Millimetre/submillimetre Array (ALMA) in Chile, give us a whole new perspective on the galactic population of a famous region of space called the Hubble Ultra-Deep Field (HUDF). Back in 2004, scientists stunned the world with the HUDF: an image showing a window of space in the Fornax constellation, depicting some 10,000 galaxies as they existed around 13 billion years ago – only shortly after the Big Bang. NASA can't explain the 'impossible' cloud that's been spotted over Titan. NASA’s Cassini spacecraft just spotted a mysterious ice cloud over Saturn’s largest moon, Titan, and its appearance challenges everything we thought we knew about the moon’s atmosphere. First spotted decades ago by NASA's Voyager 1 spacecraft, the cloud has reappeared for the second time, and it's somehow made up of compounds that barely exist in Titan’s atmosphere.

So where did it come from? "The appearance of this ice cloud goes against everything we know about the way clouds form on Titan," said lead researcher Carrie Anderson from NASA's Goddard Space Flight Centre. The Sun will destroy Earth sooner than you might think. There are plenty of ways Earth could go.

It could smash into another planet, be swallowed by a black hole, or get pummelled to death by asteroids. There’s really no way to tell which doomsday scenario will be the cause of our planet’s demise. But one thing is for sure — even if Earth spends the rest of its eons escaping alien attacks, dodging space rocks, and avoiding a nuclear apocalypse, there will come a day when our own sun will eventually destroy us. This process won’t be pretty, as Business Insider’s video team recently illustrated when they took a look at what will happen to Earth when the sun finally does die out in a blaze of glory.

NASA's making a major Kepler announcement tomorrow! Get the popcorn ready. NASA will host a news teleconference at 1 pm EDT Tuesday, May 10 (5pm UTC, 3am AEST on Wednesday), to announce the latest discoveries made by its planet-hunting mission, the Kepler Space Telescope. Back in March 2009, when Kepler was launched, scientists didn’t know how common planets were outside our solar system. But soon, the telescope revealed that almost all stars host a plethora of alien worlds. Then, in 2014, the spacecraft began a new, extended mission called K2. New study shows how rapidly Earth's magnetic field is changing.

New research has shown in the most detail yet how rapidly Earth's magnetic field - which acts like a shield to protect us from harsh solar winds and cosmic radiation - is changing, getting weaker over some parts of the world, and strengthening over others. Although invisible, these changes can have big impacts - the fluctuation is already shifting the location of the magnetic North Pole, and could determine how space events such as solar storms affect us in the future. But thanks to the new study, scientists now think they know what's causing them, and how to predict them going forward. This isn't the first research to show that Earth's magnetic field is changing. Gizmodo. What Is the Limit to How Far We Can Travel in Space? Einstein's Theory of Relativity Holds True for Early Universe, 3D Map Confirms.

Just over one hundred years after Albert Einstein proposed his general theory of relativity, scientists have mapped nearly 3,000 ancient galaxies to confirm its rules held true in the early universe. The galaxies in question, which are 13 billion light-years from Earth, formed less than a billion years after the Big Bang. Shooting stars show Earth had oxygen eons before we thought. Andrew Tomkins By Jeff Hecht Few things seem more ephemeral than shooting stars streaking across the sky.

Did Black Hole “Mimickers” Produce LIGO Signal? Recently detected gravitational waves might not be a signature of black holes but of other massive objects that lack an event horizon. V. Cardoso et al., Phys. A binary star is flying out of our galaxy and researchers don't know why. You don’t need a Stephen Hawking-level of understanding to know that things usually orbit other things in the Universe, but apparently nobody told that to PB 3877 - a binary star system that’s traveling 2 million kilometres per hour (1.24 million mph) away from the Milky Way.

Yup, PB 3877 is trying to strike out on its own despite the gravitational pull of our galaxy, and researchers have no idea why. These 3 nearby planets could be our best shot yet to find alien life. Astronomers have discovered the first ever comet without a tail. Astronomers might have finally detected where mysterious, extragalactic neutrinos are coming from. To Scale: The Solar System. To Scale: The Solar System From To Scale: - Path - Curiosity. Mysterious blue flashes in space and upside-down lightning have been caught on film. Astronomers have discovered a region in space where black holes have mysteriously aligned.