Astronomers Find 20 - Yes 20 - New Moons for Saturn. The reign of Jupiter, named after the father of the Olympian gods, has been long and sweet. 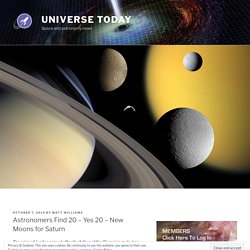 Aside from being the largest planet in the Solar System, it was this gas giant that demonstrated in the 17th century that planets other than Earth can support a system of moons. Between its size, powerful magnetic field, and system of 79 moons, Jupiter looked set to remain the king of the planets finitely. But it looks like Saturn, named after the father of Jupiter in Greco-Roman mythology, might have just knocked Jupiter off that pedestal. 20 New Moons Found Around Saturn, Snagging Satellite Record from Jupiter. Saturn has overtaken Jupiter as the solar system's satellite king. 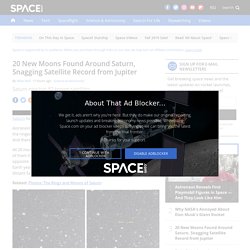 Astronomers just discovered 20 previously unknown Saturn moons, boosting the ringed planet's tally of known satellites to 82 — three more than Jupiter. And there's more exciting news: You can help name these newfound objects. All 20 moons are tiny, measuring about 3 miles (5 kilometers) across. Astronomers are watching a star die in real time. This too shall pass. 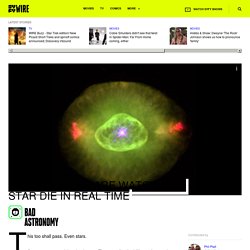 Even stars. Stars seem eternal, but they’re not. They may live for billions of years, but they eventually die. How exactly they do this depends on lots of things, most importantly their mass: High-mass stars explode, while stars that are more Sun-like in their mass do so more slowly. The Sun is many billions of years away from swelling into a red giant, shedding its outer layers, revealing its core as a tiny, hot white dwarf, and then fading away over time. NASA Telescopes Reveal the Atmosphere of A Strange Hybrid Exoplanet. Out there in space is an unusual exoplanet name Gliese 3470 b (GJ 3470 b.) 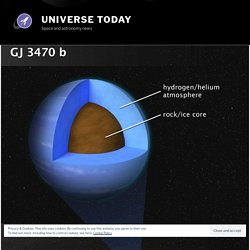 It’s a strange world, kind of like a hybrid between Earth and Neptune. It has a rocky core like Earth, but is surrounded by an atmosphere made of hydrogen and helium. That combination is unlike anything in our own Solar System. The planet orbits a red dwarf star called Gliese 3470, in the constellation Cancer. GJ 3470 b is about 12.6 Earth masses, meaning it’s roughly halfway between Earth and Neptune in mass. Apollo 11 in Real-time. Dragonfly. Lunar Reconnaissance Orbiter Camera. Lunar Reconnaissance Orbiter Camera Apollo 11 10 m Ground Elapsed Time: United States Astronauts Neil Armstrong and "Buzz" Aldrin landed the Apollo 11 Lunar Module (LM) in Mare Tranquillitatis [0.67416 N, 23.47314 E], at 20:17:40 UTC 20 July 1969. 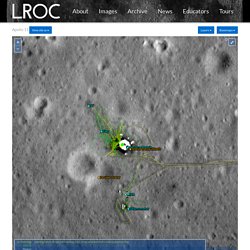 Take a look at these related Featured Image posts: Theory proposes that Venus could have been habitable, but a large ocean slowed down its rotation, killing it. There’s no sense in sugar-coating it – Venus is a hellish place! 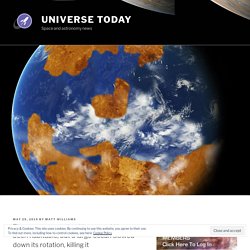 It is the hottest planet in the Solar System, with atmospheric temperatures that are hot enough to melt lead. The air is also a toxic plume, composed predominantly of carbon dioxide and sulfuric acid rain clouds. And yet, scientists theorize that Venus was once a much different place, with a cooler atmosphere and liquid oceans on its surface. Unfortunately, this all changed billions of years ago as Venus experienced a runaway greenhouse effect, changing the landscape into the hellish world we know today. According to a NASA-supported study by an international team of scientists, it may have actually been the presence of this ocean that caused Venus to experience this transition in the first place.

Wait. *HOW* fast do giant planets form? Back in the day, when I worked on supporting astronomers’ Hubble observations, one of my favorite projects was one involving observing very young stars. 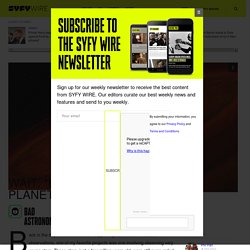 These stars, just a few million years old, were still surrounded by a swirling disk of gas and dust which, at the time, we assumed were forming planets. These observations were cutting edge, and were giving us our first glimpses at these disks in detail. I worked hard to write software that allowed the team to analyze the shape of the disks and the way they reflected their star’s light, all to learn more about the process of planetary formation in its earliest stages. That wasn’t all that long ago, but oh my, how things have changed. These days, we get images of protoplanetary disks that look like this: Wow. A galaxy is blowing enormous megacharged superbubbles of gas and cosmic rays. About 65 million light years from Earth — a fair distance, though relatively close by cosmic standards — lies a lovely nearly edge-on spiral galaxy. 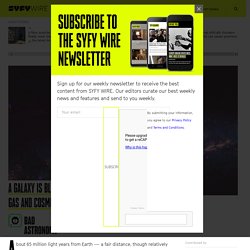 Called NGC 3079, it looks very much like thousands of other galaxies of its kind, and in fact isn't so different from our own Milky Way. A tad smaller, at 70,000 light years or so across (the Milky Way is 100,000), but otherwise you might not give it a second glance. Until, that is, you notice that in its center is a towering fountain of gas spewing from its core, looking very much like flames licking out into space.

Tilted Exoplanets Could Explain Odd Orbits. Complex Life Might Require a Very Narrow Habitable Zone. Since the Kepler Space Telescope was launched into space, the number of known planets beyond our Solar System (exoplanets) has grown exponentially. 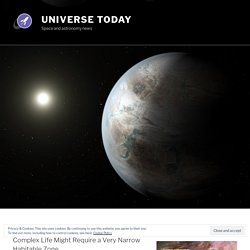 At present, 3,917 planets have been confirmed in 2,918 star systems, while 3,368 await confirmation. Pluto and Charon Are Missing Small Craters. More Evidence that Planet 9 is Really Out There. What’s going on in the distant reaches of our Solar System? 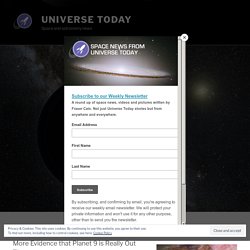 Is there a Planet 9 out there? Out in the frigid expanse of our System, there are bodies on orbital paths that don’t make sense in terms of our eight-planet Solar System. There seems to be an undiscovered body out there, several times more massive than Earth, shaping the orbits of some Kuiper Belt Objects (KBOs), and driving astronomers to look deeper and more thoroughly into the extreme reaches of our System. What they’re looking for is the mysterious, and so far unproven, ninth planet. The attempt to understand our Solar System is one of our most ancient quests, and though our catalogue of objects in the inner Solar System is pretty comprehensive, our knowledge of the outer System is anything but complete.

NASA to Explore Early Universe, Origins of Life with SPHEREX. The SPHEREX mission will create multiple surveys of the near-infrared sky that will reveal the origins of life and perhaps the universe itself. An artist's impression of SPHEREx in orbit. Caltech. Category:Augsburger Wunderzeichenbuch – Wikimedia Commons. CancelEditDeletePreviewrevert Text of the note (may include Wiki markup) Could not save your note (edit conflict or other problem). Please copy the text in the edit box below and insert it manually by editing this page. Flowers of the Sky. A Star's Outburst is Releasing Organic Molecules Trapped in the ice Around it. According to widely-accepted theories, the Solar System formed roughly 4.6 billion years ago from a massive cloud of dust and gas (aka. Nebular Theory). This process began when the nebula experienced a gravitational collapse in the center that became our Sun.

The remaining dust and gas formed a protoplanetary disk that (over time) accreted to form the planets. However, scientists remain unsure about when organic molecules first appeared in our Solar System. Luckily, a new study by an international team of astronomers may be able to help answer that question. The study which describes their findings recently appeared in the scientific journal Nature Astronomy. Two Newly-Discovered Exoplanets are Probably the Result of a Catastrophic Collision. The Largest Alien Planet of TRAPPIST-1 Has an Atmosphere That Evolved Over Eons. The largest of the worlds in the seven-planet TRAPPIST-1 system boasts an atmosphere that has evolved over time, rather than the one that formed with it. Observations made with NASA's Hubble Space Telescope reveal that the planet's atmosphere is different from its nascent environment, meaning it's most likely a rocky world similar to others in the system.

"This atmosphere is not the one it was born with," Hannah Wakeford, a researcher at the Space Telescope Science Institute in Baltimore, Maryland, told Space.com. A natal atmosphere would be rich in hydrogen, which the researchers don't see. Instead, "it's been changed by different processes," Wakeford said. Atmospheric and geological activity could have played a significant role in the changes. Asteroid Impacts Increased 290 Million Years Ago, Lunar Craters Reveal. Researchers have estimated the ages of craters on the lunar surface, finding that the rate of large impacts nearly tripled 290 million years ago — an increase that might be ongoing.

We know that the solar system can be a chaotic place, where things crash into each other every now and then. The proof stares at us every night: The pockmarked surface of the Moon has been littered by hundreds of thousands of craters, created in asteroid impacts of all sizes. A team of scientists used NASA's Lunar Reconnaissance Orbiter data to study the Moon’s craters, scaled by size and color-coded by age (blue indicates those younger than 290 million years), to understand the impact history of the Earth. Young craters dominate the lunar surface .NASA / LRO / USGS / University of Toronto Earth must also have been bombarded; however, our planet’s active geology, including weather and plate tectonics, is extremely efficient in removing the marks left behind by ancient impacts.

Israeli Beresheet Moon lander ships to Florida for mid-February launch. Jason Davis • January 22, 2019 Israeli non-profit SpaceIL has shipped its privately developed Moon lander, Beresheet, to Cape Canaveral ahead of its mid-February launch aboard a SpaceX Falcon 9 rocket. Piercing the Veil of Our Black Hole. Saturn's Rings are Only 10 to 100 Million Years Old. Sans titre. We Don’t Really Know When the Sun Rises. Steam-Powered Spacecraft Could Explore the Asteroid Belt Forever, Refueling Itself in Space. Saturn’s rings are WAY younger than the planet itself… and they’re disappearing.

NASA’s Campaign to Return to the Moon with Global Partners. Just discovered! "Farout", the Farthest Object Ever Seen in the Solar System. Uh oh, Mars Doesn't Have Enough Carbon Dioxide to be Terraformed. For almost a century now, the concept of terraforming has been explored at length by both science fiction writers and scientists alike. With All These New Planets Found in the Habitable Zone, Maybe it's Time to Fine Tune the Habitable Zone. In the past few decades, thousands of extra-solar planets have been discovered within our galaxy.

The Future of Our Sun is Still a Bit of a Puzzle. What Will Happen When it Dies? Ice prospecting on the Moon. Good News For The Search For Life, The Trappist System Might Be Rich In Water. Crab Nebula (one decade time-lapse movie) (DetlefHartmann) - Full resolution. Comet Lovejoy Sheds Light On Source Of Earth's Water - Astrobiology Magazine.

Einstein was right (again)! Astronomers watch as a star’s gravity bends light from another star. Potential “Failed Supernova” Black Hole Discovered. Juno: Surprises in First Science Results. Saturn’s moons could reassemble after a cosmic smash-up. Astrophoto: Eight planets and a Moon, from east to west. Astronomy Picture of the Day.