Resources for the English 10 synthesis essay on shopping malls.

Dead Malls. Will the mall survive COVID? Whatever happens, these artists want to capture them before they're gone. Ryan Taylor can't explain why he loves malls, but he knows he misses the ones he grew up with — places like Highfield Square and the Crystal Palace indoor amusement park, two long-gone Moncton-area spots where he worked back in high school. 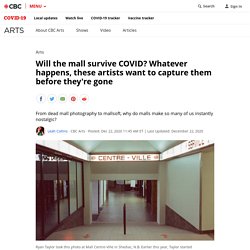 Grim picture for US malls as crisis in movies business takes toll. Rethinking shopping malls: How icons of the '80s can survive a changing retail landscape. When Victor Gruen first imagined the shopping mall, the Austrian architect envisioned a modern re-thinking of the small-town meeting places he loved in Europe. 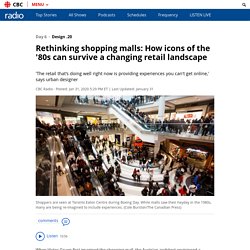 Like the plazas around his Vienna home, enclosed shopping malls would offer the growing population of suburban Americans spaces to gather, eat and shop — but with the modern convenience of heat in the winter and air conditioning in the summer. Gruen's malls would have civic uses too, combining business with libraries and post offices, explained architecture and urban design expert Ellen Dunham-Jones. "He really saw them as town centres," she told Day 6 host Brent Bambury. Untitled. Today’s theme: what happens to buildings, after they die. 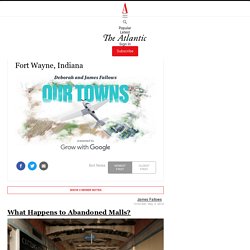 Today’s locale: a major manufacturing center along Indiana’s I-69 corridor, the industrial stronghold of Fort Wayne. The second lives of buildings—or third, or fourth or tenth—after they’ve outlived their original economic or civic purpose, is a topic that has commanded Deb’s and my attention more and more, with each new American venue we spend time in. Untitled. Next phase of Oakridge Centre redevelopment detailed in new renderings. A closer look at a large portion of the Oakridge Centre redevelopment is provided in a recently submitted development application. 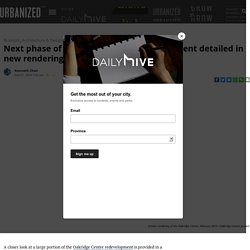 The next phase of the expansive redevelopment targets the southeast corner of the 28.5-acre property — the corner next to the intersection of Cambie Street and West 45th Avenue, which is currently occupied by the existing shopping mall’s Safeway store, food court, and one of the parking lots. Portion of the Oakridge Centre site (southeast corner) that will be redeveloped in this February 2019 development application. (Oakridge Centre project team) Coliving: A Solution for Lonely Millennials? Some parts of Commonspace are sure to appeal to twentysomethings looking for friends in the city. 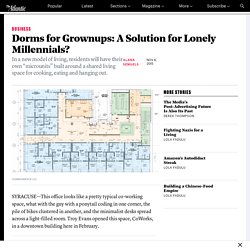 Evans plans to create an online recruiting process that will help him select applicants who fit into the community. Residents will be able to communicate with each other through Facebook groups and Slack channels, and will come together through weekly dinners and pub crawls and will be able to garden together on the rooftop garden. The apartments will be fully furnished to appeal to potential residents who don’t own much (the units will have very limited storage space). In English - ReTuna Återbruksgalleria Eskilstuna. 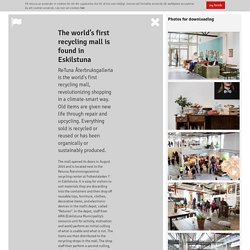 Old items are given new life through repair and upcycling. Everything sold is recycled or reused or has been organically or sustainably produced. The strange, surprisingly radical roots of the shopping mall. Go to Minnesota, follow Route 35 southwest of Minneapolis to the suburban town of Edina, and take the exit onto West 66th Street. 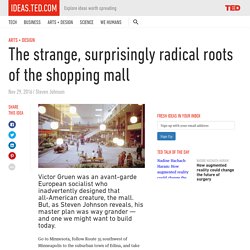 You will eventually find a building complex floating like an island in a gray sea of parking, its exterior a jumbled mix of branded facades: GameStop, P.F. Chang’s, AMC Cinemas. Although this building looks unremarkable, it ended up defining an era: It is the Southdale Center, America’s first mall. Today’s malls have a mostly well-deserved reputation for being the ugly stepchild of consumer capitalism, but their intellectual lineage is more complex than most people realize. Plans revealed for Metrotown Sears site.

The Sears site in Metrotown will be the first redevelopment project under the City of Burnaby’s newly adopted and controversial Metrotown Downtown Plan. 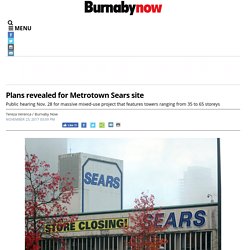 A conceptual master plan and the first phase for the nine-acre site, owned by Concord Pacific Group of Companies, is going to a public hearing next week. Sears Canada sold its Metrotown property two years ago to Concord as part of a three-property deal worth $140 million. The psychology of shopping. Shopping is all about making choices and knowledge of cognitive psychology can help retailers create shopping environments that encourage purchase. 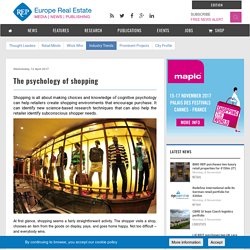 It can identify new science-based research techniques that can also help the retailer identify subconscious shopper needs. At first glance, shopping seems a fairly straightforward activity. The shopper visits a shop, chooses an item from the goods on display, pays, and goes home happy. Not too difficult – and everybody wins. Is this what I want? What if the shopper couldn’t find exactly what they wanted – but made do with the second best option as they were in a hurry? Costco Craze Inside the Warehouse Giant CNBC. 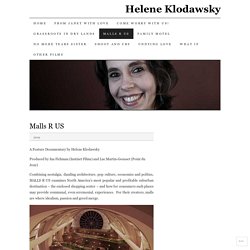 Redefining identity in shopping environments –3rd year interior design studio -presentation. Whose shopping malls and whose shopping streets? Person-environment fit in retail environments. Chinese 'ghost mall' back from the dead - CNN. Enormous Shanghai shopping mall is now China's largest empty building. A giant shopping mall in China designed as a replica of the Pentagon has been left virtually abandoned because the space is too expensive and too confusing.

The $200 million Shanghai Pentagonal Mart, built in 2009, is bigger than the Virginia headquarters of the U.S. Defense Department, sprawling across over 70 acres. But according to the BBC, it’s reportedly the largest vacant building in Shanghai and despite the demand for retail space, has sky-high rent. At the time it was opened, the space was heralded for being a shopping meca with the potential to attract hundreds of thousands of shoppers a day.

Owners Shanghai Megamall said they had signed thousands of tenants, including a number of Western brands. But most are gone and shopkeepers say its interior is like a labyrinth, reports the People's Daily News. Yet, there may be one idea for the space that has local officials wishing upon a star. China's ghost towns and phantom malls. 14 August 2012Last updated at 00:34 By Robin Banerji & Patrick Jackson BBC News Weeds cover a deserted theme park north of Beijing As growth slows, China's huge investment in infrastructure is looking ever harder to sustain, leaving a string of ambitious projects - towns, shopping malls and even a theme park - empty and forlorn. "We have spoken a lot about these ghost towns in Ireland and Spain recently [but China] is Ireland and Spain on steroids," says Kevin Doran, a senior investment fund manager at Brown Shipley in the UK.

China's 'Pentagon' building lies empty. The Effect of Shopping Mall Environment on Shopping Behavior under a Model. “Factors Affecting the Students Decision on Choosing Shopping Mall. Ghost Mall - VICE Video: Documentaries, Films, News Videos. Sears closure an ‘opportunity’ There could be a silver lining to the impending closure of Sears Canada – at least for the people behind the redevelopment of Brentwood Town Centre. Last week, Sears Canada announced it would close its remaining stores effective early in the new year. Best of Vancouver 2014: Brentwood makeover planned decades ago. She Lives In The Oldest Mall In America After 48 Abandoned Shops Are Transformed Into Homes. All across the globe, people are jumping onto the trend of smaller “shoebox” living. Scaling back and and living a more sustainable lifestyle is made possible with compact, repurposed and/or off-the-grid living quarters.

Following in the steps of the sustainable living movement, one housing developer purchased the Providence Arcade — a bankrupted and abandoned mall, which also happens to be the oldest mall in America. The now National Historic Landmark was built in 1828 and was the first indoor shopping mall in the United States. Developer Evan Granoff bought the Providence Arcade in 2005. Micro Apartments in the Mall: Innovation in Abandoned American Malls. The Case for the American Mall. The customer isn't always right. For example, the management at South Coast Plaza would prefer that you, or I, or any visitor for that matter, not refer to the mammoth complex as "a mall. " South Coast Plaza is a luxury shopping experience, and a global shopping destination, home to an "unparalleled collection of 250 boutiques and department stores," including Bulgari, Chanel, and Roger Vivier, among others, in Costa Mesa, California, a quick 20-minute jaunt from the beach.

A promotional video narrated in an unplaceable but unmistakably posh accent concludes, "South Coast Plaza: where the world comes to shop. " Plenty of elevated language is tucked into the Orange County landmark's literature and advertising: premier, critically acclaimed, elegant, exclusive, renowned. But the marketing materials are no smoke-screen. America's Oldest Mall Now Contains 48 Charming Low-Cost Micro-Apartments. With online retailers making shopping an efficient, no-fuss experience, it's no secret that brick-and-mortar malls aren't as popular as they used to be. Yet, what's to be done about the shopping malls that are no longer populated by crowds of shoppers? The Gruen Effect (with transcript) A New Life for Dead Malls. In case you haven’t heard, suburban malls are on the way out (sorry Paul Blart). Some have become abandoned wastelands popular for ruin porn.

Others have been torn down and turned into industrial sites. According to Ellen Dunham-Jones, an architect and professor at Georgia Tech, there are about 1,200 enclosed malls in the United States, and about one-third of them are dead or dying. It Takes a Village: EBSCOhost. Loading... citation_instruction It Takes a Village Detailed Record Title: It Takes a Village.

Calgary Malls: Alive and Well and Booming: EBSCOhost. A Farewell to Mallrats. When I was a young Girl Scout I attended a yearly event called Mall Madness, at which scores of local troops were locked in a mall overnight, until 3 or 4 a.m. The decline of US mall culture. America's Changing Mall Culture. Why Teens Go To Malls. Uk.businessinsider. Why Teens Are the Most Elusive and Valuable Customers in Tech. If Facebook's $19 billion Whatsapp acquisition can be attributed to one single instigator, it's teenagers. Having lost its $3 billion bid for Snapchat, and with teens consistently fleeing Facebook by the millions each year, it's clear that Facebook was willing to pay just about any price to get them back. When the world's largest social network and a major purveyor of data considers this demographic priceless, you pay attention.

How teens are spending money, what they like, and where they shop. The Canadian Shopping Mall: Neither Canadian Nor A Mall, Anymore. There was a time when the Canadian shopping mall was more than a mecca for consumer culture. It was a community space that functioned as an exercise circuit for seniors, a fun escape for moms on maternity leave and the default weekend hangout for teenagers. Today, it's an environment under threat. Death of Canadian malls: Future of suburban shopping centres in jeopardy. The death of the American mall. It is hard to believe there has ever been any life in this place. Are Malls Over? Architectural Afterlife.