Bamboo Living. How To Build The Most Beautiful Modern Two Story Bamboo House. [ Full Video ] Building The Most Creative Luxury Villa And Decoration Private Living Room. The Folding Bamboo Archtecture. Summary Statement: This thesis is to design a Foldable Bamboo Architecture which should be lightweight, foldable ,durable, strong, and be transported easily and installed quickly. 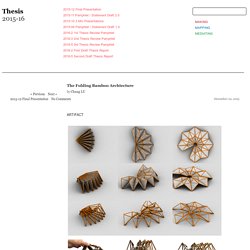 The new design will be inspired by the logic of origami which will be connected to the computation. It exlore the techinical how to make the bamboo structure foldable. The aim of this thesis is to design a Foldable Bamboo Architecture. It is a different structural typology which constitute of bamboo as the main flexible structure. Inspired by the origami, the structure should be lightweight, foldable ,durable, strong, and be transported easily and installed quickly. The site I chose is a county named AnJi which located near to Shanghai. First biennial architecture with bamboo, simply perfect - Somos Verdes. Construções e espaços feitos com bambu, além de serem sustentáveis, nos dão uma sensação de paz e harmonia. 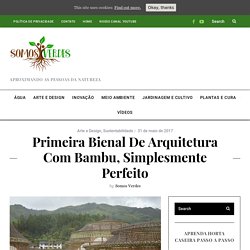 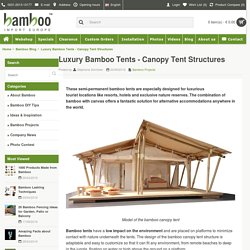 The combination of bamboo with canvas offers a fantastic solution for alternative accommodations anywhere in the world. Model of the bamboo canopy tent​ Bamboo tents have a low impact on the environment and are placed on platforms to minimize contact with nature underneath the tents. The design of the bamboo canopy tent structure is adaptable and easy to customize so that it can fit any environment, from remote beaches to deep in the jungle, floating on water or high above the ground on a platform. The idea behind the luxury bamboo tents is to offer the ultimate eco-friendly dream vacation for tourists around the world while generating income for nature reserves so that they can finance the maintenance and possible expansion of protected areas. Gustavo Correa Ramirez. WOW - Awesome. Incredible Bamboo Architecture in Baoxi, China 2 clicks. Youth Hostel / Design Hotel by Anna Heringer. 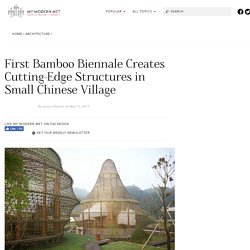 Celebrating bamboo as a construction material, the first International Bamboo Architecture Biennale took place in the small village of Baoxi, China in 2016. The mainly agricultural mountain village is located twelve hours from Shanghai and is now home to these incredible structures designed by twelve international architects. CUBO is a system of modular bamboo homes by earl patrick forlales. Earl patrick forlales, a 23-year-old from manila, has designed a system of low-cost modular residences to help solve housing problems in the philippines. inspired by the materials used on his grandparent’s rural home, forlales explored the potential of bamboo, and, although the scheme has been designed for low-income communities in manila, the ideas behind it can be applied to any city where bamboo can be grown — including most of southeast asia and parts of africa and latin america. the project recently won the RICS cities for our future competition with a population of more than 12 million people, manila is one of the fastest growing megacities in east asia. currently, a third of the city’s population live in slums, with 2.5 million workers expected to move to manila in the next three years to work on the government’s infrastructure program. forlales’ design — named ‘CUBO’ — could be used to house the incoming worker population in the short term, before being applied to the wider city.

IBUKU Create a Series of Low-Tech Bamboo Shelters for a Recycling Plant in Indonesia. This project from the island of Bali in Indonesia saw the construction of several low-tech, economical houses. 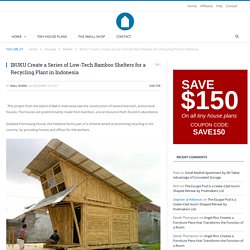 The houses are predominantly made from bamboo, a local resource that’s found in abundance. Dubbed Premulung House, the initiative forms part of a scheme aimed at promoting recycling in the country, by providing homes and offices for the workers. The design of the residences and other buildings was undertaken by a local architecture firm called IBUKU. They, in conjunction with the client, produced a series of designs that would accommodate the needs of the families that would live there, and the needs of the recycling plant.

NewEarth Haven - Amethyst Crystal Dome - Bungalows for Rent in Ubud, Bali, Indonesia. How to Bend Bamboo — Guadua Bamboo. Bamboo poles aren't always straight, and when working on a particular project, bends may cause technical difficulties or are just unwanted for aesthetic reasons. 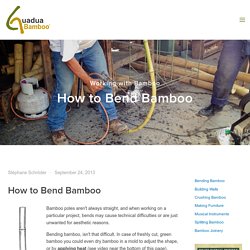 Bending bamboo, isn't that difficult. In case of freshly cut, green bamboo you could even dry bamboo in a mold to adjust the shape, or by applying heat (see video near the bottom of this page). However, once dry, bamboo cannot be bend anymore (in a permanent lasting shape that is). In bamboo furniture construction, fencing, artisan works, bends are often corrected with a cut, and this technique works for either round bamboo canes or split bamboo. Make a V-shaped cut just below the node, try to make the cut as close as possible towards the node, this will make the correction less visible! Learn to Build a Roof Out of Bamboo. This entry was posted on November 13, 2018 by admin. 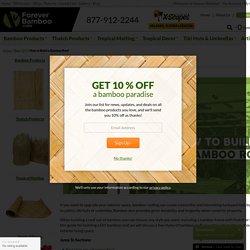 If you want to upgrade your exterior space, bamboo roofing can create a beautiful and interesting backyard look by adding tropical appeal to patios, tiki huts or umbrellas. Bamboo also provides great durability and longevity when cared for properly. When building a roof out of bamboo, you can choose any style you want, including a bamboo frame with thatch or a bamboo tiled roof. 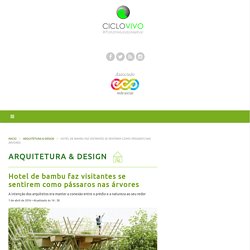 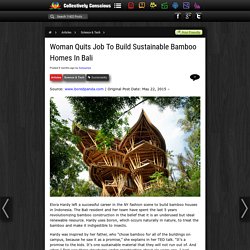 The Bali resident and her team have spent the last 5 years revolutionizing bamboo construction in the belief that it is an underused but ideal renewable resource. Hardy uses boron, which occurs naturally in nature, to treat the bamboo and make it indigestible to insects. Hardy was inspired by her father, who “chose bamboo for all of the buildings on campus, because he saw it as a promise,” she explains in her TED talk. “It’s a promise to the kids. Beautiful Sustainable Bamboo Pavilion in Indian Ocean Ring. Bamboo-Pavilion-Interior-View Australian designer Esan Rahmani worked together with Mukul Damle to design this beautiful Bamboo Pavilion as a communal shelter for disadvantaged populations around the Indian Ocean Rim. 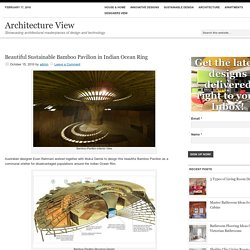 Bamboo-Pavilion-Structure-Design Since bamboo are alredy well know as building material from channeling water to building roofs wich grows throughout Asia and can be used for any number of applications. Bamboo-Pavilion-Roof-Stanchion. Penda's Fastener-Free, Re-usable Bamboo Structural System. Something you see a lot of in New York is workers assembling or disassembling a metal scaffold, but you almost never see them made out of new-looking pipes. The banged-up metal is a testament to how much use they see over their lifetimes. In contrast, you'll also see workers assembling and disassembling temporary facades out of 2x4s and CDX, but the difference is, the wood all goes into a garbage dumpster at the end, riddled as they are with screws and screw holes.

They don't live to see another day, unlike the metal scaffolding. Beijing-based architecture firm Penda has made a similar observation by looking at Native American tipis. When it's time to move on, the nomadic owners untied the rope bindings for the pole structure, bundled it together for transport, then put it up somewhere else. Thus Penda's "One With the Birds" project, which takes the local-to-China material of bamboo and binds it together with rope in a triangular matrix pattern that can then be built out. Via Arch Daily. Corrugated Bamboo Roofing Sheets — Guadua Bamboo.

Corrugated bamboo roofing sheets on the other hand are cheaper, stronger, more durable, eco-friendly, and have better thermal and sound isolation. For all those reasons, bamboo proves to be a superior substitute for zinc roofing with an enormous market potential. The development of corrugated bamboo roofing sheets doesn't only make commercial sense, it also has a long term environmental and social impact as it offers income generating opportunities for rural communities involved in all stages of the production. A unit producing 500,000 m2 of roofing sheet per year will create direct and indirect employment for more than 200 people. Green Village. The bamboo homes of Bali - Videos.

Gizmag has featured several low-cost bamboo housing prototypes before, including the Blooming Bamboo home and the Bamboo Lakou vision for Haiti, but the units designed for this project are on a much smaller scale. The two-story prototype unit featured here measures just 15 sq m (161 sq ft), while still featuring a living area, kitchenette, bathroom, fold-out dining table, work area, and sleeping quarters.

A big challenge at music festivals is finding shelter from the heat and sun, but a sprawling bamboo art installation gave attendees at last year's Woodwork Folk Festival plenty of shade to stand under. Taiwanese sculptor Wang Wen-Chih teamed up with the Sydney-based architecture and design-collective Cave Urban to create Woven Sky, a 300-foot-long shaded tunnel and tower installation in Woodford, Australia. Woven together from locally harvested bamboo and radiata pine logs, the sprawling tunnel took 40 workers and volunteers three weeks to build. Tour This Incredible Green Village in Bali of All-Bamboo Homes, Crafted By Ibuku. The Green School Showcases The Incredible Potential of Bamboo Construction in Indonesia. The Green School was established side-by-side with the non-profit Meranggi Foundation, which develops bamboo plantations by presenting seedlings to local rice farmers. Talks to Elora Hardy, Founder of Ibuku, About the Creative and Sustainable Potential of Bamboo.

Bamboo Architecture Collection. Documentary reveals Vo Trong Nghia, Vietnam's visionary bamboo architect. Rapidly developing nations are a wild frontier of sorts for sustainable design and architecture; often building codes are lax or non-existent here, allowing local architects to experiment more freely with unconventional ideas and materials. The Reality about Building with Bamboo. Bamboo for Africa. Bamboo Architecture: 12 Stylish & Sustainable Structures - WebEcoist. Tiny Houses Made Of Bamboo, Hiding Inside Abandoned Hong Kong Factories. With more than 7 million people living within a little over 400 square miles, Hong Kong doesn’t have much space for new housing. It’s also an incredibly expensive place to live--so much so that the poorest residents often end up renting tiny, rundown “cage homes” that are only big enough for a bed. Architects from AFFECT-T now hope to help with a new set of modular bamboo homes that can be built as a mini-neighborhood inside old factories and other former industrial buildings.

The factory walls would provide protection from weather and insulation, along with hookups to city services. Since there’s so much space between floors in industrial buildings, there would be room for two stories of living space in each home. And most importantly, reusing the old factories will open up opportunities for transitional housing in prime locations. Traditional Bamboo Floating Homes Updated. A Vietnamese architecture firm with a portfolio of modern public buildings has turned its hand to perfecting indigenous low-cost houses. Appropriate Building Materials: a Catalogue of Potential Solutions: Examples of building systems: Bamboo houses.

• The examples of bamboo houses shown on the following pages are taken from the excellently illustrated bamboo construction manual by Oscar Hidalgo Lopez (Bibl. 24.07). • All the structural components and most of the non-structural parts (floors and wall cladding) are made of bamboo. Bamboo Buildings. Building with Bamboo: 13 Super Sustainable Structures.