App store annoyances. (Popping back in briefly: Nicola will be back again with a new essay on Thursday.) 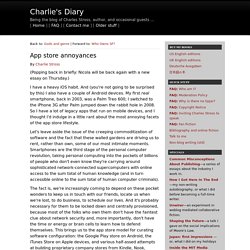 I have a heavy iOS habit. And (you're not going to be surprised by this) I also have a couple of Android devices. My first real smartphone, back in 2003, was a Palm Treo 600; I switched to the iPhone 3G after Palm jumped down the rabbit hole in 2008. So I have a lot of legacy apps that run on mobile devices, and I thought I'd indulge in a little rant about the most annoying facets of the app store lifestyle. Let's leave aside the issue of the creeping commoditization of software and the fact that these walled gardens are driving us to rent, rather than own, some of our most intimate moments.

The fact is, we're increasingly coming to depend on these pocket wonders to keep us in touch with our friends, locate us when we're lost, to do business, to schedule our lives. For most mobile apps I use iOS. But now for my main gripe. . * Abandonware. . * Take-overware. . * Forced upgrade-ware. Apple iPhone 6 microphone not working, callers can’t hear [Troubleshooting Guide] This article tackles a microphone problem with the Apple iPhone 6 (#Apple #iPhone6) along with the recommended workarounds used by other #iPhone users who have experienced the same problem on their handset. 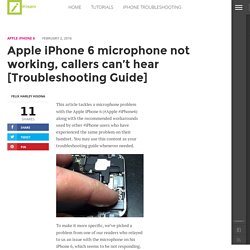 You may use this content as your troubleshooting guide whenever needed. To make it more specific, we’ve picked a problem from one of our readers who relayed to us an issue with the microphone on his iPhone 6, which seems to be not responding. Read on for more information and learn how to fix the problem should you also encounter it on your device. AWS Continuous Learning. Andrew, you are Engineering Director for Tuple Labs, yet you find time to regularly contribute to the AWS community. 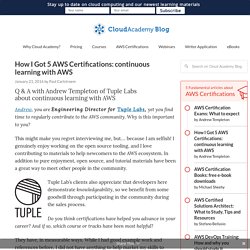 Why is this important to you? This might make you regret interviewing me, but… because I am selfish! I genuinely enjoy working on the open source tooling, and I love contributing to materials to help newcomers to the AWS ecosystem. In addition to pure enjoyment, open source, and tutorial materials have been a great way to meet other people in the community. Tuple Lab’s clients also appreciate t hat developers here demonstrate knowledgeability, so we benefit from some goodwill through participating in the community during the sales process. CRM for Gmail. Ibrian. Home. Product. Apple (app) Design Awards winner: Streaks.

WAMI. Product Creation Studio. Hong Kong Edition. Better Than Siri. Better Than Siri. Follow these instructions to have GoogolPlex set up in under 30 seconds: On your you iOS device, go to Settings > Wi-Fi On your selected network, click the Scroll down and select "Auto" under "HTTP PROXY" Enter in the URL field exactly as shown Now you can begin using GoogolPlex! 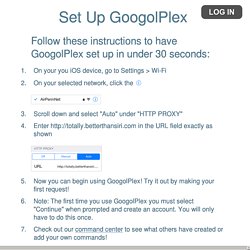 Try it out by making your first request! Note: The first time you use GoogolPlex you must select "Continue" when prompted and create an account. Try out GoogolPlex by asking Siri the following: "GoogolPlex, play Demons" (Spotify) "GoogolPlex, turn on my lights. " Free PPC Crash Course - thanks. 5 Apple Rumors: From iPhone 6c and 7 to Apple TV Updates. Looking to catch up on the latest rumors about Apple’s plans and products in your holiday downtime? 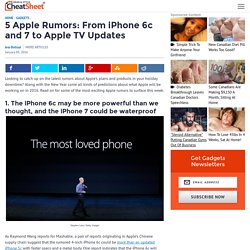 Along with the New Year come all kinds of predictions about what Apple will be working on in 2016. Read on for some of the most exciting Apple rumors to surface this week. 1. The iPhone 6c may be more powerful than we thought, and the iPhone 7 could be waterproof Stephen Lam/ Getty Images As Raymond Wang reports for Mashable, a pair of reports originating in Apple’s Chinese supply chain suggest that the rumored 4-inch iPhone 6c could be more than an updated iPhone 5c with faster specs and a metal body.

The other report — which doesn’t clarify whether it’s talking about the new, smaller iPhone or the next-generation iPhone 7 — claims that Apple’s next iPhones could be waterproof and “use new compound materials to hide the antenna,” which is exposed on the back of the iPhone 6 and iPhone 6s and has attracted significant criticism. 2. Source: Apple.com 3. 4. 5. Josh Edelson/AFP/Getty Images. 2Do. Hodgkin lymphoma five year survival. The Euclid Space Telescope reveals new insights into dark matter and dark energy Euclid – named after the ancient Greek mathematician – is part of the European Space Agency (ESA) Cosmic Vision programme, with NASA providing some assistance in the form of instrumentation and scientific analysis. 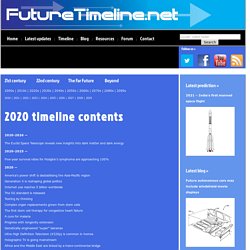 Launched in 2020 and placed at Sun-Earth Lagrange point L2, its mission duration is six years, during which time it studies the nature of dark matter and dark energy.* Matter as we know it – the atoms in the human body, for example – is only a fraction of the total matter in the known universe. While dark matter pulls matter together, dark energy is pushing the universe apart, at an ever-increasing speed. Tour - Unlimited Books.