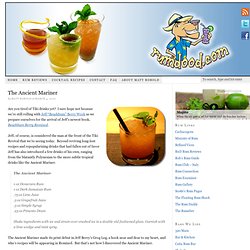 I sure hope not because we’re still rolling with Jeff “Beachbum” Berry Week as we prepare ourselves for the arrival of Jeff’s newest book, Beachbum Berry Remixed. Jeff, of course, is considered the man at the front of the Tiki Revival that we’re seeing today. Beyond reviving long-lost recipes and repopularizing drinks that had fallen out of favor Jeff has also introduced a few drinks of his own, ranging from the blatantly Polynesian to the more subtle tropical drinks like the Ancient Mariner. The Ancient Mariner1 oz Demerara Rum 1 oz Dark Jamaican Rum .75 oz Lime Juice .5 oz Grapefruit Juice .5 oz Simple Syrup .25 oz Pimento DramShake ingredients with ice and strain over crushed ice in a double old-fashioned glass. Garnish with a lime wedge and mint sprig. The Ancient Mariner made its print debut in Jeff Berry’s Grog Log, a book near and dear to my heart, and who’s recipes will be appearing in Remixed.

No, I was introduced to the Mariner in a bar. Nectarine + mint cocktail. September 9th, 2011 Well, it’s been a difficult week for me, but the hard one’s make the good ones even better, right? 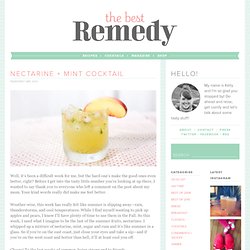 Before I get into the tasty little number you’re looking at up there, I wanted to say thank you to everyone who left a comment on the post about my mom. Your kind words really did make me feel better. Weather-wise, this week has really felt like summer is slipping away—rain, thunderstorms, and cool temperatures. While I find myself wanting to pick up apples and pears, I know I’ll have plenty of time to use them in the Fall.

Raspberry Blackberry Smoothie Recipe. Kendra, here's what to do with that pesky rum. I am always happy to help a friend. 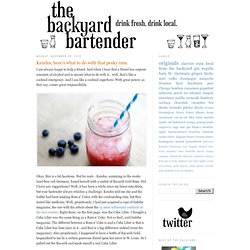 And when I hear that a friend has copious amounts of alcohol and is unsure what to do with it...well, that's like a cocktail emergency. And I am like a cocktail superhero. With great power, as they say, comes great responsibility. Okay, this is a bit facetious. But for reals - Kendra, sojurning in the exotic land they call Germany, found herself with a surfeit of Bacardi Gold Rum. Cuba Libre (with thanks to Imbibe magazine and Jonathan Phillips.) 4-5 oz Coca-Cola 2 oz Bacardi Gold Rum juice and peels of half a lime Squeeze the lime and then drop it into the glass.

Verdict: The lime definitely adds a little something. But I wasn't going to stop with just a dressed-up Rum n' Coke. My third cocktail was much better. 1. With all this going on, it wasn't too long until: *If you have fresh blueberries, they will work just as well as the frozen ones. Cover the bottom of an old fashioned glass with the thawed blueberries.

Eat Boutique - handmade food giftbox, homemade, homespun, gift basket, food that hugs you back. When I first heard about Maine Distilleries earlier this year, I was mostly interested in their source for potatoes. 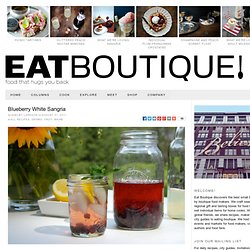 Unusual, yes, but I noticed that they used potatoes from Fryeburg, the pretty, quiet town next to where my family owns a cottage in Western Maine. Anytime I see any of these little-known towns mentioned in the mainstream media, my ears perk up. People just don’t really talk about Fryeburg that often, unless it’s in reference to their famous fair held each October. It’s the same for much of the lakes region, which is typically eclipsed by Maine’s rocky coast and quaint towns down east. So as you can imagine, when I realized that the primary ingredient of this vodka came from the same potato fields that were along my favorite bike route, I knew I had to get my hands on a bottle. I hatched a plan to visit the Freeport headquarters of Maine Distilleries on the way back from my trip to Mid-Coast Maine (even I can’t resist the call of the Maine coast from time to time). Golden Glove - Rum Cocktail. Vanilla Vodka Chai Tea. Saturday, September 10, 2011 Vanilla Vodka Chai Tea Happy (day-after)Friday, folks. 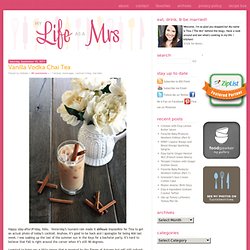 Yesterday’s tsunami rain made it difficult impossible for Tina to get an actual photo of today’s cocktail. Anyhow, it’s good to be back and I apologize for being MIA last week. I was soaking up the last of the summer sun in the Keys for a bachelor party. I wanted to bring you a little sipper that is inspired by the flavors of Autumn but will still refresh you if your local temperature still think it’s summer vacation.