Uber Turns to Saudi Arabia for $3.5 Billion Cash Infusion. Photo SAN FRANCISCO — In its quest to build a global empire, Uber has turned to the Middle East for its biggest infusion of cash from a single investor. 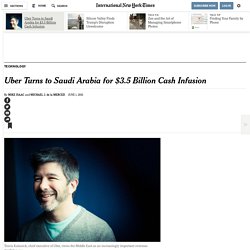 Uber said on Wednesday that it had raised $3.5 billion from ’s Public Investment Fund, the kingdom’s main investment fund, in one of the largest-ever investments into a privately held start-up. The money was part of the ride-hailing giant’s most recent financing round and continued to value Uber at $62.5 billion. The investment, which was months in the making, does not cash out any of Uber’s existing investors. Uber, which has viewed the Middle East as an important area in its expansion, said the investment further aligned the company with Saudi Arabia as the kingdom planned to transform its economy, reducing its dependence on oil and improving employment. Until now, Saudi Arabia has not been known for venture capital investing, though some members of its royal family have made some deals. Continue reading the main story. Startup Investing Trends. June 2013 (This talk was written for an audience of investors.) 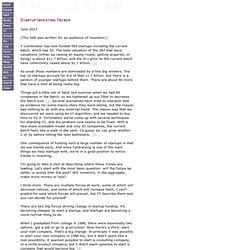 Y Combinator has now funded 564 startups including the current batch, which has 53. The total valuation of the 287 that have valuations (either by raising an equity round, getting acquired, or dying) is about $11.7 billion, and the 511 prior to the current batch have collectively raised about $1.7 billion. [1] Why Startups Should Raise Money at the Top End of Normal. Editor’s Note: This is a guest post by Mark Suster (@msuster), a 2x entrepreneur, now VC at GRP Partners. 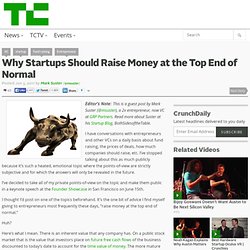 Read more about Suster at his Startup Blog, BothSidesoftheTable. I have conversations with entrepreneurs and other VCs on a daily basis about fund raising, the prices of deals, how much companies should raise, etc. How Much Money To Raise. Image via Wikipedia I spent some time yesterday talking to an entrepreneur about this topic and I thought I'd share what I told him with everyone. 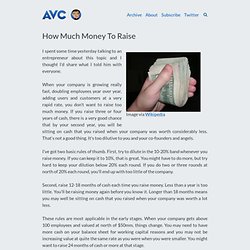 When your company is growing really fast, doubling employees year over year, adding users and customers at a very rapid rate, you don't want to raise too much money. If you raise three or four years of cash, there is a very good chance that by your second year, you will be sitting on cash that you raised when your company was worth considerably less. That's not a good thing. It's too dilutive to you and your co-founders and angels. I've got two basic rules of thumb. Second, raise 12-18 months of cash each time you raise money. The anatomy of a fundable startup. This post is sponsored by The Founder Institute. 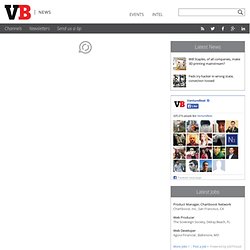 As a co-founder of several companies, an angel investor in several more, and co-maintainer of two great resources for entrepreneurs — AngelList and Venture Hacks — Naval Ravikant has a unique view of the startup and investing landscape. That’s why he was asked to speak at the Founder Showcase event last week in San Francisco to almost 500 founders and investors, and he did not disappoint. In a great speech appropriately titled “The Anatomy of the Fundable Startup,” Naval broke down the 5 main qualities of an “exceptional startup”: 1. Traction - “Traction trumps everything” - “You want to have about 20% a month growth to look like a hot company” 2. 3. How does a VC value a business? « The Equity Kicker.

Thirteenth in a series of weekly posts by myself and Nicholas Lovell of Gamesbrief which answer the fifty questions you should ask before raising venture capital. 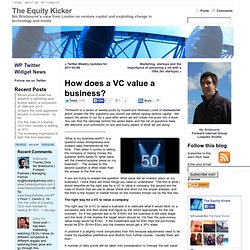 We expect the series to run for a year after which we will collate the posts into a book. You can find the rationale behind the series here, and the list of questions here. What can I do to control the timetable/reduce the time it takes to raise venture capital? « The Equity Kicker. Twelfth in a series of weekly posts by myself and Nicholas Lovell of Gamesbrief which answer the fifty questions you should ask before raising venture capital. 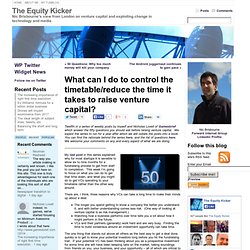 We expect the series to run for a year after which we will collate the posts into a book. You can find the rationale behind the series here, and the list of questions here. There Aren't Many Exits Over $100mm. I was reading Mark Suster's latest blog post (actually its a presentation embedded into a blog post) and I came across this slide. 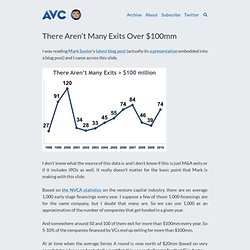 I don't know what the source of this data is and I don't know if this is just M&A exits or if it includes IPOs as well. It really doesn't matter for the basic point that Mark is making with this slide. Based on the NVCA statistics on the venture capital industry, there are on average 1,000 early stage financings every year. Color Looks To Reinvent Social Interaction With Its Mobile Photo App (And $41 Million In Funding) $41 million. 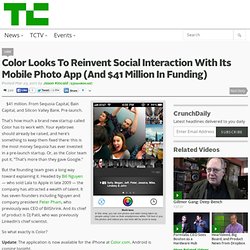 From Sequoia Capital, Bain Capital, and Silicon Valley Bank. Pre-launch. That’s how much a brand new startup called Color has to work with. Your eyebrows should already be raised, and here’s something to keep them fixed there: this is the most money Sequoia has ever invested in a pre-launch startup. COLOR: Here's What No One Understands About The Huge $41 Million Round. Color Labs (startup): As a VC, how is a $41 million investment in Color justified.