The Matrix Resurrections Trailer Wants to Free Your Mind (Again) When The Matrix Revolutions ended in 2003, few could have guessed we’d be here today, almost 20 years later, going back to where it all started. 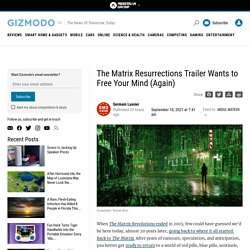 Back to The Matrix. After years of rumours, speculation, and anticipation, you better get ready to return to a world of red pills, blue pills, sentinels, agents, and more. Please enjoy watching the tremendous spectacle that is The Matrix Resurrections trailer. NFP. Biodiversity. Tiny homes. 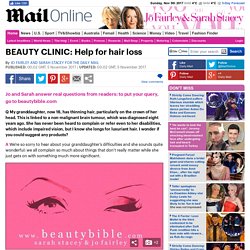 Tech Ideas. Trends. Incubator. Furniture. Coffee. Capital flight, not debt, could shock China's economy: BTIM's Gor warns. Business Resources. Crowdfunding. Dental. Free POS Software. Let’s not forget about the ‘Customer’ in ‘Customer Relationship Management’ - Salesforce Australia & NZ Blog. Amongst all the talk of innovation at Salesforce’s annual Dreamforce conference in San Francisco, a key learning was the importance of exploring why we innovate, and the drivers behind innovation. 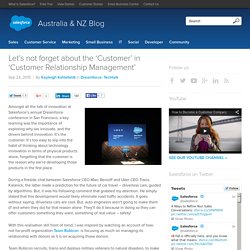 It’s the customer. It’s too easy to slip into the habit of thinking about technology innovation in terms of physical products alone, forgetting that the customer is the reason why we’re developing those products in the first place. 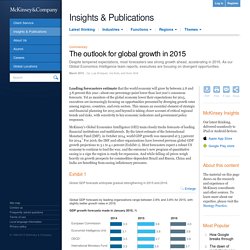 Yet as monitors of the global economy lower their expectations for 2015, executives are increasingly focusing on opportunities presented by diverging growth rates among regions, countries, and even sectors. This means an essential element of strategic and financial planning for 2015 and beyond is taking closer account of critical regional trends and risks, with sensitivity to key economic indicators and government policy responses. 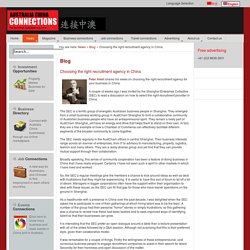 A couple of weeks ago I was invited by the Shanghai Enterprise Collective (SEC) to lead a discussion on how to select the right recruitment provider in China. Identified Recruitment Agents for Chinese Skilled Workers. On this page Australia and The People’s Republic of China have a Memorandum of Understanding in place that establishes an ethical framework for Chinese recruitment agents to supply Australian employers with skilled overseas workers. 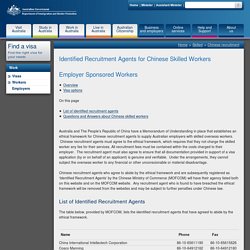 Chinese recruitment agents must agree to the ethical framework, which requires that they not charge the skilled worker any fee for their services. All recruitment fees must be contained within the costs charged to their employer.

Do I need insurance as a sole trader? Overseas workers will be allowed to work for a year without applying for 457 visas. Workers protest about 457 Visas in 2013. 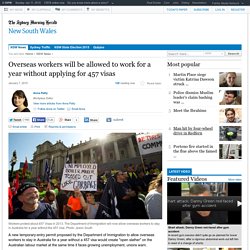 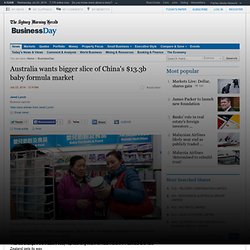 Photo: Sim Chi Yin It is worth about $13.3 billion and growing, but only four Australian companies have access to China's lucrative infant formula market. That will change if the industry body representing infant formula makers in Australia and New Zealand gets its way. So you want to be a rock star? Better get a day job and be prepared to borrow your mum’s car. Innovative approach ... 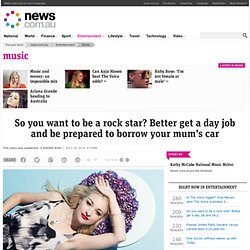 Kate Miller-Heidke crowdsourced funds for her latest album. Picture: Ric Frearson Source: Supplied AN Australian band would have to turn over $1 million to earn the average wage, according to a candid new documentary The Truth About Money In Music. Amazon, Twitter, JB Hifi and Groupon may be worth billions but their profit margins are tiny. Amazon has struggled to generate any kind of meaningful profit for years. 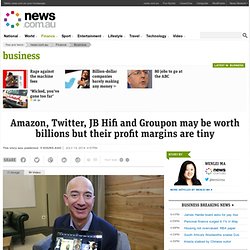 Source: AP Amazon unveiled the Fire Phone, which features unlimited photo storage and a hologram-like visual effect. Will it be enough to crack the crowded market? SunTrust managing director Robert Peck discusses on the News Hub with Sara Murray. Price of gold set to rise as price fixing under review. The way the gold price is set is up for review after a major rigging scandal. Source: AP LONDON’S century-old gold price fixing, tainted by a rigging scandal and attacked by critics as old-fashioned, goes under the spotlight this week in key talks aimed at modernising the process. Analysts said that the market price of gold, which is driven by investment and jewellery demand, could climb as a result of an overhaul.

Buyers and sellers of the precious metal will meet in London on Monday to discuss the setting of the global benchmark, which affects the flow of billions of dollars worldwide every day. 26 startups in Asia that caught our eye (15 June 2014) Here’s our newest round-up of the featured startups on our site this week. If you have startup tips or story suggestions, feel free to email us or tell us about your startup on this form. Any juicy tech news tips go here. Tech giants pour resources into artificial intelligence. Singular vision: Silicon Valley's biggest companies are vying with each to build a fully functional artificial brain. Illustration: Doug Griswold/MCT Photo: MCT The latest Silicon Valley arms race is a contest to build the best artificial brains. Facebook, Google and other leading tech companies are jockeying to hire top scientists in the field of artificial intelligence, while spending heavily on a quest to make computers think more like people.

Lexxe - Natural Language Search. Lexxe. Lexxe pledges semantic search in 2012. Aussie Lexxe challenges search engines. An Australian-based start-up is seeking to challenge search engines such as Google with its own engine that uses semantic keys to aid search queries. 10 Web Tools To Try Out Sentiment Search & Feel the Pulse. Why companies including GE, Apple, Coca-Cola and more are incorporated in Delaware. Egomotion Raises $750K From Android’s Co-Founder And Others To Make Your Smartphone Smarter. Back in November, I wrote about an Android app called Agent. Australia's trade performance sinks. On market access that measures the extent and complexity of a country's tariff regime, Australia now ranks 74th, having been 44th in 2008.

What kills more people than AIDS, diabetes and road injuries? Singapore government reveals latest measures to turn country into an innovator's haven. What it means for travellers as Qantas tries to fill a $2 billion hole in its finances. Plastic & Cardboard Recycling - Clients. Meet the Aussie young guns that could become the next big thing. Internships Down Under. AIFS Professional Internship Australia. Student Internships in Australia.

Best of 2013: The Future of Off-The-Grid Living Looks Promising. UK engineer creates the QB2 'cube house' that can be built in hours.